Why America Just Got Serious about Sanctioning Russia 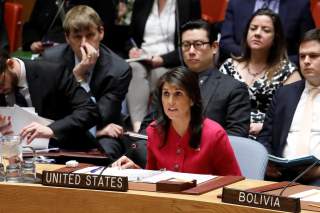 Like any other restriction, sanctions cause discomfort. If the restriction is mild, it is easy to adapt or tolerate the pain. But if the constraint is tighter, then the desire to overcome it becomes very strong. Sanctions are an acceptable diplomatic tool—but this tool works only if those imposing sanctions clearly and consistently articulate their goals. In order for sanctions to work, it is necessary to adjust their rigidity depending on the behavior of those against whom sanctions are applied.

In early 2014, Russia annexed the Crimean Peninsula, part of Ukraine’s sovereign territory. Since April 2014, Russian authorities have supported the actions of illegal armed groups in eastern Ukraine, resulting in the deaths of more than ten thousand people. In response to Russia’s aggression, Western countries imposed coordinated sanctions against Russian individuals, banks and companies. The announced intent was to get Russia to abandon its aggressive policy, and the main mechanism of sanctions was to increase the economic costs of aggression. However, the following four years showed that the West could not achieve its goal of setting a high enough price for the Kremlin to desist.

The hot phase of the conflict in the Donbas region had ended by March 2015, after Russian troops helped rebels to gain control of the strategically important city of Debaltseve. European countries’ efforts to push Russia toward an end to the conflict within the framework of the Minsk process was met with resistance by Moscow. U.S. attempts to help seek a path out of conflict, in the framework of negotiations between Victoria Nuland (and later Kurt Volker) and Vladislav Surkov, were unsuccessful, breaking down from the Kremlin’s unconstructive position. A part of Ukrainian territory that is more than twice the size of Israel remains outside central government control. Despite the cease-fire, people continue to die.

In late 2014 and early 2015, many thought that the imposed economic sanctions had put considerable pressure on Russia: the ruble rapidly lost value, financial markets were falling and the economy teetered toward recession. However, it soon became clear that this assessment was exaggerated. Besides sanctions on the Russian economy, a rapid decline in world oil prices and a peak in payments for corporate external debt, which also occurred during this period, had a much greater impact. By the spring of 2016, the impact of sanctions on the Russian economy was no longer felt, and an increase in oil prices and growth in global demand for commodities helped the Russian economy avoid continued recession. Experts discuss the “invisible” impact of sanctions, which cannot be measured by statistics: in this case, the political risks of doing business in Russia made investments in this country unacceptable to most Western businesses, which served as a barrier to the transfer of modern technology to Russia. In the long term, this will certainly lead to a degradation of the Russian economy, but today the Kremlin does not take this challenge into consideration.

The obvious ineffectiveness of sanctions against Russia, on the one hand, is due to their obvious weakness—the degree of their pressure did not exceed a fraction of that imposed against Iran in 2012. On the other hand, it has been clear since at least 2015—when, after the signing of the Minsk agreements, the West did not react at all to Russia’s military support for the offensive in Debaltseve—that there is little desire for any further pressure on Russia. Ukraine was not a priority for President Obama, and he sought to avoid an aggravation of relations with Russia. And for the European Union, the economic effects of sanctions were much more strongly felt than for the United States, and met strong resistance in key countries including Germany, France and Italy.

During 2016, the West’s focus on Russian territorial aggression continued to decline, amid Brexit negotiations and elections in France, Germany and the United States. The Kremlin took advantage of this pause to expand its hybrid war, turning its attention from Ukraine to the principal Western powers. Russia began to actively intervene in electoral processes and foment political instability. Hacking, disinformation and the manipulation of public opinion through social networks have become the new instruments of aggression. Although much of this became apparent by the second half of 2016, the West—and especially the United States—did not react at first. The Kremlin received confirmation of the hypothesis, widespread in Russia, that Western politicians are too weak and ill prepared to confront Russia.

President Donald Trump’s arrival in the White House did not change much in practice. Throughout 2017, Washington’s Russia policy remained vague and ill articulated, as rigid assessments of Russia’s actions alternated with presidential messages demonstrating readiness to meet with Vladimir Putin and make a deal.

An obvious change in the administration’s position occurred in early 2018, after the submission of two reports to Congress, as set out in the Countering America’s Adversaries Through Sanctions Act. In isolation, the reports were widely seen as weak—one contained a ninety-six-person list that included government officials, as well as of all Russians who, according to Forbes magazine, had a fortune in excess of $1 billion, while in the other, the Treasury Department reasoned that it would be impractical to impose a ban on purchases of Russian debt.

These reports were perceived as a sign of the administration’s unwillingness to resist Russian hybrid aggression, and caused a great wave of criticism in Congress and the media. However, after this there followed a series of statements and actions, which showed that such an assessment was at least untimely:

• in February, the White House issued a statement about Russia’s involvement in the launch of the destructive NotPetya virus;

• also in February, Special Counsel Robert Mueller made official accusations of interference in the election of Evgeny Prigozhin and other leaders of the so-called “troll farm”;

• in March, a statement from the FBI and Department of Homeland Security revealed Russia’s cyberattacks on U.S. infrastructure;

• after the March poisoning of Sergei Skripal and his daughter in the United Kingdom, the United States joined a coordinated action of over twenty countries to expel Russian diplomats and decided to close the Russian consulate in Seattle;

• most recently, the United States ambassador to the UN, Nikki Haley, has announced America’s readiness to impose sanctions related to Syria.

All this has happened within about eight weeks, which demonstrates a sudden increase in the rigidity of Washington’s Russia policy. It is likely that the administration has become more serious about perceiving Russia’s actions as a serious threat to U.S. national interests. By taking these steps, the administration has sharply expanded the range of claims against the Kremlin—if earlier sanctions were related to Russia’s aggression in Ukraine, now the focus is on threats to the United States. The administration appears to have become more unified in assessing threats from Russia and preparing to resist them.

Unlike the sanctions introduced in 2014, the latest decisions have had a much more serious and systemic impact on the Russian economy. Public flogging of Rusal and its principal shareholder has destroyed a significant portion of shareholders’ value and put its production facilities on the edge of freezing. For owners of other major Russian assets, the threat of sanctions has become much more serious, which gives grounds for a growth in quiet rejection of Putin. (This does not, however, guarantee the transformation of this discontent into a political confrontation.) For Putin, the shutdown of the largest factories will demonstrate that the pressure of sanctions, and their economic and social effect within Russia, might be much more serious than he had thought.

One vulnerability of the last eight weeks’ actions is that the United States has not been able to gain EU support for new individual sanctions. Unlike in 2014, when the decisions to impose sanctions were coordinated, the lack of European support for the latest U.S. decisions could ease pressure on Russia.

On one hand, these eight weeks have undoubtedly highlighted the foundation on which America’s Russia policy will be built. At the same time, all that happened made it very difficult to find the framework of any deal that President Trump wants to sign with Vladimir Putin. Before, the Kremlin could have won an easing of sanctions in exchange for the return of the Donbas to Kiev; now Ukraine is just one—and not the most important—piece in the new puzzle.

Sergey Aleksashenko is nonresident senior fellow in Global Economy and Development at the Brookings Institution. Former deputy chairman of the Central Bank of Russia and former chairman of Merrill Lynch Russia, he focuses on transition process in the CIS and eastern Europe, monetary policy and international financial infrastructure.

Image: The last eight weeks have undoubtedly highlighted the foundation on which America’s Russia policy will be built.