Why Washington May Soon Be Unable to Protect Its Allies 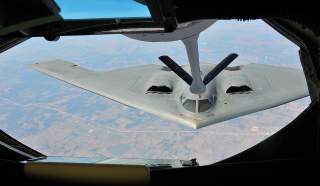 President Donald Trump will soon fill his administration with the political appointees needed to develop the next Nuclear Posture Review (NPR). As a document that lays out the nation’s fundamental nuclear strategy and policy, the NPR is the most influential document when it comes to both communicating to internal (Department of Defense, State Department, Energy Department) and external (Russia, China, NATO, Korea, Japan) audiences exactly what the United States thinks and how it will act when it comes to nuclear deterrence and the use of nuclear weapons.

One of the central questions the authors of the next NPR must examine is the continued credibility of American extended deterrence and the nation’s “nuclear umbrella.” For more than five decades, NATO member states, Japan and Korea have relied on the United States’ willingness to trade New York for Berlin, Tokyo, or Seoul in the event a conflict goes nuclear. However, the credibility of this assumption is facing increasing scrutiny. Let us explain.

The strategic triad has been the foundation of our nuclear posture for over fifty years. Each leg of the triad serves a critical role:

-    the land-based intercontinental ballistic missiles are responsive, with the ability to launch within minutes of receiving an emergency action message;

-    the sea-based leg of submarine launched ballistic missiles is survivable, ensuring the ability of a second strike.

The purpose of the nuclear triad is to deter U.S. adversaries from striking the homeland, assure our allies of the credibility of American extended deterrence, and strike our adversaries if required. Since the early days of the Cold War, homeland-based strategic nuclear weapons were supplemented by forward-deployed systems whose primary purpose was to assure U.S. allies in NATO and Asia (Japan and Korea) that if they were attacked, then the United States’ “nuclear umbrella” would protect them from common adversaries. These systems were and are often referred to as “tactical nuclear weapons” or “nonstrategic nuclear weapons,” although there is nothing nonstrategic about the implications of their use.

During the Cold War they comprised a system that can be called the tactical triad. Although weapon delivery times were significantly less, the attributes of the tactical triad were similar to those of the strategic triad: (A) land-based systems (artillery-fired atomic projectiles), ground-launched cruise missiles, and Pershing II ballistic missiles were responsive; (B) dual capable aircraft were flexible; and (C) sea-based systems (tomahawk land attack missile–nuclear) were survivable.

Together, the systems that made up the strategic triad and those that made up the tactical triad formed a prism, with each node of the prism representing a critical function in deterring our enemies and assuring our allies. This was the system that existed at the end of the Cold War.

Since the end of the Cold War, the structure of the strategic triad has remained fairly stable, though the numbers of each type of warhead and delivery vehicle are dramatically reduced. The tactical triad, however, has been decimated with the retirement of the W79 (in 1992), W84 (in 1990), W85 (in 1991), and W80-0 warheads and their delivery systems. This has seriously eroded the nuclear prism to the point that the only system dedicated to nuclear assurance of our allies is the B61 gravity bomb, which is forward deployed in Europe.

It should come as no surprise that our allies—and more importantly our adversaries—are questioning the credibility of our commitment to extended deterrence in Europe and Asia. Those questions have given rise to a debate among our allies concerning whether they should pursue independent nuclear-weapons programs.

While the United States has allowed its nuclear prism to erode, our enemies have continued to develop and deploy a wide range of new types of strategic and tactical nuclear weapons. For example, “experts believe Russia still has between 1,000 and 6,000 warheads for nonstrategic nuclear weapons in its arsenal” that vary in yield and delivery system. Should Russia seek to escalate to nuclear use in Europe, it is President Putin who has the upper hand because of the sheer number of options he can choose from.

If the United States desires to remain a credible ally and effectively deter our adversaries, it may be time to reconsider our view on tactical nuclear weapons and the prism they once created.

Adam Lowther is director of the School of Advanced Nuclear Deterrence Studies at Kirtland Air Force Base. Larry Schoof is the director of the Weapons Intern Program at Sandia National Laboratories.