Why America Must Improve Its Missile Defense Systems 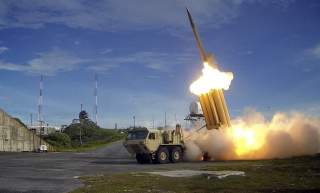 President Trump’s recent claim that U.S. ballistic-missile defenses are effective “97 percent of the time” has provoked much discussion about the capabilities of one U.S. defense system in particular: Ground-Based Midcourse Defense. That system provides the U.S. homeland with protection against a limited number of first-generation intercontinental-ballistic missiles, like the kind we might expect from North Korea in the near term.

The president’s comments were perhaps poorly articulated, but the ensuing reaction to them has also included some questionable assumptions about how to assess the reliability of the Ground-Based Midcourse Defense. More troublesome is that it has distracted from the dialogue the country really needs right now, which is how to best improve homeland missile defenses in light of the North Korean threat.

Much of the talk about Ground-Based Midcourse Defense since Trump’s comments has focused on the probability that the interceptor portion of the system, the Ground-Based Interceptors (GBIs), will work when needed. When trying to predict this, it is tempting to look at the GBI intercept test record and extrapolate. The basic logic follows thusly:

The GBIs have a 56 percent success rate in tests (ten hits out of eighteen attempts since 1998). Ergo, the chance of a GBI working is 56 percent.

This might be true if the Missile Defense Agency simply shrugged its shoulders and declared “better luck next time” after a failed intercept test. It does not. It spends months rigorously reviewing the test data, identifying the cause of any malfunctions and taking corrective action to make sure the problem does not reoccur. As a result, failed tests have over time yielded a better system, not a worse one.

This logic also ignores that of the eight test failures since 1998, only one has occurred with a configuration of GBI that is currently deployed. Five of the eight failures occurred during testing prior to 2006. These tests involved early prototype kill vehicles mounted ad hoc atop old Minuteman II ICBM boosters, which were not designed for the ballistic-missile defense mission. One would anticipate problems to arise during this initial phase. The remaining two test failures took place in 2010 and used a newer CE-II kill vehicle model, which has since undergone a major reconfiguration to correct the cause of the failure. This corrected variant of the CE-II successfully destroyed a long-range ballistic-missile target in 2014.

In short, the GBI fleet may be more reliable than a cursory look at the testing record might suggest.

Some have furthermore expressed concern that presidential confidence in Ground-Based Midcourse Defense could be dangerous, under the logic that “if we feel too safe, we are more likely to start a war.”

It is first worth noting that President Trump’s comments were not substantively different than the confidence in Ground-Based Midcourse Defense publicly expressed in the past by numerous top defense officials from the last three administrations. These include Defense Secretaries James Mattis, Ash Carter, Leon Panetta and Robert Gates, to name a few. President Obama, likewise, had enough confidence in the Ground-Based Midcourse Defense system to order the deployment of fourteen more GBIs in 2013 (a wise hedge in retrospect).

The ability to defend ourselves at home, furthermore, helps America keep faith with its promise to defend its South Korean and Japanese allies. These commitments are the bedrock of keeping North Korea deterred from starting a conflict. This is why improving homeland missile defense to keep pace with threats is so important. Yet without serious attention and investment in the near and longer terms, Ground-Based Midcourse Defense could easily become outmatched against the North Korean threat or a potential future threat like Iran.

One problem is capacity. Many have correctly pointed out that the United States would fire multiple interceptors to ensure the destruction of a single incoming missile. The number of GBIs that would be fired, a figure known as “shot doctrine,” is not readily knowable due to classification. We can assume, however, that it is probably more than two, and that it would vary depending on which model of GBIs are launched (i.e. the old ones or the new ones). Compounding this problem is imperfect discrimination of an incoming missile.

When a ballistic-missile launches and enters space, it begins to break apart. Boosters stages and other components break away from the main warhead, but continue travelling through space along with it. This creates a flying-junk pile, which must be “discriminated” by a network of sensors to identify which object is the warhead. Because this process is imperfect, it is possible the sensors might identify multiple objects in that junk pile as a potential warhead. Each of those objects would be engaged, rapidly depleting the limited fleet of forty-four GBIs.

To get at this problem, there are four parallel lines of effort that should be pursued.

The first is to improve the reliability of the kill vehicles across the fleet to reduce shot doctrine, and to make the fleet more uniform. There is an effort now underway to create a new Redesigned Kill Vehicle. The vehicle will incorporate the lessons learned from over twenty years of interceptor testing, maintenance and production to create a more reliable and more easily producible GBI. It is also likely to be a lot cheaper than the current models. The Redesigned Kill Vehicle is expected to replace most of the kill vehicles in the fleet by the mid-2020s, and it is vital that this work stays on track.

Secondly, we should increase the number of GBIs in the field. A recent reprogramming of 2017 defense dollars begins work on twenty more GBI silos at Fort Greely, Alaska, with funding for the GBIs themselves requested in an addendum to the FY2018 budget request. This would increase the number of GBIs at Fort Greely from forty to sixty—a positive step. Fort Greely is nonetheless laid out to hold one hundred interceptors. The administration and Congress should seriously consider starting the groundwork—such as missile field and silo construction—for this full capacity. This work takes time, but starting it now could prove a smart hedge should the United States need to quickly expand the GBI fleet again in the future.

Thirdly, the United States needs to improve its sensor system. Better sensors mean better discrimination, which means fewer GBIs wasted on things other than a real warhead. The Missile Defense Agency is currently constructing a new Long-Range Discriminating Radar in Alaska, and is on track to go online in 2020. This will greatly boost our ability to track and discriminate incoming missiles. But homeland missile defense has grown overly dependent on ground-based radars, which provide a single perspective of the “flying-junk pile.” High altitude or space-based sensors would provide a more complete picture of an incoming threat, helping to overcome the discrimination challenge.

Lastly, we should pursue defensive options other than Ground-Based Midcourse Defense. Directed energy technology mounted on practical airborne platforms, such as unmanned aerial vehicles, holds great promise for the eventual addition of a boost phase layer to the U.S. missile-defense system. The United States should also consider an underlay of shorter-range interceptors that could provide extra protection of major population centers and vital infrastructure. A space-based interceptor option—a key element of past missile-defense architectures—might also be explored with the establishment of space-based interceptor test bed to prove-out the viability of such an approach.

The U.S. homeland missile-defense system has improved markedly since its activation in 2004, and has become a fixture in the U.S. defense and deterrence posture. It protects hundreds of millions of people every day in an uncertain world. It is by no means perfect, but our criticism should be focused on making it better.

Ian Williams is an associate fellow in the CSIS International Security Program, and the associate director of the CSIS Missile Defense Project. He is the coauthor of the recent CSIS study, Missile Defense 2020: Next Steps for Defending the Homeland.