Why America Must Learn to Live with North Korea's Nukes 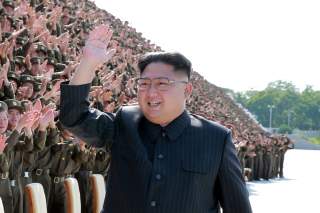 President Donald Trump and Chinese president Xi Jinping announced in a November 9 joint press conference at Beijing that “the U.S. and China both agreed not to replicate failed approaches of the past.” A week later, Xi sent Song Tao to North Korea on his behalf, but Kim Jong-un seemed to refuse to meet with the Chinese president’s special envoy. On the day Song returned to China, the United States redesignated North Korea as a state sponsor of terrorism. In response, North Korea tested its most advanced intercontinental ballistic missile. Such a development makes some people start to wonder: would the United States ultimately initiate a war against North Korea to remove its nuclear weapons? Or would China fully suspend its financial, energy and food support to North Korea to pressure North Korea to give up the weapons? In the end, would North Korea be denuclearized by either or both of the efforts of these two countries? The situation of the first North Korean nuclear crisis in 1993–1994 could provide some thought for the answer. Unfortunately, the answer to these questions is probably “no,” and the world may need to accept a nuclearized North Korea as it has been.

The key reason for why the North Korean nuclear-weapons issue has lasted so long is that there are three forces simultaneously cementing the current situation since 1993. The first one is North Korea’s firm belief that the possession of nuclear weapons is the key to its regime’s survival. Since North Korea revealed its interest in nuclear weapons in the very beginning of the nuclear-weapon program crisis in 1993, experts tended to agree that North Korea’s true intention was to use the nuclear program as a leverage to bargain for more economic assistance and/or better diplomatic relationships with western countries, especially the United States. However, the developments over the following decade showed that North Korea’s true intention behind this pursuit was simply to possess weapons. Only by having such a weapon could North Korea deter a latent invasion from the United States. Therefore, given that North Korea did not abandon its pursuit of nuclear weapons despite facing hardship during the 1990s, there is no reason to believe that United States or China could pressure it into dismantling those weapons—especially after it has become a de facto nuclearized country.

Even if China agreed to guarantee the survival of the Kim regime, North Korea would never agree with this plan either. Scholars have suggested the possibility that China could guarantee the security of North Korea in exchange for North Korea’s disarmament. The problem with this idea is that North Korea has a deep-rooted distrust of China. Contrary to the usual impression that the relationship between these two socialist countries is sealed in blood, North Korea has never believed China is trustworthy. This distrust was the reason that the North Korean leadership refused to let the Chinese get involved in the Korean War from the very beginning, not even sharing the information about the war with the Chinese. During the war, Kim Il-sung also bitterly resented that the Chinese demonstrated great Chinese chauvinism from time to time. Disregarding North Korea’s opposition, China’s unilateral decision to build a diplomatic relationship with South Korea in 1992 further deepened the distrust. From North Korea’s viewpoint, China is not a reliable partner but a partner that typically betrays North Korea for the sake of its own interests. As the state-run news agency of North Korea criticized China in February this year, “This country (China), styling itself a big power, is dancing to the tune of the U.S.”

The second binding force on the current conundrum is the impossibility of the United States taking military action due to the cost and lack of accurate information. The United States undoubtedly has stronger and more advanced military power than that of North Korea, but a U.S. military attack on North Korea is improbable in reality. In 1994, President Bill Clinton reluctantly recalled plans of bombing North Korea’s Yongbyon nuclear reactor due to the potential casualties that could be caused by North Korea’s retaliation. Gen. Gary Luck, who was the commander of U.S. forces in Korea at the time, estimated that there would be 300,000 to 750,000 casualties—and that estimate did not include civilian casualties and economic lost. The South Korean president Kim Young-sam also personally called Clinton several times to dissuade him from initiating this second Korean War based on the scale of likely casualties. Today, with nuclear weapons and more advanced missiles, an attack from North Korea would unquestionably incur greater casualties to the United States, South Korea and Japan. Like 1993–1994, the main objection to U.S. military attack on North Korea unsurprisingly comes from South Korea as the South Korean president Moon Jae-in made it very clear that “I say this with confidence: There will be no war on the Korean Peninsula ever again.”

It is also impossible for the United States to take out all of North Korea’s nuclear weapons with quick, surprising and surgical military action. Those nuclear warheads and missiles are stored in caves or underground, which are deep and strong enough to protect them from a U.S. bank-buster. No country has sufficient intelligence about the specific locations of them. North Korea certainly keeps changing the storing places of those weapons from time to time. Air Force Chief of Staff Gen. Merrill McPeak said in 1994, “We can’t find unclear weapons now except by going on a house-to-house search.” Launching a surprise attack would, again, incite North Korean retaliation.

The third force maintaining the status quo is the deeply-rooted buffer thinking about North Korea in the minds of the Chinese leadership. China has regarded North Korea as a geopolitical buffer state keeping U.S. forces far away from its borders since the Korean War. Some Chinese scholars such as Jia Qingguo, a professor of Peking University, argued that the “buffer is outdated” from the point of view of the utility of a buffer during in modern warfare. However, the utility of a buffer is not only its military function during wartime. It also acts as an extra layer for national defense during time of peace, providing China with a strong sense of security psychologically. More importantly, the buffer thinking is a product of geography. After all, North Korea is just five hundred kilometers away from Beijing and it has been repeatedly used by foreign countries, such as the United States and Japan, as a military route to invade China. Thus, as long as Chinese leaders continue to view the United States as a latent geopolitical rival in Asia, then this self-defensive thinking will never cease to influence how the country’s decisions and actions. As a result, any pressure China puts on North Korea will always be carefully calculated and measured for not making this buffer disappear.

Since none of the forces cementing the current conundrum since 1993 disappeared, and indeed even consolidated, on what basis could we assume the issue will be solved this time. Therefore, the questions that should be asked are: Is it really a bad thing to recognize North Korea as a nuclear power, which it already is? North Korea has possessed nuclear weapons as early as 2006, but did that really disadvantage Northeast Asia in the past ten years? If the key concern of recognizing the status of North Korea is a nuclear strike from North Korea in the future, then why not ask it to support none-first-use policy? If the key concern is about the nuclear proliferation, then how do we prevent the anti-proliferation regime from getting worse? The point is that recognizing North Korea as a nuclear power is not the end of the world, but forcing North Korea to disarm might lead to the end the world.

Yu-Hua Chen is a PhD Research Scholar at the Australian National University.