Why America Must Stop Russia from Violating the INF Treaty 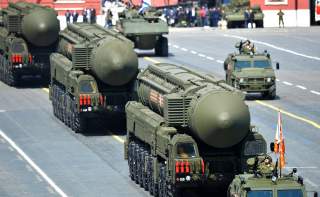 The thirty-year-old treaty banning U.S. and Russian ground-launched intermediate-range missiles is at risk of collapse. Russia has violated the treaty by testing and deploying a ground-launched cruise missile of intermediate range. The Obama administration sought to bring Russia back into compliance, but its efforts failed.

Preserving the treaty remains in the interest of the United States and U.S. allies in Europe and Asia, but it will be an uphill fight. If the Trump administration wishes to get Russia back into compliance—at this point it’s an “if” question—then the administration will need leverage. That leverage would ideally persuade Moscow that the military and political costs of continuing to violate the treaty outweigh whatever gains the Russian military hopes to achieve.

In 2007, senior Russian officials began to express concern about the treaty, noting that third countries were beginning to acquire intermediate-range missiles in significant numbers. Those countries included China, North Korea, India, Pakistan, Iran and Israel. They had one thing in common: all were closer to Russia than to the United States.

Given the large number of Russian strategic forces and other nuclear weapons, it was unclear why Moscow would need intermediate-range missiles to counter third-country forces. If the Russian leadership had genuine security concerns, however, it had a path forward: withdraw from the treaty as permitted by its provisions.

The Kremlin chose to cheat. It ignored the Obama administration efforts to try to get Russia back into compliance with the treaty and instead made charges of U.S. treaty violations (one of which may have some merit, but that is a different story).

Some in Washington have suggested that the United States simply withdraw from the treaty. That does not appear the wisest course of action. Due to concern about sources and methods, the U.S. government has made little information public about the Russian violation. Washington might end up getting the blame for killing the treaty—and its withdrawal would leave Russia free to deploy intermediate-range missiles without restriction, when the U.S. military has no plans for intermediate-range missiles of its own.

The treaty’s demise would mean that U.S. allies and other countries in Europe and Asia would find themselves under threat from an unlimited number of Russian intermediate-range ground-launched cruise missiles. Absent the treaty, Moscow might choose to supplement those by building new intermediate-range ballistic missiles.

The end of the treaty—or Russia’s continuing violation—would have other effects. It would virtually ensure that no new U.S.-Russia arms control treaty could secure the Senate votes needed for consent to ratification.

If the treaty is going to collapse, Washington should manage things so that it will be clear to all that Russia is responsible. However, it would make better sense to attempt one more stab at getting Moscow back into compliance. That will require leverage.

Some people—including Senate Republicans—have proposed that the United States develop its own intermediate-range missile as a counter to the Russian ground-launched cruise missile. To be sure, the prospect of a Pershing III ballistic missile or new ground-launched cruise missile in Europe would give the Kremlin pause and remind the Russians how much they did not like American intermediate-range missiles in Europe in the 1980s.

Before proceeding down this path, however, the administration and Congress should consider two questions. First, could the Pentagon budget, already stretched to meet many competing demands, afford a multibillion-dollar program to build new intermediate-range missiles?

Second, if the missiles could be built, would NATO agree to deploy them? While NATO deployed such missiles in 1983, doing so almost broke the alliance. There is no reason to believe that deploying missiles today would prove any less controversial. If they could not be deployed in Europe (or Asia), U.S. intermediate-range missiles would be based at Fort Sill, Oklahoma, where they would not bother Moscow much.

A second option would be to position in the European area conventionally armed weapons systems that are not prohibited by the INF Treaty. For example, the U.S. Air Force could deploy conventional B-52 or B-1 bombers periodically to Royal Air Force Fairford, a forward airbase in Britain, and stockpile Joint Air-to-Surface Standoff Missiles there for potential use by the aircraft. Moscow would not like that.

These measures would not contravene the INF Treaty. They would be far cheaper than building new ground-launched intermediate-range missiles. They would prove much more acceptable politically in Europe. Moreover, the United States could readily reverse those steps if Russia ceased its treaty violation.

Washington should also consider diplomatic measures. The Russian violation is a treaty issue between the Washington and Moscow, but Russian intermediate-range ground-launched cruise missiles cannot reach the United States. (Alaska might be at some risk, but only if the Russian military deployed missiles where it has not in the past.) The direct threat is to the countries of Europe and Asia.

The U.S. government should engage its allies in NATO and in the Far East, friends such as Sweden and Finland, and other countries such as China, inform them about the details of the Russian violation, and stress that they are potential targets of the new Russian missile. The goal should be to “multilateralize” the problem, that is, to increase political and diplomatic pressure on Moscow from third countries who presumably would not want to see this new threat to their security.

Would this have a major impact on the Kremlin’s calculation? Perhaps. German chancellor Angela Merkel plans to visit Moscow in early May. Washington should ask that she place the INF Treaty violation high on her agenda with Russian president Vladimir Putin.

Having countries other than just the United States complain to Russia about the violation—preferably directly to Mr. Putin—could increase the prospects that Moscow might reconsider its actions.

The United States needs leverage to persuade the Kremlin to come back into compliance with the INF Treaty. Increasing U.S. conventionally armed sea- and air-based weapons in Europe would be a countervailing measure that would offset the military advantages that Russia hopes to secure by its violation. Getting third countries to beat up on Moscow would raise the political and diplomatic costs.

Hopefully, such steps would lead the Kremlin to recalculate the pros and cons of adhering to the treaty and end its violation of it. Success will depend on the United States and its allies creating leverage. Admittedly, it is a long shot, but it is worth a try.

Image: Military parade to mark the 70th anniversary of Victory in the Great Patriotic War of 1941–1945. Kremlin.ru