Why Is America Restarting the Cold War With Russia? 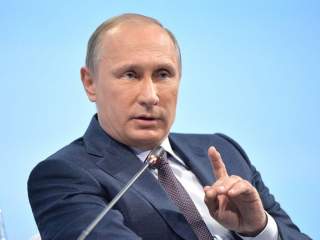 The president’s new budget proposal for 2017 calls for a 200 percent increase for our military spending in Europe aimed at Russia—perhaps the most provocative step yet in our apparent efforts to encircle and antagonize that country.

Meanwhile, spending aimed at ISIS is to increase by 50 percent.

This is belligerent nonsense.

Radical Islam has declared war on the United States, beheaded our citizens, planned and carried out the attacks on the World Trade Center and the Pentagon, killed our soldiers and Marines in Iraq and Afghanistan, and declared its intention to set up a caliphate that would stretch from the Mediterranean to the Caspian.

Drawing in Pakistan and the Caucasus, and expanding from there into Central Asia and beyond, the caliphate would claim a population roughly the size of the United States. It would possess nuclear weapons, which the Islamists have no qualms against using to destroy the modern world.

On the other hand, Russia’s activities in Ukraine and Syria, as Moscow sees it, represent a defensive effort to protect legitimate national interests. In the Kremlin’s view, Crimea is Russian and has no bearing whatsoever on U.S. security. Syria is as close to the Russian border as New York is to Chicago, and Russia will not countenance a jihadist regime in Damascus. It is only too mindful that fifteen thousand of the Islamic fighters in Syria are Chechens, who, once done there, will return to Russia for the next round of terrorist brutality.

As for Ukraine, had the United States encouraged that country’s electoral calendar to play out rather than accept the overthrow of the legitimately elected president, Viktor Yanukovych likely would have lost the February 2015 election. There is little doubt Crimea would now be a part of the Ukrainian Republic. If Ukraine is now a shambles, we must consider the role the West played in this strategic fiasco.

Likewise, we should have negotiated over the future of Syria without making it conditional on Assad’s departure (Moscow refused to participate in the charade of a “negotiation” with an already determined outcome). Syria in all likelihood might have averted the mayhem and chaos now engulfing a large part of that country. Russia would not be engaged militarily there, and Europe would not now be drowning in a flood of refugees who will not assimilate but are ready to assassinate.

Since the fall of Communism, Russia has concentrated on internal matters—yes, sometimes in a manner contrary to our values. Its leaders and policies have been seriously flawed. If Russia is expanding its military capabilities, this is a trend we must attend to, but that does not reactivate its status as our enemy.

It remains the case that NATO countries hugely outspend Moscow when it comes to military procurement. There is no evidence whatsoever that Russia, as when it was the Soviet Union, is embarked on a wanton course of global expansion. This is a country that unilaterally pulled its occupying troops out of Eastern Europe, a door closing on the Cold War.

Obviously, some highly influential people can’t accept that and leave the Cold War behind, their mindsets and careers linked to a lingering enmity between the Kremlin and the White House. In particular, they can be found as think tank strategists and arms merchants.

President Eisenhower, a career military man and one of our greatest heroes, did not shrink from warning his countrymen about the dangers of a rampant military-industrial complex. At the same time, such Cold War leaders who followed Ike understood that weakness is provocative and took steps to have sufficient military readiness to deter and defeat those who would do us harm.

President Nixon, at the Cold War’s height, saw the value in settling differences with Red China so as to offset the USSR. President Reagan saw no problem in sharing ABM technology with the Soviet Union, negotiating the removal of intermediate range nuclear weapons from the heart of Europe. He declared an end to the Cold War and strolled through Red Square arm-in-arm with President Gorbachev.

Today, we have the complete opposite approach: a waning military capacity coupled with petulant policies towards Russia, a country that could be an ally against such mutual enemies as radical Islam and, potentially, an expanding China.

It represents a stunning and total failure of vision, moral and strategic. We must cast aside such absurd, costly, unachievable and un-American ambitions that would have us policing and garrisoning the planet, intervening in every conflict. We must favor a policy that cultivates mutually beneficial relations with nations of like culture and values, negotiating smartly in the national interest—all, of course, while maintaining a defensive military posture second to none. America was conceived as a strong and healthy Republic, not a vitality-draining empire.

Later this week, after centuries of conflict, the heads of the Roman Catholic and Russian Orthodox churches will take a powerfully significant step. They will not allow a history of mutual estrangement over theology and ecclesiology to prevent the forging of new bonds of friendship and cooperation, bridging a once unbridgeable gap.

The impetus for this rapprochement might be found in the words of Pope Francis, spoken in 2015 in Sarajevo. Alluding to mounting East-West tensions over Ukraine and the Middle East, he warned that “a kind of Third World War is being fought piecemeal. . . . [A]n atmosphere of war” hangs over the planet.

The historic encounter between these two giants of the Christian faith must be seen, in part, as an effort (however modest, initially) to avert impending disaster. I applauded the role of Pope John Paul II to help end the Cold War. It is my hope that Pope Francis and Patriarch Kirill can begin the healing process between Moscow and the West and begin a new era of cooperation. We must not continue an “atmosphere of war” now hanging over the planet.