Why America Should Beware a Resurgent China 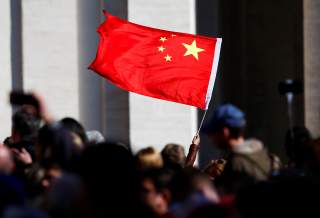 As it makes its presence felt in every corner of the world and posits an alternative to the Western liberal-democratic order that has underpinned international relations since the end of World War II, China is beginning to experience some of the blowback that other global leaders before it have been met with. And judging from the indignant reactions in some Beijing circles, that backlash was not entirely expected.

With doubts over the future of U.S. global leadership rising and democracies worldwide arguably entering a period of fatigue, we are witnessing a new, more assertive phase in China’s foreign engagement under President Xi Jinping. China has seen an opportunity to displace an old international system that, in its view, is both unfair and which has outlived its usefulness, and it is now flexing its muscles to make this a reality.

The omnipresence of China in our lives, and its no-longer-hidden efforts to discredit the old system and the values that underpin it, has not been without controversy. Little by little, the ramifications of expanded trade and closer engagement with China for our liberal-democratic institutions are starting to be recognized. Recent high-profile scandals surrounding China’s undue influence on elected politicians in countries from the Czech Republic to New Zealand, the bribing of top UN officials by Chinese involved in political warfare operations against the West, or the growing censorship that threatens academic and journalistic freedom as we collectively embrace China, are causing a backlash, which is forcing people to rethink the price we are willing to pay in return for collaboration with the Asian giant.

It comes as little surprise, then, that as the world learns more about China, which no longer can be ignored as a far-away and exotic land and people, apprehensions surrounding its role in our everyday lives would increase. Such cautiousness is natural whenever the actions of a foreign power threaten to affect how we conduct our affairs, let alone risk undermining the mores and institutions that define us. Much of the resistance to U.S. leadership since the end of World War II, and perhaps even more so in the brief unipolar moment that followed the end of the Cold War, stemmed from that ingrained will to resist imposition from the outside.

As it installs itself as a global power that seeks to rewrite the rules of the game, it is only natural that hegemonic China would face similar skepticism abroad. However, what makes China a special case is the fact that its political system and outlook are in many ways incompatible with the prevailing world order since the 1940s—a U.S.-led free-market liberal order based on respect (often observed in the breach, admittedly) for the rights of the individual and the values reflected in institutions like the UN. China is not just any other new major player on the international scene: it is a party state, led by the most successful, and certainly the most resilient, Marxist-Leninist party to have walked the earth. Furthermore, its ascendance within the international system coincides with deepening authoritarianism in China accompanied by unprecedented paranoia with the Chinese Communist Party (CCP). As China expands its influence, it is also exporting bits of that paranoia aboard, which often has come across as ham-fisted—threatening, browbeating, lecturing whomever dares criticize it or gives an audience to its sworn enemies, from Tibetans to Taiwanese, Uighurs to pro-localization Hong Kongers, Falun Gong practitioners to human-rights advocates.

Given the potential impact of China in our lives, in the news we consume and the information we can access on the Internet, it was only a matter of time before ignorance began to be replaced by curiosity, which in turn translated into public demands on our elected officials to tread carefully when they negotiate with Beijing. In the past year alone, a series of reports, including Four Corners’ “Power and Influence” investigation in Australia, “Magic Weapons” in New Zealand and the National Endowment for Democracy’s just-released “Sharp Power,” have helped raise awareness about the aims, means and actors involved in China’s assault on our democratic institutions. For example, Canada is one of many countries that are now taking a more cautious approach to China, as Prime Minister Justin Trudeau’s just-concluded visit to Beijing made clear. Additionally, Australia is in the process of adopting measures to mitigate the impact of foreign (and largely Chinese) influence in government affairs. Also, states like Pakistan and Nepal have decided to renege on major infrastructure projects involving Chinese funding due to concerns over the negative impact on their sovereignty.

Beijing’s reaction to the recent blowback has been the result of both hubris and the fact that it is new to being a global power and has yet to find its footing. Just as the world needs to learn more about China, so does China need to learn more about the world, especially given the incompatibility of its system with many of the countries it seeks to interact with and influence. It is no doubt trying to learn, which is made clear by the impressive, bilingual volumes prepared for its One Belt, One Road (OBOR) initiative detailing the legal systems of all the countries targeted by the neo-colonial exercise. But if it is to be successful as an international player, then it will have to learn to tone down the indignation and name-calling—“biased,” “China hater,” “anti-China hysteria,” “disgusting,” “sour grapes,” “gossip fiends” and “barbarians,” are just a few recent examples of language used when things don’t go China’s way. It should also learn to respect our long and cherished Western traditions of journalism rather than accuse our media of being “narcissistic,” telling our reporters to “shut up,” or suing journalists for exposing the united front activities of Chinese entities active in the West.

Beijing will also have to recognize that there is a difference between criticizing the CCP over its human-rights record and refusal to “promote friendly exchanges between different cultures,” as the Global Times, a CCP mouthpiece, recently wrote in an editorial bemoaning the lack of progress on trade negotiations with China. Authoritarianism and flagrant violations of human rights, however, should not be confused with “culture.” Critics of China, or those of us who counsel a more cautious approach to our countries signing major trade deals with it, have no problems with China’s culture, which indeed is extraordinarily fascinating and multifaceted. The disconnect isn’t cultural (if it were, then why would trade deals—any deals, for that matter—between Taiwan and China always be so controversial?); it is political. It lies in the chasm that exists between the liberal-democratic world order and authoritarian revisionism. What we warn against are the often corrosive effects on our own cherished values of closer ties with authoritarian China, and China’s ability to exert pressure by exploiting the “gray zones” of our open democratic systems, in the co-optation of our officials, to further its interests, sometimes against our own. What we take exception to are attempts by the CCP to position Xi Jinping, who has orchestrated a crackdown on Chinese civil society on a scale unseen since Mao Zedong, as a “peacemaker.”

Indeed, calling for the defense of democracy and the protection of human rights is “biased”—a word that Beijing has used (and misused) time and time again; but by no means does this signify that one is “anti China,” let alone “hysterical.”

The new paradigm that is being created by China’s ascendance forces democracies worldwide to find a balance between engagement with the world’s second-largest economy and protecting the values and institutions that define them. Saying “no” to certain deals or adopting a more cautious position on trade negotiations isn’t “China bashing,” nor is it the result of a refusal to have exchanges with another culture; it simply demarcates the line beyond which a country will not go, and reaffirms its commitment to negotiations being an exchange, a give-and-take, between two parties. In other words, the United States would give some, but China should give some as well, or else there is no deal. Saying no is entirely survivable.

Such steadfastness would come more easily if we understood that China’s engagement with the world has nothing to do with charity: China wants trade deals and partnerships because it is in its interest to do so. In other words, to use something that ought to be a cliché, China needs us as much as we need it. With that knowledge, we can afford to take our time to make sure we get the relationship on the right track and in a way that does not unduly compromise our values.

It would be foolish to deny that China is now a major and rightful player on the international scene. It would be equally dangerous to assume, as it seeks to rewrite the rules of the game, that we are dealing with an ordinary country. China is a successful authoritarian party-state the likes of which the world has never seen before. As democracies worldwide try to figure out how to approach it, their leaders could learn a few things by reaching out to countries on China’s “periphery”—countries like Taiwan and Singapore, or territories like Hong Kong, for example—that already have substantial experience balancing the many opportunities offered by China against the threats (existential, in Taiwan’s case) it poses to their way of life.