This Is Why America Should Fear China's Air Force 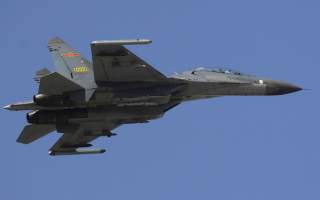 Want to know just how far Chinese airpower has advanced over the past 20 years? The U.S. might need 15 times as many aircraft to defend Taiwan as it did in 1996.

That's the estimate of a RAND Corporation analysis of trends in China's air capabilities. Researchers examined two scenarios: A Chinese invasion of Taiwan and a Sino-American clash over the Spratly Islands, in four specific years—1996, 2003, 2010 and 2017. Using mathematical air warfare models, they calculated how many U.S. air wings—each of 72 aircraft—would be needed to achieve 24/7 air dominance over Taiwan and the Spratlys in the face of a massive surge of Chinese aircraft. They also looked at attritional scenarios to estimate how many U.S. air wings would be needed to destroy 50 percent of Chinese aircraft over those targets within 7 days and 21 days, which presumably would force China to call off its invasion.

The results were staggering. In 1996, China would have been a pushover, with just 2.1 U.S. air wings needed for air dominance over Taiwan. By 2003, that number would have soared to 10.6 wings, and 19.6 wings by 2010. By 2017, the U.S. would need 29.9 air wings—the equivalent of 2,000 aircraft. In other words, more aircraft than America could have the faintest hope of realistically deploying to defend Taiwan.

Simply attriting Chinese aircraft, though not necessarily stopping them from hitting their targets, would be easier but still formidable. From just 0.8 air wings to destroy 50 percent of Chinese airpower attacking Taiwan in 1996, the U.S. will need 7 air wings in 2017, a nine-fold increase.

The Spratly Islands would be easier to defend because they are more distant from China. The U.S. would need just 10.1 wings to maintain air superiority over the islands, though this still dwarfs the 0.5 wings that would have been sufficient in 1996.

"Historically, PLA [People's Liberation Army] air forces have not posed much threat to neighboring countries," the study noted. "In the two decades, however, China has rapidly modernized its airpower. Whereas in 1996 China had just taken delivery of its first batch of 24 fourth-generation fighters, it now operates more than 700. The United States, in the meantime, has added fifth-generation fighters to its inventory, and its fleet remains both more advanced and larger than China’s."

RAND researcher Eric Heginbotham emphasizes that these numbers should not be taken literally. The study was not based on a comprehensive air warfare analysis, and the data was all open-source. It was meant to illustrate trends and explore the effects of changes in American and Chinese airpower. "Both sides have improved capabilities," Heginbotham told The National Interest. "What has a bigger impact: the introduction of 200 or 300 5th generation aircraft, or the replacement of 800 2nd generation fighters with 4th generation ones?"

The study does support what everyone knows already, which is that the U.S. cannot achieve air superiority over Taiwan in the way that it could have without breaking a sweat in the 1950s or 1980s.  If there is a bright spot for Washington, it's the Spratlys. While air dominance would be extremely difficult, attriting Chinese airpower over the islands would be feasible.

What should U.S. policy-makers take away from the RAND study? "China has made very rapid gains in relative military capabilities," Heginbotham says. "It can challenge U.S. air and naval dominance at the outset of a conflict at increasing distances from the mainland—and inflict significant losses on U.S. forces in the process. It would probably take some for the United States to gain air superiority in a conflict over Taiwan, though gaining air superiority over the Spratly area would be significantly easier."