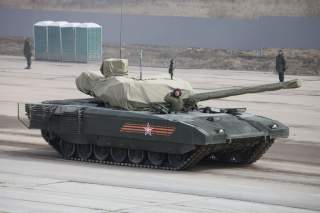 There have been two general reactions in the West to the first public glimpses of the T-14 Armata tank, the first completely post-Soviet Russian design for a main battle tank. The first is to view its claims—of greater speed, maneuverability, firepower and survivability vis-à-vis anything being produced for Western armies—as being Potemkin in nature. In other words, the new model that will be appearing in the May 9 Victory Parade is good for show and propaganda, but won't actually be able to deliver in the field. The second is a high degree of incredulity that a country already under Western sanctions and whose economy has entered into a recession would devote an ever-shrinking pool of state resources to building a next-generation battle tank. Indeed, if Vladimir Putin continues to adhere to a military buildup plan that was developed under far different economic conditions, does he risk repeating one of the fundamental mistakes that led to the failure of the Soviet Union—having defense spending eat up more and more of the country's gross domestic product?

Yet there is another, compelling reason for investing in the research and design capacities of the Russian military-industrial complex—and highlighting the results: Moscow's bid for securing its position as the supplier of choice for a variety of countries around the world looking to bolster their defense capabilities—even when such plans may draw Washington's disapproval—becoming the world's "arsenal of autocracy", so to speak (although a number of Russia's best customers are in fact democratic states).

A number of rising powers—and a whole slew of established middle powers—may be perfectly happy for Moscow to assume this role. The post-Soviet Russian complex is largely a sunk cost—paid for by decades of Soviet spending. A whole network of design bureaus, factories, industrial plant and testing grounds already exist. Even for countries like China and India, it is still economically rational to continue to turn to Russian firms rather than attempt whole-scale greenfield construction from scratch of key defense industries—thus allowing them to leapfrog earlier stages of development and to avoid devoting too many of their own resources to duplicating the Russian military-industrial complex at one blow. (Over time—through technology transfer, leasing or even outright reverse engineering—the rising powers can slowly duplicate for themselves more of an indigenous defense industry.)

For post-Soviet Russia, it makes sense to revitalize defense industries. Several years ago, Vladimir Putin was already ranking arms exports alongside oil, natural gas and atomic power as one of Russia's comparative advantages in international markets. The initial hope, in the 1990s, that the massive Soviet defense complex could be retooled to produce vacuum cleaners and VCRs failed, in part because Russia (as well as other inheritors of the Soviet military industrial complex like Ukraine) could not compete in labor costs nor could they guarantee the same level of quality as the export-oriented factories of the Asian tigers. Part of the strategy for reindustrializing Russia, therefore, is to rejuvenate the defense industry and take advantage of growing demand—in a more unipolar, G-zero world—for sophistical armament systems.

And Russian-produced equipment has the virtue of being "good enough." Most countries in the world—particularly those with disputes with Washington—are well aware that no country (with the exception perhaps of China) could expect to hold off a United States determined to prevail in a conventional conflict. However, they are also aware that, since the end of the Cold War, there is no existential threat facing the United States that would generate the public willingness in America to accept casualties and a high degree of sacrifice. The United States continues to look for low-cost, no-casualty options when it contemplates intervention—and usually wants not simply superiority, but complete dominance, across all spectrums of conflict in a given theater. So for states that seek to restrain or deter the United States, their militaries must not guarantee that they can defeat the Americans, but that they can deny access and make the costs of operating prohibitively high in terms of possible casualties or losses of equipment.

There is always the risk, of course, that the Russian arms industry will fulfill Vladimir Lenin's famous dictum that capitalists will sell the rope with which they will be hung—by selling weapons to countries that may end up using them in a conflict with Russia (starting, of course, with China). But the strategic calculation, in the short term, is that most countries are seeking ways to limit and constrain American freedom of action. Having more states around the world in possession of equipment—particularly systems that Washington does not want sold—as a way to create difficulties for the United States is seen as worth the longer-term danger.

When the T-14 rolls across the Red Square for Victory Day, then, there will be several intended audiences. For domestic Russian consumption, the message will be that Russia again possesses equipment that can match the best of what resides in Western arsenals—and that Russians need to be prepared for some additional sacrifices in the coming years to provide their military with better hardware. But it also signals to a variety of clients around the world that Russia's defense complex can produce comparable equipment. If Russia can find enough buyers, it can help to pay for its own military buildup and provide the seed corn from which Russian designers can develop the next generation of weapons systems. It is the best advertisement that Russia can keep producing next-generation systems—and the hope is that customers will follow.

Nikolas Gvosdev, a professor of national security studies and a contributing editor at The National Interest, is co-author of  Russian Foreign Policy: Vectors, Sectors and Interests (CQ Press, 2013). The views expressed here are his own.