Recognizing the Limitations of American Influence in Iran 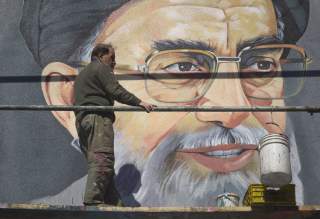 It is unsurprising that we once again observed brave portions of Iran’s citizenry taking to streets and squares across the country to demand accountability and change given that they have spent every day of their lives under the heavy weight of repression, corruption, economic inequality and decades of unaddressed grievances. It’s also unsurprising that the protests were followed by a wave of strong opinions from U.S. politicians and pundits about what the United States should do about them. Vice President Pence asserted in a Washington Post op-ed that “the last administration’s refusal to act ultimately emboldened Iran’s tyrannical rulers to crack down on the dissent.” According to this view, it seems the explanation for the crackdown on the 2009 “Green Movement” protests in Iran can be found in Washington’s actions (or, more precisely, alleged inactions) and, by extension, the fate of this latest round of protests rests with the U.S. government. While U.S. statements and actions and, importantly, the context in which they take place can and do play an important role, many pundits are falsely assuming that the outcome of the protests is centrally dependent on the United States.

Similar false assumptions were made to explain the result of the 2011 protests that ended Hosni Mubarak’s thirty-year reign in Egypt—and by some of the same people. In this case, however, the Obama administration was criticized for the opposite “crime”: failing to stand behind an authoritarian regime beset by popular protests. According to this line of argument, Mubarak’s pro-American regime could have survived the January uprising with U.S. support, thereby averting the chaos of the last several years and the ensuing degradation in U.S.-Egyptian relations. If only President Obama had stood behind Cairo during its time of need, then the United States would still have a reliable partner at the head of the Arab world’s largest country. As with Iran, the United States held in its power the ability to make or unmake a foreign government.

It is time for a reality check: despite claims to the contrary by Iran’s supreme leader, the United States is not the central actor in the drama that recently unfolded in Iran, nor was it the central actor in Egypt back in 2011. The mass protests that forced the Egyptian dictator from power were driven by the Egyptian public’s growing disenchantment with decades of political, economic and social mismanagement by a succession of military rulers. Contemporary observers noted with surprise the absence of references to the United States or other foreign-policy considerations during the protests. The demonstrators’ recurrent chant—“bread, freedom, social justice and human dignity”—encapsulated the domestic motivations behind the public’s mobilization.

Inspired by events in Tunisia, they turned out in the thousands to reject an economic order in which well-connected elites profited handsomely from corrupt business deals, while 40 percent of Egyptians were living on less than $2 per day.

Young Egyptians, who played a central role in the protests, expressed frustration with their lack of economic opportunity, reflected in a youth unemployment rate around 25 percent. They stood up to a capricious and brutal security apparatus, whose high-profile human-rights abuses undermined the physical security and dignity of Egyptians throughout the country. And the protesters resisted a perceived plan by Mubarak to pass the presidency to his son, Gamal. These Egyptians were not responding to, and did not wait, on a signal from the United States; they were trying to take their destiny into their own hands.

Critics of President Obama’s Egypt policy at the time—including his secretary of defense—nevertheless argue that the United States could have kept Mubarak in power. There are two variants to this argument, which focus on the reactions of powerful groups in Egypt to the protests. If President Obama had publicly declared his support for Mubarak, either the Egyptian military would have stayed loyal to Mubarak and presumably felt empowered to violently disperse the protests or the Muslim Brotherhood—the best organized opposition group in Egypt—would have continued to sit out the demonstrations, depriving the protests of the last push across the finish line. Neither of these theories holds up under examination. It was not until February 1, 2011, that President Obama privately urged and publicly intimated that Mubarak should step down, and by this time the Muslim Brotherhood had already announced it would join the protests and the military indicated it would not employ force against the demonstrators. In other words, the die had been cast before the United States definitively weighed in. The success of the demonstrations was an Egyptian story, not an American one.

If the U.S. role was not decisive in Egypt, a government over which the United States had tremendously more influence and leverage, then it’s not surprising that U.S. statements in support of Iran’s protestors did not prevent the abhorrent crackdown on them by Iran’s security apparatus in 2009. That is not to say the United States should have stood idly by nor did it. However, it’s difficult to imagine what the United States, or certain U.S. allies who held much more leverage over Iran, could have realistically done differently to fundamentally alter the course of events. Arguably the greatest challenge to its rule and legitimacy since its inception, the Islamic Republic and its security apparatus violently suppressed what many elites claimed was a foreign-orchestrated attempt to overthrow Iran’s government. To them, the perceived survival of the system of the Islamic Republic trumped all.

While the outcome of the recent protests in Iran is also not centrally dependent on the actions or words of United States, U.S. policies and rhetoric towards Iran can have an important impact—both positive and negative—on events on the ground. Just as it did in 2009, it is incumbent on the United States to maintain and voice its support for the exercise of internationally-recognized human rights, including freedom of speech and assembly.

Along these lines, the United States and allies can work to help ensure the free flow of information and access to social-media tools inside of Iran, as the United States did in 2009. It would also be prudent for U.S. policymakers to consider longer-term strategic policies that could have an impact on such developments over time. For example, it’s clear that the Obama administration’s issuance of U.S. Department of Treasury General Licenses related to the export of personal communication devices and services has helped increased the free flow of information over time as well as ability of ordinary Iranians to organize. Such decisions required strategic-policy planning and a willingness to take short-term political risks for longer term U.S. interests.

While the protests have lessened in recent weeks, the United States should continue to voice support for those peacefully protesting, condemn violence, and work to do so in concert with allies. Yet it must carefully calibrate such messaging so as to not needlessly strengthen the hand of those seeking to falsely discredit the protests as part of a U.S. plot. While Iranian officials will undoubtedly point a finger at the United States regardless of what Washington says, the ability of Iran’s leaders to highlight such tangibles as the tweets from the U.S. president may very well help strengthen such a narrative. It can also delegitimize the protesters in the eyes of even some ordinary Iranians who recall the history of U.S. interference in Iran, and leave the protestors more susceptible to a harsh crackdown from Iran’s security apparatus. Standing on the right side of history requires speaking up in support of the protestors, but it also necessitates nuance and an understanding of the complexities involved. The United States should not disregard the impact of its words and actions, for the better or worse, however big or small, on each and every young protester now unjustly languishing in an Iranian prison cell.

Moreover, the messenger and context matter. Remarks from President Trump and senior U.S. officials have not—and will not—be viewed by Iranian officials or ordinary Iranian citizens in isolation but rather in the broader context of the Trump administration’s current policies towards Tehran. This posture has included multiple allusions towards a goal of regime change, which include broadly labeling Iran a “terrorist nation,” antipathy towards economic relief from a nuclear deal widely welcomed by Iran’s population, indefinitely banning most Iranians from traveling to the United States, and a seeming reliance on threats and pressure.

As such, as ridiculous as it may seem, we should not underestimate the belief among those within Iran’s security apparatus that the United States helped to facilitate the recent unrest as part of its broader objectives. President Trump’s upcoming decision in May regarding whether or not to maintain U.S. sanctions relief as part of the Iran nuclear deal, also known as the Joint Comprehensive Plan of Action or JCPOA, will also impact calculations regarding U.S. intentions. A decision that signals Washington’s continued abhorrence of the deal will provide further fodder to those seeking to blame all of Iran’s economic woes on enduring U.S. hostility towards Iran.