Why Is America Still Defending Europe? 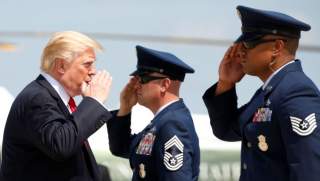 Donald Trump will go to the NATO summit in Europe next week with these simple questions on his mind: Why should America should spend over 3.1 percent of GDP on defense, while Germany spends just 1.2 percent and the EU as a whole only 1.5 percent? Why should Americans pay so much more to defend Europe than these countries are willing to spend to defend themselves?

We have now learned enough about the way Trump conducts foreign policy not to dismiss his ideas just because they do not fit the established patterns of U.S. policy. Reports that he told the G7 last month that NATO was “worse than NAFTA” and that his administration is weighing the options to withdraw U.S. forces from Europe need to be taken seriously. And that means we need to take seriously the questions that he is asking: Why should America pay to defend Europe?

Moreover the closer you look at this question the bigger it becomes. In fact it is far bigger than even Donald Trump seems to realize when he focuses on the gaps between American and European defense budgets. That is because when we consider the real cost to America of defending Europe, we have to look at much more than the size of U.S. defense budget and the price tag on America’s European-based forces. We must consider the costs of committing those forces to combat, and the costs of whatever war might then ensue.

And in Europe today, where the primary strategic challenge is the angry and ambitious Russia of Vladimir Putin, the costs of war could be very high indeed. They include not just the potential costs of a major continental conflict in which many of the advantages of location and terrain lie with Russia. They also quite credibly include the costs of a nuclear war in which America itself—including American cities—could become targets.

The cost of a major conventional war in Europe, for example over the Baltic States, would be immense—quite possibly dwarfing what’s been spent in the entire War on Terror since 9/11. The cost of a nuclear war is unimaginable. Next to these, the costs of keeping U.S. forces in Europe—great as they are—fade into insignificance. And of course these costs don’t go down much, if at all, even if the Europeans do start spending a lot more on their own defense.

That’s because the costs are inherent in America’s commitment to play the leading role in the defense of Europe, no matter how much others might contribute. America’s willingness to bear them is essential to the strategic logic of its European posture. It makes no sense at all for America to maintain forces in Europe—or forces in the United States to deploy to Europe—unless it is willing to pay the costs of sending them to war. Otherwise it is just buffing—and bluffing is at best a short-term expedient. It seldom works for long.

All this was perfectly well understood in the Cold War. U.S. policymakers and, as far as one could judge, U.S. voters and taxpayers, recognized and accepted that maintaining massive forces in Europe was just a down payment on the terrible price they would pay if war came. And their evident acceptance of that reality is what made America’s posture in Europe so credible. It deterred the Soviets and kept the peace.

But this understanding lapsed when the Cold War ended. In the “unipolar world” that followed it was easy to believe that America could lead the world without having to contemplate fighting major wars, or nuclear wars, against peer adversaries. The costs of such wars could therefore be ignored. That made it easy to take for granted that America should maintain its Cold War strategic commitments in Europe—and elsewhere—in the post Cold War world. Why not, when the costs were relatively low, and America’s wealth and power looked unchallengeable?

Now, however, things look different. As the new National Security Strategy at last makes clear, America does face formidable great power rivals in Europe and elsewhere, and its wealth and power are far less preponderant than they seemed. Donald Trump and his followers doubt that defending Europe is worth even the cost of maintaining the forces in Europe. How likely is it that they would believe it is worth fighting a war with Russia on the Europeans’ behalf?

Those who disagree with Trump, and who think America’s commitment to defend Europe should be maintained, therefore face a formidable task. They must explain why America’s interests in Europe’s security are so great as to justify America paying both the real year-on-year costs of building and maintaining forces for Europe’s defense, and the contingent costs of committing them to war with Russia.

Most of those who try to argue this case simply claim that America’s leading role in Europe and the alliances that support it are intrinsic goods which must be preserved for their own sake. But this kind of argument won’t work, because these are not intrinsic goods in their own right for America. They are, as they have always been, policy tools designed to serve more fundamental U.S. interests—especially interests in America’s own security.

America’s strategic commitment to Europe must therefore be justified—as it was in the Cold War—by arguing that America’s own security at home in the Western Hemisphere depends on protecting Europe from threats which the Europeans simply cannot deal with on their own no matter how much they spend.

This argument worked then because it was true then, as it was true in 1917–18 and in 1941–45. The question is whether it is true today? Does Russia pose the kind of threat to America itself that the Soviets posed in the Cold War, or that the Nazis posed in December 1941? And is Europe as incapable of resisting Russia today as it was of resisting Stalin in 1948 or Hitler in 1941?

Many people would argue that the answer to these questions is “no.” Europe is far stronger today, and Russia relatively far weaker, than in 1948 or for many years thereafter. Russia does threaten the post Cold War redrawing of its western borders, and the extension of the EU and NATO eastwards. But it has no chance of overrunning Europe, let alone of becoming the kind of pan-Eurasian hegemon that Stalin’s Soviet Union or Hitler’s or Ludendorff’s Germany could have become. It therefore has no chance of threatening America directly in ways which cannot be deterred by America’s still-formidable nuclear forces. So the answer to Trump’s questions might well be that Americans should not spend so much to defend Europe. Perhaps they should leave the Europeans to defend themselves. That’s not because there are no good reasons to maintain America’s long-standing strategic commitments in Europe. It’s because those reasons are not good enough to justify what that commitment may cost.