Why American Air Power Won't Save Iraq from ISIS 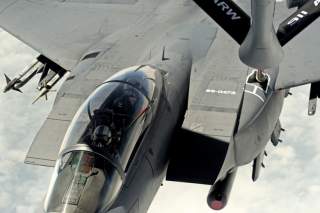 President Obama’s Thursday speech outlining America’s response to the situation in Iraq alluded to the possibility of an expanded U.S. role there, which could involve some form of aerial support to Iraqi Security Forces (ISF) fighting on the ground against the Islamic State of Iraq and Syria (ISIS) and other Sunni Arab insurgents. The coordination of air power and Iraqi allies on the ground (perhaps with a limited presence of American Special Operations Forces) would mirror U.S. interventions in Afghanistan in 2001 and Libya in 2011. The principal objective of a limited aerial intervention in Iraq would be to provide battlefield support to ISF to change the dynamics on the ground, decisively halting ISIS’s offensive and reversing its recent territorial gains. While this approach was tactically and operationally successful in Afghanistan and Libya, its long-term strategic benefits in those cases are more uncertain. There is no reason to expect that a similar intervention in the unfolding crisis in Iraq will further long-term American strategic interests—even if it achieves limited tactical successes.

At first glance, Iraq would seem to be an ideal setting for reenacting the Afghan/Libyan model. As it did in Afghanistan and Libya, airpower could have a decisive impact on the outcome of what are essentially conventional battles between Sunni insurgents and ISF. However, a closer look at those cases does not provide much ground for optimism. First, the antigovernment forces would adapt their tactics in response to American airpower and thus make it less effective. Similar to the response of Qaddafi’s forces to NATO bombing, ISIS and its allies would eschew massing their forces in the open in conventional formations (thus posing as targets for American precision bombs); their forces would instead disperse, take cover and conceal, which would significantly reduce their vulnerability from airpower, without necessarily ending their offensive. This tactical adjustment would not necessarily allow the insurgents to hold on to their newly conquered territory indefinitely. As the Libya case clearly shows, a prolonged intervention with precision airpower in conjunction with local ground forces can weaken and help overcome local opponents through attrition. With sufficient time, airstrikes would enable ISF to defend the territory it currently holds and even reclaim territory lost to ISIS forces.

A key point, though, is that U.S. intervention from the air will not bring about these results quickly. Indeed, the NATO operation in Libya took far longer and involved significantly more firepower than the allies initially anticipated. A few pinprick attacks are unlikely to alter the trajectory on the ground; and a more sustained military campaign would require firm American political will—something that may not be in the cards.

Second (and more crucial), in response to a successful counteroffensive on the part of the Iraqi government, supported by U.S. airpower, ISIS would certainly switch to the kind of guerrilla tactics in which it proved so proficient in the past (just as the Taliban did after its early defeat in 2001). In this scenario, ISIS and other insurgent groups, benefiting from the support of significant segments of Iraq’s Sunni population, could sustain a high-intensity guerrilla campaign against the Iraqi government for a long period of time. This reinvigorated insurgency may make the year preceding the insurgent “surge” (with hundreds of terrorist and hit-and-run attacks and over 1,000 deaths a month) look like a period of relative stability. Thus, an aerial intervention would not provide a lasting solution; at best, it would merely push ISIS and the broader Sunni resistance back to the position they were in just some months ago.

At its heart, the crisis in Iraq stems from an underlying political problem that military means alone cannot address. Namely, Maliki’s ethnosectarian policies—in particular, the systematic marginalization and humiliation of the Sunni minority—have provided fertile ground for the growth of several insurgent organizations (some Baathist, some Jihadist) claiming the mantle of defenders of Iraq’s beleaguered Sunnis. An American intervention would reduce Maliki’s incentive to institute the much-needed political reforms that would give the country’s Sunni community a stake in the future of the country. Put simply, this is an ethnosectarian war (with an important transnational Islamist component) whose long-term solution won’t be brought about from 15,000 feet in the air.

One might object to this noninterventionist approach, pointing to a series of negative consequences that may result. These concerns are not baseless, but either rest on implausible worst-case-scenario assumptions, or identify risks and costs that could only be avoided by taking even riskier and costlier courses of action.

First, there is the concern that ISIS might further expand south, taking over Baghdad and even some of the supergiant oil fields in the Shia-dominated south. This dire scenario, however, is highly unlikely. The much-touted ISIS assault on Baghdad has yet to materialize. Furthermore, there is no reason to expect the predominantly Shia units of ISF, which, unlike the mixed units deployed in Mosul, are cohesive, to fold the way the latter did—these people will be fighting to defend themselves and their families against what they perceive as a brutal and merciless enemy. A stalemate along Iraq’s ethnosectarian divide north of Baghdad is much more likely to emerge.

Second, as some observers have pointed out, the three-way partition of the country existing on the ground—with a large chunk of territory under Jihadist influence—may ossify. However, a U.S. aerial intervention would not fundamentally alter the status quo in this regard. At most, airpower could push the battle lines further north, but it would not eradicate a well-entrenched insurgency in the Sunni north. At that point, effective counterinsurgency would require sizable troop deployments, which may just be beyond ISF’s capacity. Massacres and displacement of civilians on a staggering scale may well ensue as the Iraqi government scrambles for a way out of the quagmire and ethnosectarian tensions spiral out of control. The United States would indirectly share responsibility for such crimes.

Third, if the Obama administration fails to take action in Iraq, the Iranians might step up to the plate and shore up their ally, Maliki (indeed, it’s quite likely that the Iranian forces are already involved). American intervention could conceivably prevent a marginal increase in Tehran’s (already significant) influence in Iraq, but this benefit pales in comparison to the costs and risks involved in embarking on an ill-thought-out intervention.

Fourth, failing to get involved in Iraq could have negative implications for the civil war in Syria, as ISIS operations there can benefit from bases across the border. But, again, an airpower intervention would not deny ISIS a strong presence in Iraq’s Sunni heartlands.

Finally, some might claim that by not intervening, the Obama administration would be giving up a precious opportunity to exert leverage on Maliki’s government and thus push it to address the Sunni community’s fundamental concerns and embrace genuine power-sharing. But this argument gets it backwards: the only plausible scenario in which Maliki would make unpalatable concessions is one in which the alternative is the loss of even more power. A bailout in the form of a U.S. military intervention would remove any incentive provided by the current crisis for him to consider far-reaching political reforms.

Ultimately, the only way to decisively weaken ISIS would be for moderate Sunni groups to turn against it. The experience of the Anbar awakening suggests that this is not a far-fetched possibility. Given that what keeps together the Baathist and Jihadist components of the insurgency is opposition to Maliki, the emergence of a stalemate, with the rebels and the government solidly in control of their strongholds, may represent a window of opportunity for the non-Jihadists to eliminate the ISIS threat without fear of a government counteroffensive. Their willingness to do so may be strengthened by credible steps by the Iraqi government towards genuine power-sharing–which, for example, could take the form of concessions of important cabinet positions to key Sunni figures. U.S. diplomacy can play a role in clearly conveying this message and promising additional support after Maliki makes the necessary political adjustments. By contrast, an airpower intervention risks undermining the only possibility of a desirable outcome: American involvement would embolden Maliki and prevent the emergence of a stalemate in the battlefield, which could trigger the fragmentation of the insurgent coalition. The current situation in Iraq, therefore, may be an ideal setting for careful application of Obama’s “don’t do stupid sh*t” doctrine.

Erica D. Borghard is an Assistant Professor at the United States Military Academy at West Point. She received her Ph.D. in Political Science from Columbia University. Her views are personal and do not in any way reflect the opinions of the United States Military Academy. Costantino Pischedda is a Ph.D. candidate in political science at Columbia University. His dissertation focuses on civil war alliances.