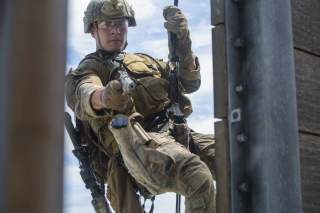 Last year, the Center for the National Interest partnered with the Charles Koch Institute to host a foreign-policy roundtable. One of the discussion prompts was: Our current foreign policy is problematic because . . . Click here to watch the rest of the videos in the series “On the Home Front: The Domestic Side of International Relations.”

According to retired Army colonel and bestselling author Andrew Bacevich, the American military is today being used to solve problems it was not designed to solve. Current U.S. foreign policy, he said, is “based on a fundamental misunderstanding of the efficacy of military power, particularly American military power,” which leads foreign-policy elites to select objectives that do not align with our frequently misunderstood strategic reality. As a result, Bacevich concludes, “we engage in wars that are unnecessary and counterproductive, notably in large parts of the Islamic world.”

At the end of the Cold War, the United States found itself in an “astonishingly favorable” position. Thanks to peaceful, friendly neighbors to the north and south, large oceans separating it from hostile powers abroad, and a level of economic might that dwarfs its closest competitors, the United States was ensured a high degree of prosperity and security. However, Bacevich warns, “The record of the past . . . twenty-five years is one of squandering those advantages.”

Columbia University’s Richard Betts attempted to explain why the United States misunderstands the role of its military forces. He argues that the First Gulf War had a “pernicious effect” on policymakers bridging the gap between the Cold War and post-Cold War era. Many elites perceived the First Gulf War as a “perfect military success” that came at “negligible cost.” According to Betts, this “naturally encouraged people to assume” that the U.S. military could be used to manage global affairs “very effectively at acceptable cost.”

According to Harvard University’s Stephen Walt, elites have failed to internalize the fact that the American military cannot be used to cheaply manage global affairs. From his perspective, policymakers have compounded this problem, given their “almost complete lack of accountability within the foreign-policy establishment.” Walt points out that this establishment is a system in which those in power who make mistakes “wait a few years … get the same job or a better job, and they get to repeat the same errors.” Bacevich adds that the military elites bear some of the responsibility here, because “the military leadership has failed to evaluate our military performance” in a way that accurately reflects what the U.S. forces can and cannot do.

The Cato Institute’s Christopher Preble argues that the United States frequently fails to connect its military objectives with its desired political ends. Even post hoc evaluations fail to address the issue, he says, because “we measure the success or failure of military campaigns in a very narrow, discrete way—numbers of enemies killed, numbers of bombs dropped, numbers of sorties flown—and we don’t scrutinize that none of these things have actually delivered a political end worth fighting for.”

By failing to connect means with ends, policymakers ignore the strategic and tactical improvements that could lead to better policy decisions, argues the Charles Koch Institute’s William Ruger. Barry Posen of the Massachusetts Institute of Technology agrees, saying that foreign-policy elites have become “very casual about deciding to reach for the military instrument.” Examples include extending American power to distant shores to topple foreign leaders and engaging in seemingly endless and futile attempts to build democratic nations where previously there were none. Posen states that, unfortunately, “there’s this belief that if you try military force and it doesn’t work, we’ll add some more and somehow, some way, we’ll maneuver, and then we’ll produce a nice outcome in a country that’s disunited.” But, he says, “we have no cause-effect knowledge of how to do that!”

Many of the panelists view the United States’ failure to follow a prudent foreign policy as disrespectful to our men and women at arms. Bacevich sees the persistent “misuse” of American military power as resulting in the “abuse of American soldiers.” Notre Dame’s Michael Desch concurs, saying that “our veneration for the troops is a mile wide and less than a centimeter deep.” Although Americans often give well-intentioned benefits, perks and thanks to military members, he says, we fail to do “the real things necessary to support the troops … [like] being careful about when we send them in[to] harm’s way.”

William Ruger, a Navy reservist and veteran of the war in Afghanistan, also agrees. He concludes that the United States’ unwillingness to critically examine its often aimless grand strategy is “fundamentally disrespectful to [the] seven thousand Americans that were killed in Iraq and Afghanistan, [the] fifty-eight thousand Americans that were severely wounded,” and those who filed nearly one million disability claims due to these wars. Ruger’s frustration over the unjustifiably high, true cost of imprudently using the military to manage all international affairs is shared by many of the panelists.

Watch the rest of the videos in the “On the Home Front: The Domestic Side of International Relations” series here.

Image: Marine simulates attacking a target through a window while rappelling down a rappel tower. Flickr/U.S. Department of Defense