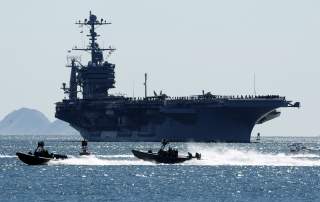 Today, the centerpiece of the U.S. Navy is undoubtedly the nuclear-powered aircraft carrier, a hugely expensive but immensely flexible asset that can turn its hands with some success to almost every naval role imaginable. Indeed their versatility is the stuff of legend, prompting the popular claim that whenever a crisis erupts in some distant part of the world, the first thing on everyone’s lips is “Where is the nearest Carrier?” With such accolades, it may be difficult to imagine a time in the future when this power projection ability can no longer be guaranteed, but recent developments in surface warfare and air warfare are hinting that that time may not be too far off. The problem has essentially two parts: First, the radius of action of the offensive piece of the carrier’s arsenal, the air wing, has been allowed to decline with successive generations of tactical aircraft. Today, the commonly-quoted figure of around five hundred nautical miles is about half that of an equivalent air wing in the 1960s. Second, the new developments in precision anti-ship weaponry, most notably the Chinese DF-21D “carrier-killing” ballistic missile, promise effective ranges of roughly double this figure.

While many may question the accuracy and targeting system of ballistic missiles, even modern, anti-ship cruise missiles such as those fielded by Russia and China, are fast approaching engagement ranges that would be very restricting to effective carrier operations offshore. While these operating constraints are probably the most important, they are not the only ones bedeviling carrier operations. Wildly escalating costs, both in procurement and operation, and the proliferation of less expensive delivery systems for precision ordnance may combine to make the naval aviation option less attractive in the longer term. In the words of one author, “If the fleet were designed today, with the technologies now available and the threats now emerging, it would likely look very different from the way it actually looks now.”

Voices of concern are one thing, but navies are nothing if not conservative in their outlook. The United States has invested heavily in carriers since the World War II and, like the battleship navy before it, the resulting culture and infrastructure within the service is unlikely to go quietly. Nor might such a drastic step even be necessary. In that war, carriers fought other carriers in order to gain sea control for their fleets. In effect, they were simply continuing the essential rationale for navies since their inception: namely that the nation that can put together the best-handled fleet with the most powerful (and longest range) weapons would likely prevail. The advent of the aircraft at sea offered an offensive capability and power over ranges that the gunners could not match and, at the same time, it completely invalidated the surface torpedo threat. It’s a small wonder then that within a few years the once omnipotent battleships had been re-tasked to fleet air defense and fire support missions, leaving the business of sea control to be fought over by carrier groups hundreds of miles apart.

Nothing stands still, however, and with the demise of the Soviet naval threat at the beginning of the 1990s, there was realistically no other naval power that could compete with the naval forces of the Western alliance. As a result, the U.S. Navy has busied itself with projecting power over land in support of the joint force. A whole generation of institutional doctrine has sprung up to provide for this mission and today the projection of power over land seems almost the “sine qua non” for the entire service. Central to this evolution has been a steady decline in the combat power of the group of ships accompanying the carrier, the so-called “Carrier Strike Group” (CSG). With no appreciable air, surface and sub-surface threats to contend with, the number of escorts has diminished; today, the numbers of aircraft embarked fall far short of the actual capacity of the carrier itself. Has the U.S. Navy allowed itself to be lulled into a false sense of security by all these years of dealing with second or third-rate naval threats? In the words of James Holmes, “the CSG is a concept designed for safe seas,” however, things have moved on yet again in the last two decades and today’s seas seem far from safe. As Holmes explains, and in the face of a much more competent naval threat, there is at least an argument that would have the CSG’s mission focused once again on the business of sea control.

The aim of this article is to outline some reasonably low cost measures that ought to be taken now to begin this process of readjustment. It will do this by developing Holmes’s ideas a little further: first, by examining the growing anti-ship missile threat in a little more detail and then by proposing that, even in its current, short-range configuration, with only minor modifications, the carrier air wing can still present a formidable counter in the anti-ship role. Since the Russian Anti-Ship Cruise Missile (ASCM) threat is arguably the most mature and in the interests of brevity, our examination will be confined to these systems but it is important to appreciate that parallels can, and no doubt should, be drawn with similar capabilities being developed in the Chinese Navy.

Most experts agree that the main vulnerability of an aircraft carrier group in contested waters stems mainly from the proliferation of increasingly sophisticated ASCM’s, both ashore and afloat. If these are combined with modern, capable surface and sub-surface launch platforms, then the result may impose significant limitations on the U.S. Navy’s ability to project power ashore. There are two potential ways in which ASCM’s could be used to achieve this goal. First, they can be combined with other, shore-based anti-ship weapons to form a part of a strong, layered defense, specifically designed to make any attack from the sea a prohibitively costly endeavor. Few countries are capable of coordinating such a threat, although Russia and China have both demonstrated their capabilities and intentions to do just this as a part of their broader maritime strategy.

The second method is essentially tactical and relies more on mass and coordination. A synchronous deployment of surface ships and potentially submarines armed with suitable ASCM’s that can be fired in salvos, could potentially overwhelm a western group’s air defenses with repeated, multi-directional attacks by swarms of missiles that can fly at supersonic, and potentially hypersonic, speeds. This situation could be compounded by profiles that have the missiles perform evasive maneuvers in the terminal stage of flight. Essentially, the implications are that an expensive asset, such as a nuclear aircraft carrier, might be successfully deterred, rendered mission incapable, or even destroyed by much smaller and cheaper warships, provided the latter are armed with sufficiently sophisticated ASCM’s.

In effect, this is nothing more than a modern version of the French Jeune Ecole naval strategy of the 1880’s, which proposed that swarms of small, inexpensive torpedo craft might effectively deter or counter the British battleship blockade strategy. The theory went that the Royal Navy would likely be unwilling to risk the loss of their very expensive battleships under these circumstances and thus it offered the French a chance to compete with a maritime superpower for a fraction of the expenditure. The parallels with the Russian use of corvettes today are marked, but theoretically any country with sufficient number of ASCM’s, domestically produced or imported, might be able to deploy them in such a way that a sophisticated group of warships would be faced with potentially devastating losses. Could today’s ASCM threat do to the aircraft carrier what the torpedoes (and later, carrier-borne airplanes) did to the battleship?

Russia is perhaps the leading non-Western producer and exporter of ship-borne, anti-ship cruise missiles. Like the Jeune Ecole before them, it seems that the Russian naval planners interpret their country’s strides in missile development as an opportunity to blunt the power-projecting capabilities of the U.S. Navy without having to spend the money and effort necessary to build a balanced naval force. Specifically, they are proposing to employ a combination of new, ASCM-equipped frigates and corvettes backed up by submarines and a few old cruisers acting as quasi-Arsenal ships, as a force that can challenge the US naval power projection capability in areas the Russians deem essential.

Long-range cruise missiles and ASM’s have been in the Russian navy's arsenal for some time, but were not fired in anger until October 7, 2015, when four light frigates and corvettes of the Caspian flotilla fired twenty six 3M-54 Kalibr missiles at targets in Syria, about a thousand miles away. In 2016 and the first six months of 2017, cruise missiles have been launched on several occasions against Syrian ground-based targets from a variety of platforms which have included both surface ships and submarines, all deployed in the Mediterranean. The multiplicity of platforms essentially served to demonstrate that the Kalibr missile could be fired from any surface ship that could accommodate a vertical launch shaft. All the ships that took part had the eight-shaft clusters of the universal vertical-launch system (VLS). More importantly in operational terms, the launches demonstrated that the Russian navy now possesses a long-range precision strike capability against poorly defended stationary targets. Naturally, the state media made the most of this propaganda coup, erroneously claiming in many cases that the precision guidance and thousand mile range of the Kalibr could give the Russian Navy an edge over a U.S. carrier group.