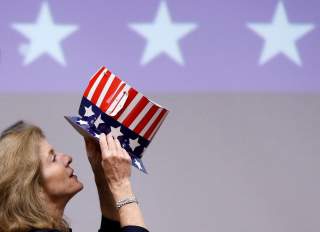 For “Never Trump” Republicans who opposed the president’s very candidacy, as well as for party politicians, officials, operatives, intellectuals and others who have reluctantly accommodated themselves not merely to Trump’s election but also his redefinition of Republicanism, the real challenge to the GOP is not that it will cease to exist as an electorally-successful label for people who oppose Democrats. It’s what is under the label.

Indeed, from this perspective, Barone’s narrative provides cold comfort to Trump’s intra-party opponents—he describes a Republican Party that has already historically flipped its position on federal power (from supporting to opposing) and foreign policy (from skeptical to interventionist) even as the Democratic Party flipped in the other direction on each issue. A cynic might ask whether America’s political parties can survive almost anything because the majority of the politicians that comprise them are willing to agree to almost anything that preserves and advances their careers.

THIS RAISES a larger question similarly unanswered in How America’s Political Parties Change, which focuses heavily on broad historical and political trends and much less on political leaders. To what extent have party leaders shaped the fates of the Republican and Democratic Parties? Are they merely doing their best to stay relevant, at the lowest cost of changes in policy and personnel amid unending social evolution? This view, which shares some of the determinism of Karl Marx’s materialist assertion that a society’s economic substructure defines its political superstructure, minimizes political leaders’ volition. Since at least some Republican leaders tried to prevent Trump’s nomination, for a period of time, there is a sharper question: did Trump’s primary opponents and their supporters fail due to a combination of strategic and tactical mistakes in responding to rising populism and to Trump’s candidacy or, alternatively, did they simply have no chance because circumstances forced Republicans to choose between accommodating to Trump and losing in 2016, with the latter choice being more unpleasant? Given his front-row seat as one of Washington’s most prominent political analysts, Barone’s perspective on these questions would be interesting for many readers and a useful addition to the book.

This omission is especially notable, given that Barone devotes several pages to assessing the reasons underlying Hillary Clinton’s election loss. Here, Barone is not shy in pointing out flaws in Democratic strategy, such as the assumptions that an increasing share of nonwhite voters would provide important advantages, that a “blue wall” of states voting Democratic in every election between 1988 and 2012 would do the same, and that midwestern states were reliably Democratic—a view, he reminds his readers, that Hillary Clinton’s campaign officials adopted despite calls from former President Bill Clinton to focus on blue-collar voters there. He also points to Clinton’s “lies and evasions”—a formulation that may please Republican audiences but may not help to bring otherwise open-minded Democrats along his analytical path—and her statement that “you could put half of Trump’s supporters into what I call the basket of deplorables”—something that could not but alienate some voters still on the fence.

Among structural factors behind Clinton’s loss—especially in decisive midwestern states—Barone counts her inherent inability to match former President Barack Obama’s support among African-American voters; Trump’s strength among union voters as a consequence of his opposition to free-trade agreements; and Trump’s alignment with the Midwest’s “historical proclivity toward pacifism, isolationism, and dovishness” in foreign policy, in contrast to Clinton’s past support for America’s wars in the Middle East. Barone sets out these thoughts in concluding sections focused on the South and the Midwest as the two regional drivers of Trump’s surprising electoral success.

LOOKING AHEAD, How America’s Political Parties Change should encourage caution among Democrats who believe that Donald Trump stole the 2016 election and is thus doomed to defeat in 2020 regardless of who runs against him. Over the longer term, the book makes a strong case that neither the Democrats nor the Republicans should allow themselves to be carried away in pursuing seductive visions of enduring one-party rule, something that is not only impractical and self-defeating, but also prone to corruption and antithetical to foundations of democracy as a system of government.

George Washington effectively summarized the strengths and weaknesses of political parties in his Farewell Address:

There is an opinion that parties in free countries are useful checks upon the administration of the government and serve to keep alive the spirit of liberty. This within certain limits is probably true; and in governments of a monarchical cast, patriotism may look with indulgence, if not with favor, upon the spirit of party. But in those of the popular character, in governments purely elective, it is a spirit not to be encouraged. From their natural tendency, it is certain there will always be enough of that spirit for every salutary purpose. And there being constant danger of excess, the effort ought to be by force of public opinion, to mitigate and assuage it. A fire not to be quenched, it demands a uniform vigilance to prevent its bursting into a flame, lest, instead of warming, it should consume.

Barone’s pithy book won’t end arguments about 2016—and clearly isn’t intended to do so. But for those with an interest in the lessons of America’s political past for our future, Barone supplies a valuable guide.