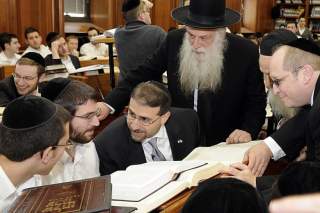 When the idea of (re)introducing Torah study to non-Orthodox Hebrew school is mooted—in Reform Judaism, textual interaction with Torah is usually limited to rehearsing the oral recitation of a single Torah “portion” for a bar or bat mitzvah—it elicits reactions like the one from a history student at Sheffield University in England, who was recently asked by the Independent why millennials are declining to read literature classics. “Students,” she opined, “might be more inclined to read what academics want them to if our curricula weren’t overwhelmingly white, male and indicative of a society and structures we fundamentally disagree with because they don’t work for us.” Caroline Glick admitted that getting Torat Yisrael, Am Yisrael and Eretz Yisrael back into the conscience of mainstream American Jewry will be difficult “in a culture where people expect instant and continuous gratification without knowledge.” “But,” she appended, “if American Jewish history teaches us anything, it teaches us that they are all necessary.”

Indeed. Eighteenth- and nineteenth-century German Jews, after great consideration of the potential costs, amended particular aspects of Judaism with the express purpose of acculturating into Enlightenment Europe. Twentieth- and twenty-first-century American Jews have readily spurned most of the beliefs and customs that comprised Judaism for more than three millennia, yet simply cannot figure out why they’re assimilating out of existence. Karl Marx, the exemplar of assimilation, who descended from a venerable line of distinguished German rabbis, opened The Eighteenth Brumaire of Louis Napoleon by quipping that history repeats itself, “the first time as tragedy, the second time as farce.” In the ultimate dialectical feat, American Jewry is proving that, like with most things, Marx had it backwards all long.

Jonathan Bronitsky is a commentator and historian working on a biography of Irving Kristol to be published by Oxford University Press.