Why Are NBC and Megyn Kelly Catering to Putin? 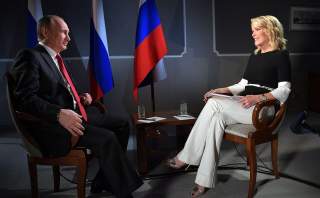 It’s no secret that profit-driven cutbacks, the pressure for clicks and buzz, and a general lack of understanding of the topics they are covering distinguish, more often than not, the major news networks. Edward R. Murrow’s dictum that “we cannot make good news from bad practice” is honored more in the breach than in the observance. But even by those standards, NBC’s Megyn Kelly managed to set something of a new low with her visit to the St. Petersburg International Economic Forum, where she hosted the plenary session, and her interview with Russian president Vladimir Putin.

This was supposed to be her big get, the proof that, in landing the ruthless autocrat, she could move seamlessly from cable television to broadcast news. Certainly Kelly went all-out to profile herself. The night before the forum took place, the New York Times’ Vanessa Friedman noted, NBC sought to gin up some extra publicity by tweeting pictures of Kelly at a dinner party with Putin and Indian prime minister Narendra Modi, where she wore a “sea-blue crushed-velvet off-the-shoulder cocktail dress with black spaghetti straps and a high slit, by the designer, Yigal Azrouel.” FootwearNews.com adds that her heels reached a soaring 4.5 inches. But it was all downhill from there.

The atmosphere may have been festive, but the purpose of the forum is not simply to allow Putin to shine, but also to demonstrate that Russia is not isolated and remains an attractive place for foreign investors. According to the Russian government, the forum attracted an unprecedented fourteen thousand participants, including the Indian prime minister and UN Secretary General Antonio Guterres. Reports from Russia indicate that deals for investment capital amounting to some 2 trillion rubles were signed, though whether these transactions will actually be consummated is another matter. Putin himself publicly called on American business to encourage Washington to cooperate with Moscow.

Simply by appearing on the podium with the Russian president, Kelly played a part in Putin’s campaign to influence American policy. She legitimized an event that the Obama administration explicitly discouraged American companies from attending. In addition, her appearance raises the question of whether she was compensated financially, or in the form of receiving the interview as a quid pro quo shortly after her appearance at the forum. Put bluntly, the plenary session that Kelly moderated was supposed to allow her to appear to be an independent and objective journalist, but was as phony as they come. It consisted of Putin’s pals—Modi; Christian Kern, the federal chancellor of Austria; and Igor Dodon, the president of Moldova. This wasn’t a debating society, but a mutual admiration club. Anyway, at a time when allegations of untoward Russian influence are swirling around Washington, it’s particularly disingenuous for NBC to act as though it can exempt itself from basic journalistic standards.

Then there was Kelly’s interview with Putin. It offers an object lesson in the perils of getting too close to an interview subject. Upon her return to the United States, Kelly was thrilled to report about Putin being “warm” and “personable.” She observed, “honestly he was warm behind the scenes, he laughed, he smiled, he cracked jokes, he seemed like a normal person,” on the Today show Monday. “Which in and of itself was a little surprising given all we know and have heard about him.”

But was it really surprising that Putin, a former KGB agent who has climbed to the top of the Russian political system, can turn on the charm at will? Kelly sounds like an ingénue, rather than the hardboiled journalist she has always fancied herself. There is a long history of journalists truckling to the Kremlin, not to mention government officials. Her effusions about Putin sound one step removed from former American ambassador Joseph E. Davies, who rhapsodized in his memoir Mission to Moscow that Stalin’s “brown eyes are exceedingly kind and gentle. A child would like to sit on his knee and a dog would sidle up to him.”

During the interview, Kelly didn’t throw softball questions. But they were stale, unimaginative and predictable. Putin, who thrives on verbal combat, often looked bored with Kelly’s pallid attempt at interrogation. In essence, Kelly ended up giving Putin another forum to ventilate his grievances without offering any new insights into what makes him tick. Indeed, it was Putin who burned Kelly. She was outmatched, outgunned and outmaneuvered. He deftly turned around her own fawning behavior on Kelly.

When she asked him about former Trump administration national security advisor Michael Flynn, Putin observed, “You and I, we have a much closer relationship than with Mr. Flynn. You and I met up yesterday evening. You and I have worked all day together. We are meeting yet again at this moment.” He added, “I almost did not talk to him. . . . If Mr. Flynn and I had this kind of interaction, while you and I, we have spent an entire day together, and Mr. Flynn was fired from his job, you then should be arrested and put in jail.” As her final question, the best she could do was ask him, “You’ve been in the leadership of this country for 17 years now. Has it taken any sort of personal toll on you?” All that was missing was Kelly asking Putin whether he needs more “me time.”

Small wonder that Kelly’s interview has not exactly received rave reviews, let alone stellar ratings. Rolling Stone called her interview a “lukewarm flop,” Variety said it was “passable, but not much more than that.” NPR deemed it a “tepid debut.” But perhaps the most telling summation came from NBC Today cohost Savannah Guthrie, who joked that Putin and Kelly had hit it off so well that she might well be “getting a Christmas card” from him. For now, it was Kelly that handed Putin a shiny gift in St. Petersburg.

So much for Kelly’s cherished reputation as a formidable interviewer. Oh, how the mighty have fallen!