Why Are We Rebuilding the ‘Nuclear Sponge’? 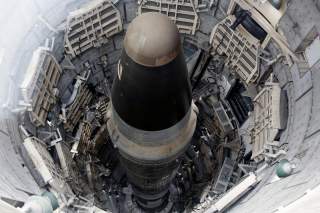 The media is abuzz about the epic battle between corporate titans Northrop Grumman and Boeing over who will win the $100 billion contract to build a new nuclear-armed ballistic missile. For those who are keeping score, it looks like Northrop will win a sole-source contract, which would be a disaster for taxpayers.

But media coverage of the Clash of the Titans is missing the real story. This is not about contractor wars or sweet-heart deals. This is about the integrity of our government: why, thirty years after the end of the Cold War, are we rebuilding nuclear weapons that we do not need? Why are we spending national treasure to buy weapons that make us less safe?

What if we told you that residents of Colorado, Montana, Nebraska, North Dakota, and Wyoming are being used as bait in a nuclear war with Russia? Surely, no sane person would accept or offer such terms. However, if you live anywhere near these states, you already have a nuclear target on your back.

Welcome to the “nuclear sponge.” A bizarre idea that has outlived its questionable Cold War-era usefulness, the nuclear sponge is the United States’ collection of land-based intercontinental ballistic missiles (ICBMs) intended to “soak up” a nuclear attack. Before the development of nuclear-armed submarines that can hide their locations at sea, ICBMs were the crux of American nuclear strategy. Today, however, their only purpose is to draw fire away from other targets (like New York and San Francisco) in the (suicidal and thus highly unlikely) event of a first strike by Russia. The Air Force does not plan to launch the missiles in a war, but to have them draw a nuclear attack to the Upper Midwest.

We’re not making this up—that’s what former Defense Secretary Jim Mattis told Congress. However, sacrificing the Upper Midwest not only undervalues the people who live there but would not actually spare the residents of other states. A major nuclear war with Russia would doom the entire nation. It would little matter whether one resides in Manhattan or Montana.

Why then are we rebuilding the nuclear sponge? The answer, as House Armed Services Committee Chair Adam Smith (D-WA) recently highlighted, has much more to do with parochial interests and money than national security.

When asked at a recent press conference why states would want to host the missiles, and thereby put themselves at risk, Smith said, only partly in jest, “They’re fond of their missiles. Apparently, they want to be targeted in a nuclear first strike.” And then, more seriously, he said “They want the jobs . . . no matter the circumstances. And that’s not rational. It’s parochial.”

With current ICBMs getting older, the Trump administration has greenlit a new cohort of missiles as part of an almost $2 trillion nuclear rebuild plan over the next thirty years. The price tag for the new ICBM alone is potentially $140 billion. That contract is currently slated to go to Northrop Grumman, even as it fights off a Federal Trade Commission investigation for unfair competition, which may cost taxpayers “billions.”

Northrop Grumman and others have hijacked the nuclear-security agenda of the United States through the usual Washington channels: lobbying and campaign contributions. In the 2018 election cycle, Northrop spent $5.6 million in campaign contributions. In fact, Northrop spends more than any other defense contractor on lobbying and is just behind Amazon and Facebook. Defense contractors have grown even more powerful with a willing ally in the White House. Simply put, the Trump administration has filled its top national-security ranks with people holding extensive ties to major defense contractors.

Programs such as a new ICBM are strategically unnecessary, economically unsustainable, and morally abhorrent. The missiles would be destroyed in a first strike (Russia knows where they are; you can find them on Google Maps) and serve no purpose except to “absorb” blows in a war whose fallout would kill most Americans anyway. Some jobs are created—but far more jobs could be created if the money was spent in other ways. In 2019, there are surely better ways to employ people than to have them guard Cold War relics. As Smith observed after visiting bases that host nuclear weapons, “what struck me was that the job is unbelievably boring.” Maybe that’s why substance abuse continues to plague these sites, with servicemembers literally falling asleep on duty.

Clearly, our nuclear policy needs a reboot. As Sen. Elizabeth Warren(D-MA) has said “Take any big problem we have in America today and you don’t have to dig very deep to see the same system at work . . . despite our being the strongest and wealthiest country in the history of the world, our democracy is paralyzed. And why? Because giant corporations have bought off our government.”

Warren was talking about climate change, guns, and healthcare, but her remarks hold just as true for nuclear weapons. The next president must tackle corruption in nuclear policy aggressively—by throwing away the nuclear sponge.

Tom Collina is Policy Director and Akshai Vikram is a Hale Fellow at Ploughshares Fund, a global security foundation in Washington DC.