Why Aren’t the Democratic Presidential Candidates Pushing for Bold Change in the Middle East? 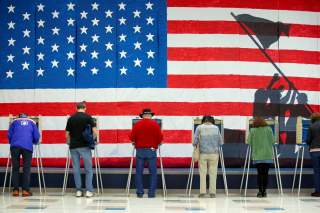 Presidential candidates on the Left are calling for great, bold ideas and criticizing moderate Democrats for their pragmatism. Elizabeth Warren seeks “big, structural change.” Bernie Sanders calls for nothing less than a revolution. But little of this bravado and grand thinking was in evidence when a parade of Democratic presidential candidates addressed the 2019 convention of J Street, a left-leaning Jewish group, whose slogan is “The Political Home for Pro-Israel, Pro-Peace Americans.” The positions presented made good sense if one wanted to satisfy local American political sensibilities, walking a careful line between appealing to progressives Jews, many of whom are very critical of the Israeli government (and quite a few of whom are quite critical of Israel itself and support the BDS movement) and—the traditional Jewish groups, which include many who are staunch supporters of Israel.

The same positions, though, have at best marginal importance in the reality of the Middle East. Even if all of them were implemented, Israel would still occupy the West Bank, Gaza would still be the largest open-air prison in the world, and the two peoples would still be at each other's throats rather than living together securely and peacefully.

One issue the various candidates danced around was under what conditions to withhold the $3.8 billion in aid the US grants to Israel each year. Bernie Sanders and Pete Buttigieg stated that “some” strings should be attached to the aid. Julian Castro stated that such a restriction “wouldn’t be my first move” but “I wouldn’t take it off the table,” a position that should earn him a prize for being on both sides of an issue. Michael Bennet hedged his position even more; he would only carefully weigh the impact of withholding the aid. Amy Klobuchar would not go that far, explaining: “It’s not a good idea to negotiate these things right now.” Meanwhile, Israelis mock the whole idea that the United States could twist their arm by withholding $3.8 billion, given that the sum amounts to a small fraction of the Israeli budget.

On other issues, the various candidates made statements whose mildly critical subtexts were pleasing to the left-leaning audience while being so vague that they did not commit the candidates to much of anything should they get elected. For instance, Bennet stated that “he would be open” to changing the United States’ protection of Israel in the United Nations, especially if there were more annexations. If Bennet considered the situation in the Middle East, then he would acknowledge that a major reason the UN cannot help promote peace in the region is that it has shown itself to be extremely biased against Israel, even when Israeli leaders—such as Yitzhak Rabin, Ehud Olmert, and Ehud Barak—were working hard to bring about the two-state solution.

In July, Axios asked the various candidates if they would return the U.S. Embassy in Israel to Tel Aviv if they became president. In responding to this question, the prize for being on both sides of the issue and irrelevant in the Middle East goes to Sen. Cory Booker (D-NJ). According to Axios, he feels that “[n]ow that the embassy has been moved, I do not see moving it back as either practical or productive.” Klobuchar told Jewish Insider that she thinks the embassy move “would have been better if [it] was done as part of a negotiation for a two-state solution. I think it’s unfortunate it was done the way it was done but I wouldn’t reverse it.” Although many have attributed the great symbolic difference to the positioning of the embassy, sadly it would change little in the Middle East if tomorrow the Embassy would be moved to Timbuktu.

The fact that many of these statements are made for domestic political consumption rather than for addressing the conditions in the Middle East is highlighted by the following statement by Jeremy Ben-Ami, the founder and president of J Street: “It’s time to act like the big brother or the parent and to say ‘enough is enough and we’re going to take the car keys if you don’t stop driving drunk.’” As someone who grew up in Israel, and fought for it when it was invaded by seven Arab armies hours after it was born in 1948, I can assure you that such imagery is not going to sway Israelis, who sit at the intersection of several powder kegs, to turn over the keys to their destiny to those who comfortably travel on J Street.

The candidates’ statements should be compared to a proposal that I believe is a game-changer, one that should be palatable to both the left and the moderates they are sure to kvetch. The proposal calls for offering the millions of Palestinian refugees, who have been sitting in refugee camps in Lebanon and Jordan for three generations, a substantial sum of money if they agree to leave the camps and become citizens of the respective countries they live in. The host states would also receive support to pay for the costs involved in integrating the refugees into their economies. Many Palestinians privately admit that they realize that the prospect of their being able to return to the home their grandparents or great-grandparents left in Israel is small and the possibility the UN welfare, on which they subside, will be further cut, is considerable. Because those who accept such offers are often threatened by the hardcore Palestinians, those who consider the offer to normalize their lives would be told that the program would only proceed if a substantial number agrees to accept the offer, so they could feel relatively safe to follow their preference.

The reason I consider this proposal a game-changer, unlike the ones paraded before J Street, is that all the other elements needed for moving toward a two-state solution can be attained and are, in effect, already informally agreed to by those of both sides who want such a solution. Both sides agree that the green line will provide the border between the two states, following a small adjustment, of about 6.5 percent of the current territory configuration. That is, Israel would get some land now on the west side of the green line, the area many settlers live, and in return, the Palestinians would get some other land, now on the east side of the line. The Palestinians will have their capital in East Jerusalem or in some land now south of Jerusalem that would be added to its jurisdiction. Some settlers would be evacuated and some left to choose if they wish to live in Palestine or evacuate themselves. All this assumes that the refugee problem will be solved, without them all returning to Israel, because otherwise, even if there is finally an election on the West Bank, and a representative leader is elected, that person, for moral reasons and fearing for his life, could not accept the two-state solution unless the refugee issue is first settled. J Street, which sees itself as a promoter of the two-state solution, may wish to lead those who will raise funds for the settlement of the refugees rather than dance around statements that please its members but will not move the needle in the Middle East, a place that needs all the help it can get.

Amitai Etzioni is a University Professor and professor of international affairs at The George Washington University. Click here to watch a recent, four-minute video of him called “Reclaiming Patriotism, Political and Social Life after Trump.” His latest book, Reclaiming Patriotism, was published by the University of Virginia Press in 2019 and is available for free download. In writing this article, I benefitted greatly from Jodi Rudorden’s reporting in the Forward, “At J Street Conference, Democratic Candidates Pressed on Cutting Israel Aid.”