Why Armenia's Allies Are Letting It Down 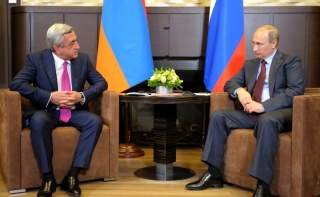 The Nagorno-Karabakh conflict between Armenia and Azerbaijan has dominated and shaped Armenia’s post-independence foreign and security policy since the dissolution of the Soviet Union in 1991. In a quest for military and economic support in its 1991–94 war against Azerbaijan, Armenia joined the Moscow-led Commonwealth of Independent States and its military wing, the Collective Security Treaty Organization (CSTO), in 1992. The active phase of the Nagorno-Karabakh conflict ended with the 1994 cease-fire. The agreement left Nagorno-Karabakh and seven adjacent regions—roughly 20 percent of Azerbaijan’s internationally recognized territories—under Armenia’s occupation.

Yerevan’s reliance on Russia and the CSTO for its security has only increased since 1994. Currently, Armenian borders are jointly protected by the CSTO, and Russia has one of its largest military bases abroad in the Armenian city of Gyumri. Moscow also controls key sectors of the country’s economy. When, after lengthy negotiations with the EU on the signature of an Association Agreement, Armenia unexpectedly declared its intention to join the Russia-led Eurasian Economic Union (EEU) in 2013, the government tried to sell the decision to citizens by claiming that the move would further reinforce the country’s security. "When you are part of one system of military security it is impossible and ineffective to isolate yourself from a corresponding economic space," declared President Serzh Sargsyan in a news conference, attempting to justify his government’s U-turn in joining the EEU.

Having entered into a military and economic alliance with its Eurasian neighbors, Armenia has long sought to involve them in the Nagorno-Karabakh conflict, both as a means of deterring Azerbaijan and in order to gain public commitments to defend Armenia, in the event that full-scale warfare erupts again. On December 21, 2015, when tensions escalated on the front line, Sargsyan stated at the CSTO Security Council session in Moscow that “whenever the Azerbaijani armed forces use weapons against Armenia, they fire at Astana, Dushanbe, Bishkek, Moscow and Minsk. So, the CSTO should respond to Baku’s actions.” Armenia and the separatists have long held the illusion that CSTO membership constitutes a security guarantee against Azerbaijan’s efforts to reclaim Nagorno-Karabakh and the other occupied regions.

The first serious test of this belief came in early April, when violence erupted in Nagorno-Karabakh between the armed forces of Azerbaijan and Armenia. But no CSTO members voiced open support for Armenia, either during the conflict or afterwards. On the contrary, two CSTO and EEU members openly supported the Azerbaijani position, prompting a serious reaction in Armenia. On the second day of the escalation, April 3, the Ministry of Foreign Affairs of Belarus released a statement urging Azerbaijan and Armenia to continue seeking a peaceful solution to the conflict “in accordance with the generally recognized principles and norms of international law, first of all, on the basis of respect and guaranteeing of the sovereignty, territorial integrity and inviolability of borders, as well as the relevant UN Security Council resolutions and decisions of the OSCE.” Because the Council’s resolutions recognize Nagorno-Karabakh as Azerbaijan’s sovereign territory, Armenia took umbrage at the statement. Yerevan has summoned the Belarusian ambassador to communicate its disappointment with the statement, and has criticized Belarus for failing to uphold it obligations before its military and economic ally, citing bilateral ties through the CSTO as well as the EEU.

Another CSTO and EEU member, Kazakhstan, also demonstrated support for Azerbaijan. Although an official statement released by Astana immediately after the outbreak of hostilities took a neutral tone and called upon the sides to avoid further escalation, Kazakhstan refused to attend the EEU summit that Yerevan was due to host on April 8, 2016. This was interpreted in Armenia as a show of support for Azerbaijan. Consequently the meeting was cancelled and then moved to Moscow, drawing harsh criticism from Armenia. After this move by Astana, the Armenian village of Harich in the country’s Shirak province decided to change the name of a local street named after Kazakhstan’s President Nursultan Nazarbayev. In a further development, on April 23, a business delegation from Kazakhstan canceled its planned participation in the "Invest Armenia–2016" forum.

In fact, this is not the first time Astana has expressed its frustration with Armenia’s occupation of Nagorno-Karabakh. At a meeting of the Supreme Eurasian Economic Council on December 24, 2013, in which Armenia’s accession to EEU was discussed with the participation of President Sargsyan, Nazarbayev demanded clarification of issues regarding the Customs Union’s borders arising in connection with Nagorno-Karabakh. He expressed concern at the lack of effective customs control between Armenia and Nagorno-Karabakh, arguing that Armenia could only be accepted based on its current internationally recognized borders.

Finally, and most importantly, Moscow’s reaction to the early April escalation also ignited Armenia’s deep mistrust of Russia. When Russia’s Prime Minister Dmitri Medvedev paid a visit to Armenia on April 7, two days after the signing of the Russian-brokered ceasefire, Armenia’s President Sargsyan and Prime Minister Hovik Abrahamian raised their concerns about Russian arms exports to Azerbaijan. Sargsyan highlighted that this has a lot of negative resonance in Armenia, since the “people of Armenia consider Russia to be our closest ally and friend.”

But despite these statements, the next day Russia’s Deputy Prime Minister Dmitry Rogozin, who is in charge of supervising the defense industry and arms exports, stated that Russia would continue to supply weapons to Azerbaijan as its strategic partner in accordance with contracts. Next week, on April 13, hundreds of Armenians marched towards the Russian embassy in Yerevan protesting against the sale of weapons to Azerbaijan, an extremely rare phenomenon on Armenia’s political scene. On April 26, CSTO Secretary General Nikolai Bordyuzha reiterated that the CSTO may provide assistance to Armenia only in case of an attack against the republic within its internationally recognized borders, while Nagorno-Karabakh is not included in CSTO obligations since it is located outside of those borders. At the end of April, in an interview with Bloomberg, Sargsyan noted the growing disappointment among the Armenian public over Russia’s “balanced” approach, which includes supplying weapons to both sides of the conflict.

As Bordyuzha emphasized, the CSTO isn’t required to support its member country in the current conflict since Nagorno-Karabakh is outside its borders and thus beyond the scope of the CSTO’s obligation. Since Nagorno-Karabakh is internationally recognized territory of Azerbaijan and this fact has previously been acknowledged by all CSTO and EEU members (except Armenia), there is no legal ground for CSTO interference. Armenia, trying to create necessary legal grounds for forcing CSTO to act “in defense of Armenia,” even intensified firing on the Azerbaijan-Armenia border in Tovuz and Gadabay regions, and in Nakhchivan. However, these efforts also failed to produce CSTO involvement.

Along with absence of legal grounds, one more factor in Armenia’s failure to gain at least the political support of its “allies” is that neither the CSTO nor the EEU is an alliance of equals. Armenia holds little political clout in terms of being able to compel the blocs, or any of its members, to take action. Azerbaijan is a much more important partner for the majority of CSTO and EEU members, while Armenia is a barely independent outpost of Russia in the South Caucasus. Russia, the alliance’s leading member, also seems to be prioritizing its relationship with Azerbaijan over supporting its small ally, Armenia. Moscow knows that Yerevan has no viable alternatives in terms of other allies upon which it can call. Thus, Russia seems certain that despite public criticism, Armenia is not going anywhere, and remains staunchly within the Russian sphere of influence. Therefore, Moscow opts to not only advocate for a cease-fire, but also to keep an evenhanded approach to Yerevan and Baku in order to preserve its prevailing influence over the Nagorno-Karabakh peace process.