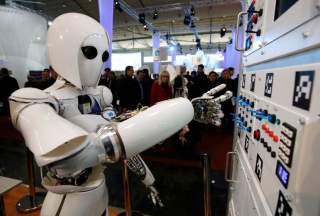 Mr. Milton Ezrati is a contributing editor at the National Interest, an affiliate of the Center for the Study of Human Capital at the University at Buffalo (SUNY), and chief economist for Vested, the New York-based communications firm. His latest book is Thirty Tomorrows: The Next Three Decades of Globalization, Demographics, and How We Will Live.

Image: The humanoid robot AILA (artificial intelligence lightweight android) operates a switchboard during a demonstration by the German research centre for artificial intelligence at the CeBit computer fair in Hanover March, 5, 2013. The biggest fair of its kind open its doors to the public on March 5 and will run till March 9, 2013. REUTERS/Fabrizio Bensch