Why Assad's Army Has Not Defected 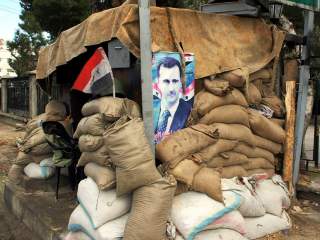 Four years ago, Turkey’s then prime minister Recep Tayyip Erdoğan said that within in a few weeks he would be praying in Damascus’s Umayyad Mosque, as Assad was about to fall. Similarly, Israel’s most decorated soldier, former Defense Minister Ehud Barak, predicted that Assad and his military would be toppled within weeks. That was at the beginning of 2012, when there were no Iranian soldiers on the ground or Russian planes in the skies.

As another round of Geneva peace talks collapses and the world wonders what’s next for Syria, it is time to begin with the warnings of Henry Kissinger and Zbignew Brzezinski. Kissinger and Brzezinski, the most seasoned and influential U.S. policymakers on the Middle East since World War II, have gone against popular opinion and stated that President Bashar al-Assad has more support than all the opposition groups combined.

It is no secret that the Saudis and Qataris, with full U.S. support, have tried to bribe some of Assad’s innermost circles to defect. The all-important professional military cadre of the Syrian Arab Army, however, has remained thoroughly loyal.

The Syrian Arab Army was mostly a conscript force with only about eighty thousand professionals in its ranks. At the start of the war, much was made of the “defections” of thousands of officers, but these were mere conscripts who never wanted to be in the army in the first place, and would also have done anything to escape conscription in peacetime. The professional ranks, meanwhile, are still very strong and religiously pluralistic. When the Syrian opposition talks about a future pluralistic Syria, they fail to realize that while they may theoretically be pluralists in Geneva, Washington and Vienna, their representatives on the ground are allied with the most sectarian terrorist groups the Middle East has ever seen.

The Syrian Arab Army has held its own for more than five years. Its numbers might have been depleted, as is normal for any wartime military, but a close glance at its military reveals that its core, perhaps unexpectedly to many, is Sunni. The current minister of defense, Fahd al-Freij, is one of the most decorated officers in Syrian military history and hails from the Sunni heartland of Hama. The two most powerful intelligence chiefs, Ali Mamlouk and Mohammad Dib Zaitoun, have remained loyal to the Syrian government—and are both Sunnis from influential families. The now-dead and dreaded strongman of Syrian intelligence, Rustom Ghazaleh, who ruled Lebanon with an iron fist, was a Sunni, and the head of the investigative branch of the political directorate, Mahmoud al-Khattib, is from an old Damascene Sunni family. Major General Ramadan Mahmoud Ramadan, commander of the Thirty-Fifth Special Forces Regiment, which is tasked with the protection of western Damascus, is another high-ranking Sunni, as is Brigadier General Jihad Mohamed Sultan, the commander of the Sixty-Fifth Brigade that guards Latakia.

The history of the Syrian Army that Hafez al-Assad built is instructive today. As president, the elder Assad brought senior members of the Syrian Air Force into the military high command. Naji Jamil (another Sunni) served as air force chief from 1970 to 1978 and was promoted to the General Staff committee overseeing defenses on the Iraqi border. Another air force commander was Muhammad al-Khuli, who until 1993 held coveted logistical positions between Damascus and Lebanon. Other prominent officers above the rank of Brigadier in military and civil defense positions post-2000 were Sunnis, including Rustom Ghazaleh, Hazem al Khadra and Deeb Zaytoun. Since 1973, the strategic tank battalions of the Seventieth Armored Brigade, stationed near al-Kiswah near Damascus, have had rank-and-file Alawis under the command of Sunni officers. As well, two of the most decorated officers who rose to be Chief of General Staff under Bashar al-Assad were Sunnis: Hassan Turkmani and Hikmat Shehabi.

From the 1970s until the 1990s, the Syrian Arab Army had a mandate to stabilize Lebanon. During these years, it worked to outmaneuver both the IDF and the U.S. Marines by supporting various proxies in Lebanon. In post-Saddam Iraq, the Americans could never understand which elements of both the Sunni and Shia insurgencies were supported by Syrian military intelligence, much of this owing to the stealth with which the Syrian Army controlled various Iraqi agents dating back to the Lebanese civil war.

The Syrian Arab Army is also the only Arab army with multiple Christians serving as generals. The most famous of these was Daoud Rajha, the Greek Orthodox army chief of staff. The two most influential Lebanese Christian leaders, now on the verge of becoming the next president of Lebanon, are Michel Aoun and Suleiman Franjieh, who are also allies of the Syrian Arab Army and President Assad. Deir al-Zour is an entirely Sunni city which has held out against ISIS encirclement for two years—and is commanded by the Druze General Issam Zahreddine.

The fact remains: The moderate Syrian opposition only exists in fancy suits in Western hotel lobbies. It has little military backing on the ground. If you want to ask why Assad is still the president of Syria, the answer is not simply Russia or Iran, but the fact that his army remains resilient and pluralistic, representing a Syria in which religion alone does not determine who rises to the top. The military also represent as challenge against the spread of terrorism, which is why three of the top British generals of the last five years have openly called for the recognition that the Syrian Arab Army, loyal to President Assad, is the only force capable of defeating ISIS and Al Qaeda in the Levant.