Why Bannon Is Right about Afghanistan 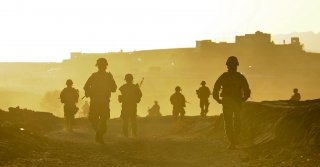 Steve Bannon is going to war. His target is national security adviser H. R. McMaster who was lanced yesterday in a piece by Bloomberg’s Eli Lake. Lake explained that Trump is disgruntled with McMaster, even yelling at him for undermining him. He further explained that the Bannon faction in the White House believes that McMaster is “trying to the trick the president into the kind of nation building that he campaigned against.” In short, Bannon is targeting McMaster because he thinks that he is counseling folly in wanting to ramp up the American presence in Afghanistan to battle the Taliban. Meanwhile, the White House says that all is peachy keen between McMaster and Trump.

Setting aside the battle for turf that is taking place—one that seems to be a constant in the Trump White House—the question remains: Is Bannon right? Or do the hawks have the solution?

The question puts Trump right back in the same spot that Barack Obama confronted, which is to say that he has to decide whether a surge makes sense in Afghanistan. Afghanistan remains a mess, with the Taliban on the march. But given the years and treasure that Washington has already expended in Afghanistan, it would seem like a tall order to make the case for going on the offensive simply to prompt the Taliban to return to the negotiating table. Indeed, it has the whiff of Vietnam all over again.

But here we are. The Washington Post reports today that the military establishment wants several thousand more troops in Afghanistan—a new surge, in other words. The problem is that it’s unclear that the first one, in which Obama ramped up forces to one hundred thousand, ever worked in the first place. That’s why Obama bailed on trying to save Afghanistan from itself, embracing a plan to slash forces to one thousand. This has the feeling of Groundhog Day.

Indeed, according to the Post, “The new strategy, which has the backing of top Cabinet officials, would authorize the Pentagon, not the White House, to set troop numbers in Afghanistan and give the military far broader authority to use airstrikes to target Taliban militants. It would also lift Obama-era restrictions that limited the mobility of U.S. military advisers on the battlefield.

“The net result of the changes would be to reverse moves by President Barack Obama to steadily limit the U.S. military role in Afghanistan, along with the risk to American troops and the cost of the war effort, more than 15 years after U.S. forces first arrived there.

“Trump is expected to make a final call on the strategy before a May 25 NATO summit in Brussels that he plans to attend.”

The temptation for Trump is obvious. For one thing, he promised during the campaign that America would start “winning again.” In fact he said Americans would get sick and tired of winning because it would occur so often. Winning would mean taking out the Taliban, not simply trying to force them back to negotiations. The restraint that Trump also touted during the campaign was always accompanied by a highly unilateral military approach to problems abroad. The contention that Trump was an isolationist was always something of a canard. He professed a desire to solve, not ignore, the problems that have vexed American foreign policy for decades.

The problem for Trump—and other American presidents—is that the American record after World War II really is a mixed bag. Uncle Sam, as the historian Richard Hofstadter once observed, has cried “uncle” more than once in foreign conflicts. The idea that might makes right and that America can smite injustice, whenever and wherever it pleases, has been a staple of conservative rhetoric for decades, but it has, more often than not, boomeranged.

Trump himself is said to be undecided on the Afghan question, but there can be no doubt that he will the decider on this one. His decision could have a lasting impact on his administration. A fiasco in Afghanistan—either in the form of big civilian casualties or a costly intervention—will further hamper his ability to promote his domestic economic agenda. The hawks, much as they were in Vietnam, seem to be stuck on autopilot. More likely than not, Trump should listen to Bannon when it comes to ramping up America’s military commitment to Afghanistan.