Why Belarus Can't Afford to Be the New Ukraine 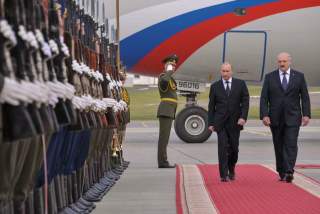 On February 3 Belarusian president Aleksandr Lukashenko launched the fiercest of his rhetorical attacks against Russia—a country that has been financially underpinning Lukashenko’s regime. Despite the audacious comments of the Belarusian leader, there is little chance that his words will convince Moscow to continue providing support to his country with few strings attached. The status quo will likely be extended, which means there will constantly be a diminishing value for Russia. Thus, Lukashenko’s options are few. Either he fully participates in Russia’s integration initiatives, or he sees his power collapsing. At this point, Moscow does not even have to make dramatic moves to rein in Lukashenko, since time is working against the Belarusian president.

Lukashenko spent several hours at his press conference listing the grievances committed by Russia. Minsk made several (mostly symbolic) moves aimed at escalating a showdown with Moscow, which included the extradition of travel blogger Alexander Lapshin, a Russian-Israeli dual citizen, to Azerbaijan. (Baku is persecuting Lapshin for visits to Nagorno-Karabakh.) Lukashenko recently skipped several summits held by various Moscow-oriented organizations about the post-Soviet space and the neverending “soap opera” surrounding the Russian military base in Belarus. Minsk and Russia were supposed to establish a Single Air Defence System, per a controversial treaty signed years ago. The establishment of that system has been delayed, and now observers have begun discussing the possibility that a full-blown crisis could explode between Moscow and Minsk. How will that crisis unfold?

The mathematics behind Russian-Belarusian relations during the last twenty years is simple. The numbers vary, but moderate estimates show that Belarus has received approximately $100 billion of various Russian investments, preferences and support. Russia’s return, on the other hand, is very limited. The country receives no significant profits from bilateral enterprises, and incurs billions of losses to its budget as a result of different schemes for importing foreign goods through Belarus. Belarusian kiwis and “Spanish” ham became the source of jokes in Russia after Belarusian entrepreneurs started supplying Western fruits and gourmet food that had been banned in Russia under the label “Made in Belarus.”

Politically, the Union State of Russia and Belarus that was formed in December 1999 never fully materialized. Furthermore, despite the geopolitical showdown between Russia and the West, Lukashenko has always adopted cautious positions, and Minsk has conducted its foreign-policy negotiations independently from Moscow. For example, Belarus has never recognized South Ossetia or Abkhazia as independent states. Belarus has also prevented its citizens from volunteering to fight for the Donetsk and Lugansk People’s Republics as a show of good will toward the new Ukrainian authorities.

At the same time, the Eurasian Economic Union, an international organization in the post-Soviet space, initiated and advanced by Russia, has been maturing. The main difference between the union and previous Russian projects is that the union is more structured. Additionally, it has clear plans and benchmarks for integration that are similar to those of the European Union. That structured integration has left little space for Lukashenko’s omnipotence and temper. The disagreements and conflicts between Minsk and Moscow have continued to multiply. After 2014, against the background of Ukrainian turmoil and a geopolitical face-off with the West, Moscow became increasingly prudent in managing its resources, including its foreign-political resources. An audit of relations with all Russian allies was on the Kremlin’s agenda. Under such circumstances, it was of no surprise that Lukashenko found himself under growing pressure to follow Moscow’s script or to defend his position.

Lukashenko chose the latter. Moscow will make the next move. Some observers predict that this move could be a very powerful one and could potentially include the forced removal of Lukashenko. Still, such drastic measures do not seem necessary. Let’s remember that, theoretically, Minsk could win a showdown with Moscow by turning from Russia to the West. However, it seems the Belarusian president passed the opportunity to make such a turn a long time ago.

At this point, it is almost impossible to predict how Lukashenko can politically survive without Moscow’s support. Belarus is often compared to Ukraine, which successfully conned Russia into believing that it participated in post-Soviet integration for years and, eventually, broke with Russia in a violent way. That comparison is valuable to the degree that it helps to understand the major differences between the two countries. First, Lukashenko has been known to the West for decades, and is known as “the Last Dictator of Europe” for a reason. He can hardly pretend to be born-again democrat, and accepting him might be very toxic for European politicians. Second, those Belarusian intellectuals in favor of turning from Russia to the West have mostly left the country and have no popular support domestically. Third, there is no popular anti-Russian movement inside Belarus. If anything, culturally and economically, the Belarusian people may be more interested in integrating with Russia than Lukashenko. Fourth, and most importantly, the Belarusian president is in a drastic need of outside support, especially cash for the struggling Belarusian economy. He needs hundreds of millions, if not billions, of dollars. There is just no source of that kind of money in the West. With everything the Trump administration has on its plate and the growing EU crisis, Lukashenko has no choice but to follow an integration scenario led by Moscow.

It is of no doubt that Belarus is important to this integration. Its educated workforce and big market are already making the Eurasian Economic Union stronger. However, considering the time pressure on Lukashenko, the Kremlin can wait until the growing economic problems make the Belarusian president more cooperative. Also notable is that the time when Russia could pretend that integration in the post-Soviet space was successful, and spend billions of dollars on declarations of friendship and festive summits, is in the past. For practical decisionmakers in Moscow, the Belarus-Russia integration, done in the right way, is seen as a means of forging economic and foreign political gains, rather than an act of charity based on nostalgia. Now, post-Soviet leaders need to choose whether or not to participate in that integration. Aleksandr Lukashenko may end up being the one with the fewest alternative options.