Why Biden Bucked the Blob on Afghanistan 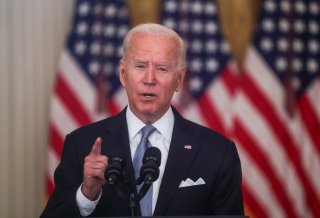 In February a congressionally appointed panel recommended that the Biden administration slow the withdrawal of troops in Afghanistan, abandon a May 1 withdrawal deadline, and instead reduce American forces further only as security conditions improved in the country. The general consensus among insiders in Washington was that incoming President Joe Biden would take advantage of the proposals made by the Afghanistan Study Group and reverse the 2020 peace agreement forged by the Trump administration. After all, the new president was considered to be a member of Washington’s foreign policy establishment, which embraced the recommendations by the commission led by Gen. Joseph F. Dunford Jr.

Dunford is a retired four-star Marine general, a former top commander in Afghanistan, and past chairman of the Joint Chiefs of Staff. Dunford stated just a few days before Biden entered office that “It’s not in anyone’s best interest right now for a precipitous withdrawal from Afghanistan.”

You didn't have to be a Machiavellian operator to figure out what was going on. U.S. generals and their echo chamber in Washington were doing a repeat performance, trying to force the hands of another president by making it close to impossible for him to end the twenty-year-long occupation of Afghanistan.

The routine was familiar: leaks to the press who quoted military and intelligence sources that depicted the nightmare scenario that would follow an American troops withdrawal from Afghanistan. These scenarios included the possible return of Al Qaeda and the ensuing 9/11 terrorist attacks. All the military needed was just a few more months and a few more troops to complete the job. Afterward, they would have to leave behind a “small” U.S. military contingency after the withdrawal as part of an insurance policy.

When pundits and analysts recycle these talking points, this kind of maneuvering can prove to be effective. It applies pressure on presidents—like Barack Obama and Donald Trump—to carry out their original plans to leave Afghanistan. It’s notable, though, that U.S. troop levels actually rose to 100,000 under Obama.

Biden dealt with foreign policy and national security issues as chairman of the Senate Foreign Relations Committee and then as vice president for several decades. Thus, it would have been difficult to deny Biden membership to the foreign policy establishment.

In fact, Biden has always tried to adjust to the changing foreign policy zeitgeist. He voted against the first Gulf War. Then, he voted in favor of the second one. Promoting engagement with China from most of the roaring globalization years and now advocating changing direction in face of the growing anti-China sentiment in Washington. So the expectation was that Biden would go along with Dunford’s recommendations.

But then, as some noted, when serving as vice president, Biden seemed to have had misgivings about the Global War on Terrorism and the two U.S. military ventures in the Greater Middle East.

Biden advised Obama against sending tens of thousands of additional U.S. troops to Afghanistan and, as the former president recalled in his memoir, he warned him that the military would maneuver him to do that. “Don’t let them jam you,” he told Obama. And that was exactly what the military did.

Defense Secretary Robert Gates, one of the deans of the foreign policy establishment, wrote in his memoir that Biden “has been wrong on nearly every foreign policy and national security issue over the last four decades.” Gates was referring to Biden’s skepticism about the never-ending military interventions in the Middle East that Gates and like-minded individuals have promoted. This included their opposition to Obama’s decision to cut a deal with Russia and refrain from using military power against the Syrian regime.

Under Trump, these interventionists had the luxury of marketing themselves as the so-called “adults in the room” who were standing up to an “isolationist” president with no grounding in foreign policy. Trump’s defense secretary, retired Gen. Jim Mattis, even resigned in protest of Trump’s decision to withdraw American forces from Syria. This move was then depicted by the foreign policy crowd as the surrender of U.S. global leadership.

The same usual suspects were outraged after Trump decided to cut a deal with the Taliban and announced a timetable for withdrawal from Afghanistan. There were threats of possible resignations in the higher echelons in protest to this move and the hope that the decisions would be reversed under a Biden.

But by resisting pressure from those who counted on him to play ball, Biden demonstrated that he intended to fulfill the pledges he had made to the American people to withdraw from Afghanistan and end the endless wars. That is the most important takeaway here. A clear majority of the American people—Republicans and Democrats—supported leaving Afghanistan and Iraq. But their ability to impact the debate on this issue has been limited in the last twenty years.

Most Americans have actually paid very little attention to what was happening in Afghanistan because they have had no stake in its outcome. As a result, those supporting the status quo in the Washington insider debate won the day—until now.

Indeed, the blow suffered by the members of the foreign policy establishment was devastating, especially since it opened the door to a wider debate about America’s interventionist policy in the Middle East.

That explains in part the hysterical reaction to Biden's move, including the reaction of policymakers who were responsible for the decisions to do nation-building in Afghanistan and the rest of the Middle East. It was these policy decisions that led to the current mess in Afghanistan, Iraq and Libya.

This is “Biden’s Chamberlin Moment,” according to the Wall Street Journal, whose editors served as cheerleaders for the endless wars. This publication, up until the last moment, was calling on Biden to maintain U.S. military presence in Afghanistan. Their advice might have led the Taliban to resume their attacks against American soldiers, which would have required deploying even more U.S. troops to the country.

It is sad that Afghanistan will once again be under the rule of a theocratic regime and that women’s rights will be snuffed out like a flame. It is unforgivable that the Biden administration failed to get out on time those Afghans who collaborated with the U.S. occupation. But why weren’t there an abundance of big headlines conveying a message of desperation and reflecting a sense of tragedy in the last twenty years after so many American soldiers and Afghan civilians were being killed fighting an unnecessary war in support of a corrupt leadership in Kabul? It is under this umbrella that trillions of U.S. dollars were poured into a dubious project. Where was the cry by the pundits to do something about that?

It is doubtful that portraying Biden as a “Chamberlin,” blaming him for what is going on in Kabul and exploiting the tragedy of the Afghan women would affect the way the American people regard his decision. It is this base from which Republicans and some Democrats who continue supporting more overseas military interventions will benefit.

Leon Hadar, geopolitical expert at RANE Network, a risk management consulting group, is the author of Sandstorm: Policy Failure in the Middle East.