Why Biden Is Just a Presidential Figurehead 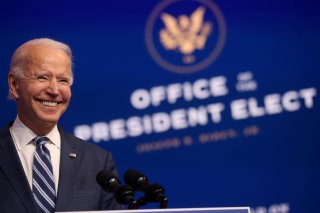 Joe Biden is in charge of nothing and probably never will be. If the media’s coronation of him as president becomes reality despite allegations of election fraud, he will still be but a figurehead for what effectively amounts to an oligarchy.

It’s useful to remember that Biden was an archetypal senator. During his career, he was never at a loss for an effusion of vapid statements and undoubtedly pronounced millions of them in a tenure that lasted nearly five decades.

Biden never really ran anything, but to the elites that are close to installing him as president, that deficiency not only isn’t a mark against him—it’s an asset. In fact, it’s his key qualification and has been since his dying primary campaign was resurrected by the elite to swindle Bernie Sanders out of the nomination again.

The method is elegant as oligarchies go and recurs throughout history. After the long tenure of Leonid Brezhnev in the Soviet Union, which lasted from 1964 until his death in 1982, the Soviet elite decided it could best run things from behind the scenes with weak time-servers as the face of the regime. It elevated the aging head of the KGB, Yuri Andropov, to the job until he died two years later. Undeterred, that elite then installed the even-more-fragile Konstantin Chernenko, who at times literally had to be propped up, until he died after a year in office. George H. W. Bush, then vice president and therefore the de facto funeral-attender for President Ronald Reagan, is rumored to have joked to the U.S. embassy staff upon departing that he would see them “same time, same place” next year. People know when an ailing figurehead represents an ailing regime.

No one should doubt that our oligarchs, reeling from their brush with exposure and destruction since Donald Trump’s election in 2016, are attempting much the same feat as the old Soviet elite.

Biden, soon to be age seventy-eight, is the oldest person set to become president and the most unfit. Even William Henry Harrison, who died a month into his presidency, started much stronger. Those who knew Biden in the Senate suggest that his mental and physical conditions have noticeably eroded. He campaigned less than anyone in modern history, leaving most of the work to his media handmaidens.

It remains unexplored and unexplained why his family pushed him to add still more of his remaining time to an already-decades-long tenure in Washington. Presumably, a more with-it Biden would not have allowed his son, Hunter, to peddle the family name and access to himself in places like China and Ukraine—the germ of a scandal that may soon consume a good deal of Biden’s dwindling energy.

With Biden in his dotage, people are scrambling to learn who the real power will be in a titular Biden administration. Customarily, this can be discerned by who is rumored or named to prominent positions at the White House and various agencies. In turn, one can usually infer from staff choices what the priorities and ideological leanings of a new administration will be.

It is less so with Biden. Certainly, some of the names bandied about are regarded by analysts as closer to the Barack Obama or Hillary Clinton tribes in the party, but the trajectory of the administration seems similar regardless of which names go in which boxes. The reason is that the oligarchy’s path is set and its interests will be maintained.

Wall Street and big tech might get a talking to by Democrats like Elizabeth Warren, but the poses that be will make sure nothing too drastic will get in the way of these important Democrat constituencies. Notwithstanding homages to Scranton, where you may have heard Biden came from before decamping to Delaware, what’s left of manufacturing will resume being exported to China as the administration does away with Trump’s tariffs.

Similarly, blue-collar jobs tied to the oil and gas renaissance of recent years will also go. They are inconsistent with its secular religion of climate change, to be replaced by Green New Deal jobs. If those displaced workers don’t want to move to the coasts and learn to code, then that’s okay: the regnant elite prefers those jobs for its progeny. Meanwhile the unemployed in flyover country can content themselves with a fentanyl addiction and a disability check—safely shuffled back into the shadows after a bit too much inconvenient attention these past four years.

Sure the 2020 elections were about Trump and Biden. But the real issue at stake was whether a left-wing elite accustomed to getting its way—and which runs media, tech, academia, Hollywood, the deep state, and Wall Street—would return to smooth sailing. That ugly and otherwise-incompetent elite is happy to prop up an old man as its face, and even start him off early with a cute podium labeled with the make-believe “Office of the President-elect.” But there should be little doubt of who is in charge, and it isn’t Joe Biden.