Why Biden Must Keep a Close Eye on Kazakhstan 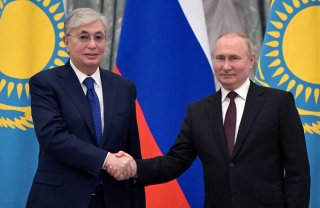 For the past several weeks, all eyes have been on Ukraine, as Russian president Vladimir Putin prepared for and launched a full-scale invasion against a sovereign nation. This was not a surprise, considering NATO leaders, President Joe Biden especially, have been ignoring indications and warnings that were coming out of Moscow. Putin repeatedly expressed his hostility toward NATO’s intent to enlarge itself on Russia’s border.

While Putin’s actions are totally unacceptable, Western leaders, who are now in shock, must accept the fact that their failures contributed to this situation. The fact is, we are now living with the consequences of a European crisis that could have been averted.

Ukraine’s unfolding situation should be considered in the context of recent experiences in the neighborhood. This includes not just the color revolutions from 2003-2005, but also more recent unrest in Belarus, and in particular, Kazakhstan. Located in Central Asia, with Russia to the north and China to the east, the former Soviet nation has rarely seen such public expressions of discontent in the streets.

In early January of this year, protests which began over a sudden increase in gas prices and employment conditions spiraled into nationwide rallies and then violent riots. The worst events took place in the city of Almaty, where 227 people were killed and over 9,900 were arrested, prompting a brief deployment of Russian troops under the Collective Security Treaty Organization (CSTO).

As calm has largely been restored to the country, Kazakh president Kassym-Jomart Tokayev has made numerous changes to the power structures within the ruling elite that have raised many questions, concerns, and discontent.

Most of the attention has centered around Tokayev’s move to assume the chairmanship of the National Security Council, replacing former President Nursultan Nazarbayev, whose lingering influence over the country’s economy was a focus of outrage by the protesters.

Since then, there have been removals of three of the former president’s sons-in-law from state companies, the firing of his nephew, and the arrest on treason charges of the former spy chief, Karim Masimov. Many other senior officials and members of the business elite associated with Nazarbayev have now lost their positions, fled abroad for “extended vacations,” or been coerced to make hefty “donations” to the state.

Government shakeups and old guard removals do not always equate to reform. Too often the results are removing previous administration loyalists and relatives in favor of equally ineffective replacements.

Erzhan Kazykhanov’s appointment to the highly influential position of Tokayev’s deputy chief of staff is counter-productive; Kazykhanov was the all-time least effective Kazakh ambassador to the United States.

During his tenure in Washington from 2017-2021, Kazykhanov (whose surname is also often spelled “Kazakhan”) developed a reputation as an aloof and arrogant diplomat, overly self-confident and often out of touch with the sensitivities concerning his country’s image abroad. His record certainly isn’t impressive, as he failed to make any progress on important issues of national interest, such as the continuing existence of Jackson-Vanick restrictions or other questions related to Kazakhstan’s global reputation.

Kazykhanov’s troublesome and prickly reputation makes him an unlikely candidate for any position of critical importance. A competent deputy chief of staff requires the skill of diplomacy and a high level of general competence, neither of which are Kazykhanov’s strong suits. Flaunting his weaknesses, Kazykhanov has been visible on major international news networks, granting interviews that have made even the most ardent supporters of Kazakhstan uncomfortable.

Tokayev’s reforms in Kazakhstan resemble many of Mikhail Gorbachev’s glasnost (openness) and perestroika (restructuring) initiatives in the Soviet Union. These reforms greatly contributed to the fall of the Soviet Union, exactly what Putin is trying to rebuild. Tokayev has also worked on economic relationships with countries that surround his own and with the West. He has been very careful not to incur Putin’s wrath, but rather to sustain the Russian strongman’s support. Kazykhanov has the potential to undermine that delicate balance.

As war rages on in Ukraine, Washington should watch events in Kazakhstan very closely, as they represent a forecast of the many possible scenarios—both good and bad—that can take place in a power succession in this area of the world.

Colonel Wes Martin (ret) worked directly with the Soviet military while in the Berlin Brigade and decades later with the Ukrainian military in Iraq.