Why Biden Must Support the International Criminal Court 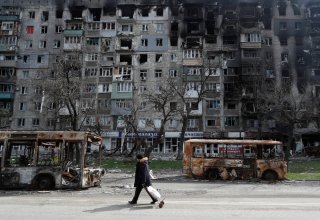 As the atrocities in the current Ukraine crisis continue to unfold, the Biden administration has announced its support of the International Criminal Court’s (ICC) investigations of possible war crimes committed by Russia in Ukraine. Various news reports maintain that U.S. officials are further conducting internal reviews to determine if its oratory support to the ICC can widen to other intrinsic tangible support. While it is unclear whether U.S. support of ICC investigations into war crimes in Ukraine will help deter Russian armed forces from committing war crimes and crimes against humanity, these were the very goals for which the ICC was founded. However, what is profoundly troubling is the hypocrisy of the U.S. relationship with the ICC, which not only degrades America’s moral standing in the world but also diminishes and paralyzes the ICC. Washington should instead support the ICC by recognizing, ratifying, and promoting the Rome Statute, the treaty which established the court in 1998.

The United States has consistently undermined the Hague-based ICC since its founding. In 2002, President George W. Bush withdrew from the ICC, and the U.S. Congress passed the American Service Members Protection Act (ASPA), which Bush signed into law. ASPA not only bars U.S. federal, state, and local governments from cooperating with the ICC, as well as barring extradition of any person from the United States to the ICC, but it also forbids American military aid to be sent to state parties of the ICC unless they promise they will never extradite a U.S. person to the court. The act clearly states that the president is, “authorized to use all means necessary,” to liberate a U.S. person or friends of the United States from detention by the ICC.

The Trump administration went even further by sanctioning ICC personnel and their family members, banning them from obtaining visas, and freezing their assets. The United States then placed two top ICC officials, including its chief prosecutor on the Treasury Department’s “Specially Designated Nationals” list, which is meant for criminals such as terrorists. The United States further threatened to identify and sanction other ICC personnel if they investigated U.S. persons for incidents of war crimes in Afghanistan.

While Republican presidents have waged a full-blown crusade against the ICC, Democrats have not done much better. On the positive side, President Barack Obama referred Libya and Syria for prosecution to the ICC and also assisted the ICC in arresting and prosecuting two African war criminals, Bosco Ntaganda and Dominic Ongwen. However, the Obama administration also did everything in its capacity to immunize members of U.S. forces even if they committed similar atrocities.

The Biden administration is borrowing from Obama’s playbook. Three months after the inauguration, responding to severe criticism, the Biden administration, in April 2021, lifted Trump-era American sanctions on ICC personnel. However, even then, Secretary of State Antony Blinken reiterated the U.S. claim that the ICC does not have jurisdiction to prosecute incidents that occurred in Afghanistan and Palestine, even though international human rights groups, such as Human Rights Watch, support the ICC investigation of those alleged war crimes. On the other hand, earlier that year in March, Blinken told the House Foreign Affairs Committee that the Biden administration seeks a “productive relationship” with the ICC. Recently U.S. ambassador to the United Nations Linda Thomas-Greenfield said regarding Ukraine, “While … we’re not a member of the Criminal Court, we’ve always been supportive of the Criminal Court taking actions when actions are required.” Thomas-Greenfield sums up the Democrats’ approach to the court: America will support the ICC’s proceedings of America’s foes but will oppose the court taking action against Americans and their allies. Such a hypocritical approach to the court employed by Democrats only diminishes the ICC regime.

The ICC is already facing a crisis of trust and has alienated many of its initial supporters who have criticized the court for prosecuting only African cases. Many critics have nicknamed the ICC the “African Criminal Court” for disproportionately investigating and prosecuting cases from the African continent. Further fueling this narrative is the fact that the ICC has dropped any investigations concerning the United States’ actions in Afghanistan, reinforcing the claims of critics that the ICC is nothing more than the continuation of the West’s domination over the rest of the world.

While Democrats still control Congress, President Joe Biden should take bold action to support the ICC by amending the U.S. Federal Criminal Code and the Uniform Code of Military Justice to conform with the Rome Statute and ensure U.S. laws criminalize actions that are crimes under it. As per many legal experts, doing so will create sufficient space within U.S. law to prosecute any potential Rome Statute crimes. This will also internationalize U.S. criminal law in par with internationally-accepted standards. Internationalizing the criminal justice system of its member states was also one of the founding aspirations of the Rome Statute. Biden should also work with U.S. allies to encourage their own ratification of the Rome Statute.

Moreover, Washington should have stated policy to assist the ICC in chasing and prosecuting individuals charged with ICC crimes by employing various means such as the War Crimes Rewards Program. With Washington on board and with the Rome Statute heading toward global ratification, the ICC’s ability to get things done will be dramatically enhanced. This may also put Moscow and Beijing in a difficult situation, as the ICC will have jurisdiction over situations involving Russian or Chinese nationals if they conduct ICC crimes in the territories of ICC member states.

When signing the Rome Statute on December 31, 2000, President Clinton stated that:

The United States has a long history of commitment to the principle of accountability, from our involvement in the Nuremberg tribunals that brought Nazi war criminals to justice, to our leadership in the effort to establish the International Criminal Tribunals for the Former Yugoslavia and Rwanda. Our action today sustains that tradition of moral leadership.

With Ukraine currently fighting for its right to merely exist against a Russian aggressor most likely committing war crimes and crimes against humanity at a dizzying clip, it is imperative, now more than ever, that Biden work to continue “that tradition of moral leadership.” The United States has an opportunity to take a giant step forward to promote justice around the world and, in Biden’s own words, to “restore the soul of America.”

Sumesh Shiwakoty is a policy analyst and commentator. His analyses have appeared in publications including The National Interest, The Diplomat, Asia Times, and The Times of India. He has previously worked with the Center for Constitutional Rights in New York and has received a research grant from the Andrew W. Mellon Foundation. He currently serves as a board member and South Asia director for the California-based U.S. Department of State-funded non-profit, United by Love.