Why Biden Is Pushing for Arms Control With Russia 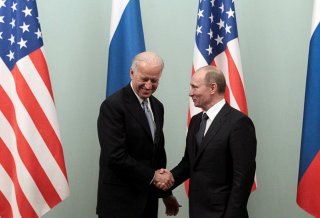 President Joe Biden will reportedly seek a five-year extension of the New START nuclear arms treaty with Russia, a move that is being welcomed by the Kremlin. Dmitry Peskov, a spokesman for Russian President Vladimir Putin, explained that “we can only welcome political will to extend the document.” He was careful to offer the caveat, “all will depend on the details of the proposal.”

But tensions between Washington and Moscow remain. The Biden administration will approach Moscow about a five-year renewal of New START, the sole remaining nuclear arms treaty between the US and Russia. The Washington Post reported that senior officials emphasized that the prospective extension of New START is not to be conflated with the Biden’s administration’s desire for a broader “reset” in relations between Washington and Moscow, making the Biden White House the first post-Cold War administration that did not explicitly work to improve ties between Russia and the United States.

The extension of New START is crucial, argue these officials, precisely because the relationship with Russia is “adversarial”— without it, there will no longer be any mutually agreed upon restraints on a full-scale nuclear arms race between the two countries. The treaty “provides limits on Russia’s nuclear program, gives us information about Russia’s nuclear arsenal, and provides us with access to Russian nuclear facilities,” according to an internal State Department memo obtained by NBC News. That same memo added that the Biden administration “will work in close consultation with our Allies and partners to hold Russia to account for its reckless and aggressive actions.”

Biden’s push for a full five-year extension—the maximum renewal period allowed under New START’s provisions—marks a sharp departure from the Trump administration’s policy approach. Biden’s predecessor preferred a short-term extension of the treaty, while also pushing for changes to its verification mechanisms and lobbying for a new nuclear arms treaty format that includes the United States, Russia, and China. The Kremlin consistently rejected Trump’s efforts to bring China into a new trilateral format, with Foreign Minister Sergei Lavrov calling it an “open provocation,” and has instead advocated for New START’s renewal without any preconditions. There is also the matter of Russia’s latest nuclear weapons and delivery systems—in particular, the RS-28 Sarmat heavy intercontinental ballistic missile (ICBM) and Avangard hypersonic glide vehicle. Earlier last year, Deputy Foreign Minister Sergei Ryabkov indicated that both weapons could be counted under New START.

Trump was not alone in suggesting modifications to New START. Victoria Nuland, an Obama veteran tapped by Biden to serve as undersecretary of state for political affairs, made a similar appeal in the summer of 2020: “Washington should not grant Moscow what it wants most: a free rollover of New START without any negotiations to address Russia’s recent investments in short- and medium-range nuclear weapons systems and new conventional weapons.”

Biden is not following her advice. Biden’s offer of an unconditional extension for the maximum allotted period of five years is exactly what the Kremlin wanted, and has been unable to get, from the Trump administration. Moscow has reacted with tepid optimism to Biden’s intention to renew New START: “Russia without doubt supports preservation and extension of the START treaty in order to get a certain time lag to carry out all the necessary negotiations and contacts,” said Russian President Vladimir Putin’s spokesperson Dmitriy Peskov in a call with reporters late this week. Peskov reiterated that Moscow is waiting to see a formal proposal from Washington: “Certain conditions for the extension have been put forward, and some of them have been absolutely unacceptable for us, so let’s see first what the U.S. is offering.”

The survival of New START, which is set to expire on February 5, will be the first test of Biden’s emergent Russia strategy: working with Moscow where specific US interests permit it, while at the same time confronting and deterring the Kremlin across a wide range of economic, diplomatic, and military fronts. White House press secretary Jen Psaki rearticulated this approach at a recent press briefing. Psaki posited that “New START is the only remaining treaty constraining Russian nuclear forces and is an anchor of strategic stability between our two countries,” shortly before listing the areas of ongoing confrontation between Washington and Moscow: “Even as we work with Russia to advance U.S. interests, so too we work to hold Russia to account for its reckless and adversarial actions. And to this end, the President is also issuing a tasking to the intelligence community for its full assessment of the SolarWinds cyber breach, Russian interference in the 2020 election, its use of chemical weapons against opposition leader Alexei Navalny, and the alleged bounties on U.S. soldiers in Afghanistan.”

These initial points of contention are part of what the Biden team calls a larger “cost imposition strategy” that will involve further sanctions and cyber capabilities, among other tools. Can the Biden administration successfully work with Russia in a few select areas while at the same time pursuing a comprehensive policy of rollback against Moscow?