Why Biden Should Extend Vaccine Diplomacy to Sanctioned States Like Venezuela, Iran, and North Korea 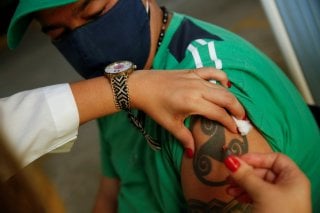 While the United States focused all its resources on domestic vaccine production and distribution, both Beijing and Moscow began shipping their own vaccines abroad. A strengthened coalition of heavily sanctioned states could provide Beijing and Moscow with more opportunities to undermine important U.S. foreign policy objectives, including denuclearization deals with North Korea and Iran and restoring democracy in Venezuela. As a leading nation in domestic vaccine distribution, the United States can help alleviate COVID-19-related human suffering abroad and chip away at growing Chinese and Russian influence in sanctioned countries through vaccine diplomacy.

Over the last four years, the United States has imposed a series of harsh unilateral sanctions on Venezuela, Iran, and North Korea. During this time, Beijing and Moscow have been offering economic lifelines, surveillance technology, and military training programs to these countries in defiance of U.S. sanctions. The ongoing COVID-19 pandemic also provided Beijing and Moscow with an opportunity to expand their influence abroad through vaccine diplomacy, particularly given the challenges current U.S. sanctions regimes present to sustained humanitarian assistance from the United States. China and Russia have already shaped the narrative on vaccination in Iran through state-controlled social media accounts and government initiatives in an attempt to discredit U.S. and UK vaccines. Reports also claim that China allegedly provided North Korean leader, Kim Jong Un, and several senior-level officials, with an experimental Chinese vaccine in 2020, but some question whether Kim would take such a risk given his known pre-existing health issues.

Beyond Iran and North Korea, the Biden administration should also pay attention to growing Chinese and Russian influence in Venezuela during the pandemic. Current Venezuelan leader, Nicolás Maduro, is struggling to secure enough vaccines for the country of around 30 million people. On top of the original 500,000 doses, Beijing recently decided to ship an additional 1.3 million Chinese vaccines to Caracas. Venezuela has also strengthened diplomatic engagement with Russia to discuss vaccine distribution in response to “the scheme of coercive and unilateral measures imposed by the U.S. government against our [Venezuela] country.” While cooperation among heavily sanctioned countries to evade sanctions is not new, the rising global influence of China and Russia adds a new threat variable to the equation. Distributing U.S. vaccines to these countries won’t be easy as current sanctions regimes and political scrutiny will make distribution challenging, but it may be one of the only current tools to chip away at growing dependency on China and Russia during the pandemic.

A key issue is that heavily sanctioned countries are usually exempt from receiving sustained U.S. humanitarian aid due to sanctions and restrictions on trade. Although the Biden administration recently unveiled its global vaccine distribution strategy for the first 25 million of 80 million doses designated for foreign countries, it failed to mention Venezuela, Iran, and North Korea as recipients of U.S. vaccines or humanitarian supplies. As a result, China, in particular, is still one step ahead of the United States. In early June, the World Health Organization (WHO) approved China’s second vaccine, Sinovac, for emergency use which opens the door for additional overseas administration through COVAX. In order to strengthen global efforts against the ongoing pandemic and growing Chinese-Russian influence abroad in heavily sanctioned countries, U.S. policymakers should pursue temporary diplomatic engagement and revise current sanctions regimes to allow the distribution of humanitarian aid and pandemic-related supplies to Venezuela, Iran, and North Korea.

The U.S. Department of the Treasury holds the key to a successful vaccine diplomacy strategy geared towards heavily sanctioned countries. For example, the Treasury can significantly expand sanctions exemptions for humanitarian aid-related items and publish additional FAQs outlining how financial institutions, pharmaceutical companies, and NGOs can provide services to Caracas, Tehran, and Pyongyang without violating U.S. sanctions. Similar to the United Nations Security Council’s recent decision to allow the Singapore Red Cross to operate inside North Korea, the Biden administration can offer and expand sanctions exemptions for humanitarian aid organizations attempting to supply COVID-19 testing kits and related items to local hospitals in sanctioned countries. Although still allegedly negotiating with COVAX and the WHO, North Korea has yet to confirm receipt of vaccines for COVID-19. Often overlooked, heavily sanctioned countries like North Korea lack the necessary technology and facilities to keep certain vaccines at a proper temperature for safe storage and distribution. Compared to the Pfizer and Moderna vaccines that require “ultra-cold chain storage,” the AstraZeneca vaccine can be safely stored at normal refrigeration temperatures which would facilitate easier distribution within countries with struggling healthcare systems. Expanding humanitarian aid-related sanctions exemptions for financial institutions, pharmaceutical companies, and NGOs can be a short-term solution to this problem.

New sanctions exemptions should also include expanding existing general licenses and issuing new waivers to authorize activities and transactions involving necessary materials and funds for medicine, food, and COVID-19-related supplies. The Treasury already began updating its FAQ section with a new disclaimer on providing humanitarian assistance to Syria in April 2021, but has yet to issue any public updates on aid or relief to Venezuela, Iran, and North Korea. However, the Treasury’s Office of Foreign Assets Control (OFAC) recently issued a Venezuela-related General License 8H to authorize transactions involving Petróleos de Venezuela, S.A. (PdVSA), Venezuela’s state-owned oil and natural gas company, necessary for the “limited maintenance of essential operations in Venezuela.” Although not directly related to increased humanitarian aid, this decision demonstrates the U.S. government’s interest in revising sanctions programs and offering options for stakeholders to legally interact with sanctioned entities. Extending vaccine diplomacy to heavily sanctioned countries will allow Washington to both hedge against growing Chinese-Russian influence abroad and help alleviate global human suffering, but the Biden administration must act quickly.

Jason Bartlett is a Research Assistant for the Energy, Economics, and Security Program at the Center for a New American Security. He tweets @jasonabartlett