Why Biden Should Give Diplomacy With Russia a Chance 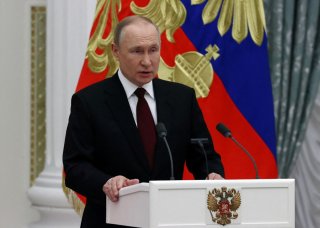 Confronted with both tactical issues on the ground in Donbas and broader strategic and geopolitical issues involving China and Russia, the Biden administration must think carefully and respond with a proper combination of strength, determination, pragmatism, and flexibility. To underscore America’s commitment to Ukraine and to the NATO alliance more broadly, it makes sense for the administration to provide greater military assistance to Ukraine and to send additional U.S. troops to Central Europe. It makes no sense at all, however, to allow NATO’s transfer of lethal weapons to the frontlines in Donbas, and particularly to units not tightly controlled by Kyiv. Increasing the size of NATO’s footprint in the Baltic states is also highly problematic. Certainly, during the Cold War, NATO’s relatively small presence in West Berlin exerted a strong trip-wire effect on the Soviet Union. Today, however, sending more weapons and NATO troops to the Baltic states—particularly Estonia, given its proximity to St. Petersburg—would be reckless. Since recognizing their independence in the early 1990s, Russia has never threatened the Baltic states. Turning them now into military assets against Russia will inevitably, and unnecessarily, place them in Moscow’s crosshairs. NATO enlargement was supposed to contribute to the security of the alliance at large, and especially of its new member states. To argue that today’s situation contributes to Estonia’s security would require a fanciful imagination indeed.

The Biden administration must provide leadership in addressing Russian demands, including Moscow’s call for a formal treaty that precludes Ukrainian and Georgian NATO membership. So far, Washington’s response to this demand has been unequivocal: “it cannot be done.” But Washington never really explains why. Following the Soviet Union’s collapse, NATO expansion never offered a self-evident contribution to American security. As early as 1997, George F. Kennan warned that expanding NATO would be “the most fateful error of American policy in the entire post-Cold War era.” History, unfortunately, has more than vindicated Kennan’s prediction.

Just as Kennan foretold, NATO expansion enthusiasts now portray the growing crisis with Russia as evidence that they were right all along. “Of course there is going to be a bad reaction from Russia,” Kennan warned, “and then [the NATO expanders] will say that we always told you that is how the Russians are—but this is just wrong.” For many in Washington, commitment to NATO enlargement has become a litmus test of patriotism and superpower manhood.

This obsessive commitment to Ukraine is precisely the kind of entangling alliance that George Washington warned against in his farewell address: “Excessive partiality for one foreign nation and excessive dislike of another cause those whom they actuate to see danger only on one side, and serve to veil and even second the arts of influence on the other. Real patriots who may resist the intrigues of the favorite are liable to become suspected and odious, while its tools and dupes usurp the applause and confidence of the people, to surrender their interests.”

Quite revealingly, White House press secretary Jen Psaki has attacked sitting U.S. senators as Putin’s puppets simply because they acknowledge limits to American interests in Ukraine. By this preposterous standard, many senators from the past such as J. William Fulbright who warned of the limits of American power were also tools of the Kremlin. While Psaki issues these attacks supposedly in the name of bipartisan values, her kind of “bipartisanship” is the same kind once practiced by Senator Joe McCarthy. McCarthyism ultimately did not last long, having been properly denounced as un-American in the U.S. Senate and in public opinion.

So how can we try to reach a deal with Russia without sacrificing U.S. credibility and rejecting the aspirations of qualified countries in Eastern Europe?

Some experts argue that NATO should recognize the neutrality of Ukraine and Georgia, modeled upon Austrian and Finnish neutrality in the Cold War. But these suggestions are unrealistic. Austria and Finland decided on their own to settle for neutrality because they were both defeated powers in World War II (Austria as a former part of the German Reich); Soviet troops stood on their territory. To end the Soviet presence, neutrality became a positive step toward independence. Today, neither Ukraine nor Georgia is in a similar position. For NATO to simply accept their neutrality and say “never ever” to their membership aspirations would be contrary to the mission of the alliance.

It would be perfectly appropriate, however, to at least acknowledge the truth: that neither Ukraine nor Georgia are ready for NATO membership by any objective criteria, and that it will take years before they can realistically expect to join the alliance. The United States has already said as much to Moscow, and there is no reason now not to seek a diplomatic formula that could put this self-evident reality into some kind of document. Moscow’s initial response would no doubt be lukewarm. If presented, however, with a manifestation of Western strength and unity, but also a serious proposal making clear to Moscow that it has to choose between such a compromise or nothing, Putin would probably give it serious consideration. At a minimum, as the United States hopes, he may be prepared to deescalate the current crisis and give diplomacy a chance. It is worth trying to find out rather than embarking upon a dangerous course of escalation that could result in open-ended conflict with a major nuclear power.