Why Bill Clinton Is Right About Black Lives Matter 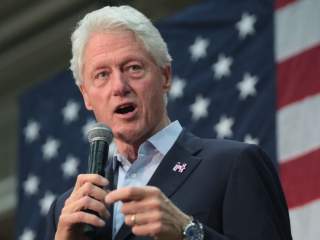 “What about black-on-black crime?”

If you look around in the last few years, you’re unlikely to see this sentence in respectable liberal circles (or what’s left of the respectable conservative sphere). That’s because it’s been deliberately erased—written off as a victim-blaming rhetorical device to disempower blacks and to distract from systemic racism. It’s become the equivalent of saying, “she deserved to be raped, because she drank and went home with that guy.” It’s a hermetically sealed, anachronistic term that will get you slapped with the dreaded label—racist—and thus has largely disappeared from public discourse.

Yesterday, it was brought back by a Democrat.

Bill Clinton was stumping for Hillary yesterday and in the face of Black Lives Matter protesters heckling him, he doubled down. It was a moment of 90s nostalgia; for a fleeting few seconds I forgot Hillary was running. The man has a way of getting his point across that Hillary just doesn’t; his earnestness and talent outshine anyone on the field, Democrat or Republican. He has the perfect personality to get people to listen, a sorely lacking quality that is becoming the status quo. Slate writer Michelle Goldberg said that he is a liability and should be fired, claiming that Bill Clinton “yoked [Hillary] to his own discredited policies”—as though Hillary were some helpless creature who had no choice but to depend on Bill for his support. He’s barely made a blip on the campaign’s radar.

The Clintons’ 1994 crime reform bill has been a particular target of Black Lives Matter this election season. Hillary apologized after a protester confronted her about Hillary’s term “superpredator”, purportedly painting black criminals as animals that need to be “brought to heel”. But Bill Clinton didn't roll over as easily as his wife did. In his classically cheeky style, he said, “I almost apologize.”

“I like protesters,” Clinton said in a video released by CNN that recorded some of the exchange between him and the protesters. “But the ones who won’t let you answer are afraid of the truth.” The truth that Clinton brought to light was that internal violence in black communities—drugs, gangs, and violence—are more fatal to black lives than police shootings. This stance is extremely unpopular in today’s political climate, especially as Bernie and Hillary compete for the black vote.

Racism and black-on-black crime exist simultaneously, and influence each other. To borrow a beloved liberal word, they’re likely intersectional. Yet they remain separate in the public narrative about black suffering. Black Lives Matter activists are now shaping public discourse that in an effort to silence and publicly shame those who they disagree with, and their tactics are working. A Black Lives Matter protestor went on CNN this morning to say black-on-black was a “myth” because “any Google search of the term comes up with a lot of different articles”. Does he not know what a myth is? Does he not realize the ideology he’s spewing resembles more of a myth each day as it divorces fact from feelings? At the rate this election is going, people will be interrogated about their privilege as they were during the red scare.

This is the election cycle where the persecuted are persecuting. Revising history, censoring speech, and attempts at public humiliation augur what could come in the months following a presidential election: a civil society whose default is protest and aggressively seeks out enemies. No group of people should be called superpredators or thugs. But no one should be afraid to speak the truth, either.