Why Black Lives Matter Is in Trouble 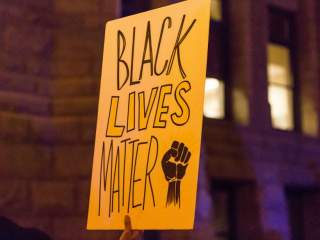 The end is nigh for #BlackLivesMatter—and its leadership doesn’t even see it yet.

DeRay Mckesson announced last week in a soporific Medium post that he is running for mayor of Baltimore, and the general response has been a collective cringe. Mckesson is one of the Black Lives Matter activists with the most promise, but by attempting to leverage a social movement into a political force for good, he’s likely headed for trouble.

Mckesson survived the December Twitter fracas after Black Lives Matter cofounder, New York Daily News “social justice” columnist and erstwhile fundraiser Shaun King could not account for hundreds of thousands of dollars raised via social media platforms on behalf of Haitian earthquake victims and black victims of gun violence. Apparently King’s incompetence extended to his latest failed venture, the pseudo-nonprofit Justice Together. After King could not account for the organization’s funds, board members, including Mckesson, resigned while accusing King of gross mismanagement.

King is permanently tainted by scandal and has reached his ceiling of political influence. He will finish his career by being a resource to mine for the odd sympathetic journalist looking for her big reporting break on the next Sandra Bland story. Mckesson was smart to cut ties, but his next move—running for mayor—suggests he is running from the frying pan into the fire. King may already know what Mckesson is about to find out—that one cannot cash in Twitter followers for long-lasting social change.

As Kevin D. Williamson notes in National Review, “DeRay Mckesson is a fool and a miscreant, one of the sanctimonious and self-aggrandizing activists making a career out of the Black Lives Matter protests, and he has announced that he is running for mayor of Baltimore, the troubled city from which he originally hails.” Williamson argues that Mckesson should win the mayoralty precisely because he cannot make things in Baltimore any worse than they already are. This is a dangerous position to take. If Shaun King and others like him are any indication of the damage activists can do when they are in charge, then Williamson should take the conventional conservative view of telling Mckesson to step away from the next bleeding-heart project before he ruins a suffering city.

Indeed, mainstream conservatives are not the only ones suggesting that activists make terrible leaders. Last October, Members of the Caucus of Working Educators Racial Justice Committee published an open letter in Jacobin magazine, offering constructive but no less thorough criticism of Mckesson’s association with Teach For America, a nonprofit that plucks naïve college graduates from their manicured campuses and thrusts them into high-need inner city and rural schools in the name of social justice and—wait for it—equality. I’ve heard many private horror stories (some of which are now public) of TFA teachers with the best intentions who experienced poverty for the first time and were wholly unprepared to deal with issues such as teenage pregnancy, severe behavioral problems and academic unpreparedness. The open letter makes no argument against TFA that hasn’t already been made many times by seasoned educators:

“Rather than hiring experienced professionals that will stay in the profession for a long period of time, Teach For America hires individuals with little or no experience in classroom settings via external channels such as private universities and corporately sponsored recruitment. Teach For America and charter schools both represent a failure of public leadership to lead and create change in our public schools, and prioritize outsourcing teaching and school governance over public responsibility to realize every student’s right to a fully funded, culturally relevant education in their neighborhood.”

In spite of this, Mckesson continues to proudly display his TFA credentials on his Twitter profile and in his public bio.

I feel I’m somewhat qualified to speak about the source of Mckesson’s political motivations. Mckesson and I both graduated from respectable northeastern liberal arts colleges (he from Bowdoin, I from Wesleyan) within a few years of each other. If you’re a student of color at an elite institution, you’re fed a distinct narrative: beat your plowshare of a liberal arts degree into a sword for equality. Usually some form of public protest of inequality is expected. I know those who have gone this route, and it can be challenging, thankless work. It’s not the work of an activist; it’s the work of a dedicated professional who spends the time to get the credentials and training to serve high-need communities. Mckesson’s blisteringly obvious observation that Baltimore needs help is correct, but he’s not going back to school to earn a doctorate in education policy or trying to overhaul the Baltimore public school system. These are logical, laudable goals for a young activist looking to make a real impact—the supposed path of being a human capital director and a proud TFA alum.

The activist’s limelight is seductive, and the lure to maintain prominence is powerful. But if absolute power corrupts absolutely, then power gotten too soon may be an absolute disaster for the residents of Baltimore.