Why Bombing to Win in Iraq Will Fail 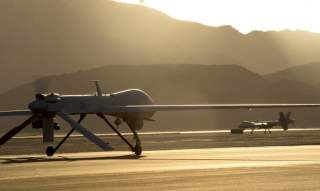 In a sun-drenched Rose Garden address the day rebels assassinated Libyan dictator Muammar Gaddafi in October 2011, President Barack Obama touted the successes of the NATO-led air campaign that achieved its objectives “without putting a single U.S. service member on the ground.”

Three years after what one Obama adviser celebrated as a successful illustration of the president’s preference for “leading from behind,” Tripoli’s short-lived democratic regime has returned to the hands of Gaddafi loyalists and begun brutal crackdowns as the nation became overrun by extremists who successfully stormed a U.S. compound in Benghazi on September 11, 2012, and killed four Americans, including one of the nation’s most distinguished diplomats.

This fate will befall Iraq if President Obama believes that America’s presence in Baghdad can be limited to “targeted” air strikes against carefully selected affiliates of the Islamic State of Iraq and the Levant (ISIL), a protomilitary terrorist organization, whose cunning strategy and brutal tactics are so vile that even Al Qaeda refuses to affiliate itself with its leader, Abu Bakr al-Baghdadi.

History has consistently demonstrated that relying on air power alone ensures that American military campaigns not only fail to accomplish their strategic objectives, but ultimately prove counterproductive in complex operational environments like the one confronting the U.S. military advisors deployed to Iraq in June.

In Bombing to Win—the often overlooked but equally compelling predecessor to Dying to Win, his assessment of the strategic logic of suicide terrorism—distinguished University of Chicago political scientist Robert Pape conducts a systematic examination of nearly every American bombing campaign since the advent of air power and concludes that a near-exclusive reliance on aerial bombing in the absence of other elements of military force may generate short-term tactical gains, but ultimately secures few sustainable strategic successes.

The 1999 American air campaign in Kosovo is just one case in point. Often praised as a successful military operation conducted solely from the skies, General Wesley Clark, the top military commander in charge of the operation, suggests in his memoir it was the threat of a ground invasion from Russia that likely forced Slobodan Milosevic’s hand in surrendering at least as much as NATO’s coercive air campaign, which had stretched on for seventy-eight days by the end of major combat operations in Yugoslavia.

In Iraq, air strikes alone—no matter how carefully selected the targets and how precisely guided the missiles—hazard enormous risks that could hand ISIL the strategic victory it craves in its propaganda war against its regional rivals.

The U.S. Army’s counterinsurgency field manual, updated since its implementation under the leadership of General David Petraeus during the 2007 U.S. troop “surge” in Iraq, anticipates precisely this danger in warning that air strikes that cause unintended civilian casualties can “fuel insurgent propaganda” that displays “those killed and wounded to the media as victims of aggression.”

Whether through violent videos on YouTube or gruesome pictures of decapitated heads on gate posts, al-Baghdadi’s forces have proven especially adept at leveraging social media to attract foreign fighters to their cause from as far away as China and the United Kingdom. Nothing would accelerate ISIL’s recruitment drive faster than Iraqi streets littered with the remains of women and children killed by American missiles.

In his address announcing the waging of a limited American air campaign, President Obama went to great pains to emphasize that these strikes would be conducted “if necessary” and limited to targets advancing on the Kurdish regional capital of Erbil in northern Iraq.

Even if the United States were to use these strikes against limited targets advancing on the northern Kurdish regional capital of Erbil—which it appears Washington is doing—the clarity of President Obama’s limitations on the use of force will inevitably be obscured by the ever-present fog of war. How will the United States respond, for example, if ISIL militants manage to shoot down an American plane delivering humanitarian aid or hold captive American pilots who crash-land onto the battlefield?

The answers to these questions will inevitably involve some creeping escalation that will deepen American entanglement without articulating under just what circumstances the United States would once again withdraw from the sands of Mesopotamia. This phenomenon of “mission creep” has entangled American forces in conflicts abroad for decades, from the jungles of Hanoi to the coast of Mogadishu.

Even more alarming, the use of American military force without a clear set of overarching policy objectives or a strategy to achieve them threatens to entangle the United States in a country the Obama administration too readily abandoned in snatching defeat from the jaws of victory in 2011.

The 2007 U.S. troop “surge” contributed to the decline in sectarian violence in Iraq not only because of the sheer manpower brought to bear in Baghdad, but largely because of what General Petraeus, partnering with his diplomatic counterpart, Ryan Crocker, did with those forces.

The 30,000 additional American troops engaged in a counterinsurgency strategy whose ultimate aim was not to defeat the Sunni insurgents and Shia militants wreaking havoc in Anbar and Sadr City, but to secure the local population fed up with Al Qaeda in Iraq’s gruesome tactics and shore up the nascent Iraqi security forces so that the Iraqi people had confidence in their legitimacy and that of their national government.

By partnering with the population instead of slaughtering them through collateral damage from heavy firepower, the United States gained valuable intelligence on the ground that aided air assets in identifying specific targets for exactly the kind of limited strikes President Obama authorized this week.

After a failed effort to renegotiate a status of forces agreement to allow even just a small number of military advisors to train Iraq security forces that President Obama ultimately had to deploy anyway earlier this year, the 2011 withdrawal of U.S. forces was accompanied by a near-abandonment of the Sunni militants who had laid down their arms under American promises of payment and participation in the national government and its military forces.

When the United States left, so too did the hope of these Sunnis as the regime of Prime Minister Nouri al-Maliki jailed Sunni dissidents and his security forces attacked others, leaving a power vacuum that Baghdadi and ISIL knew they could fill.

Now that ISIL stands on the threshold of overrunning not only Baghdad, but the Kurdish capital to the north, President Obama must clarify what outcome the United States hopes to achieve in supplying humanitarian aid and striking ISIL militants. Is the United States committed to a free, stable and unified Iraq? Would it support the increasingly loud cries for Kurdish independence in the northern provinces that, up until a few weeks ago, seemed the most stable? Is President Obama prepared to deploy ground forces to achieve these objectives?

The inability of the president to articulate such a vision to the American people suggests he may not have one. ISIL and Iran do. And it is the Iraqi people—and possibly the stability of the entire region—that hang in the balance.

Theo Milonopoulos, a PhD student in political science at Columbia University, was a research assistant to former Secretary of State Condoleezza Rice from 2009 to 2011 at the Hoover Institution at Stanford University.