Why Brazil and Argentina Chose Russia Over Ukraine 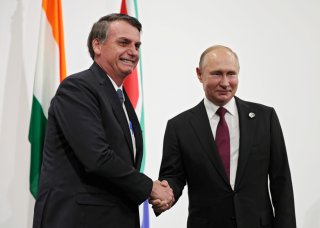 One of the more bizarre aspects of Russia’s war on Ukraine has been the behavior of both Brazil’s President Jair Bolsonaro and his Argentine counterpart, Alberto Fernandez. Both leaders paid visits to Russia where they met with Vladimir Putin shortly before Ukraine was invaded on February 24. The visits were not part of any effort to head off the invasion, which many already saw as likely, as Russian forces were menacing Ukraine.

Rather, despite the increasing tensions and the prospect of a major war in Europe, both Bolsonaro and Fernandez engaged in the kind of routine, long-planned state visits which are the bread and butter of normal high-level diplomacy, aimed at strengthening political and commercial ties and, of course, allowing for leaders to play on the international stage and, hopefully, look like statesmen back in their home capitals.

Argentina’s Fernandez visited Russia on February 2-3. There was extensive criticism of his decision, with local and U.S. commentators noting that he was taking this trip in the midst of Russia’s build-up on the Ukrainian border, and also as Argentina was concluding its negotiations with the International Monetary Fund (IMF) over the renegotiation of its $44 billion debt to the institution. It was suggested that given the heavy weight which the United States has at the IMF and the importance of the Ukrainian issue to it, a trip to Moscow was imprudent, an argument which Fernandez shrugged off.

He was accorded all due pomp and ceremony by the Russians and had a private meeting with Putin. The most notable feature of the visit was what was not said. While the world’s eyes were on the bubbling Ukraine crisis, Fernandez apparently made no mention of it in his discussions. He thanked Russia for its provision of Sputnik V Covid-19 vaccines (itself controversial in Argentina given that supplies arrived later than promised and the vaccine itself had not received World Health Organization approval).

He offered Argentina as a “point of entry” for Russian engagement with Latin America, and even as the deal with the IMF was awaiting final approval in Washington, Fernandez took the opportunity to say that Argentina needed to “stop being so dependent on the Fund and the United States and has to open up to other places and that is where it seems to me that Russia has an important place.”

Bolsonaro’s visit came on February 15, when the Ukraine crisis was even further aggravated. He said that Brazil was not taking sides, but that “my reading of President Putin is that he is a man of peace.”  He noted the many areas for cooperation between Brazil and Russia such as defense, oil and gas, and agriculture and said that he was “in solidarity” with Putin.

The U.S. government had privately counseled against the trip (a fact confirmed by Brazilian vice president Hamilton Mourao). After the trip, White House spokeswoman Jen Psaki sharply criticized Bolsonaro as “on the other side of where the global community is.” Bolsonaro brushed off all criticism, even stating that it might have been a coincidence that after his trip Putin had announced the withdrawal of some troops, describing this as a “grand gesture.”  (Of course, no troops were actually withdrawn.)

The actual invasion, coming so soon after the two visits, left both governments off balance. In the days immediately before the attack, Fernandez refused to directly criticize Russia or Putin, merely saying that he hoped that the Ukraine crisis could be resolved through “peaceful dialogue and a political solution and non-use of force.” After the fighting began, Argentina maintained an uncomfortable silence but on March 2 issued a statement saying that “no territorial acquisition through the use or threat of force can be recognized as legal.” At a session of Congress, Fernandez condemned the invasion and curiously asked for a moment of silence “for the dead of the war and those we lost to COVID.”

Argentines also waited for a public statement on Ukraine from Cristina Kirchner, the former president and current vice president, who leads a powerful faction within the ruling Peronist coalition to the point of almost being a shadow president. In typical fashion, rather than offering a straightforward condemnation, she focused, first on herself, and then on Argentine preoccupations.

In a tweet, Kirchner noted that she had supported Ukraine’s territorial integrity in 2014 (when Russia seized Crimea). She then went on to say that “after 40 years of the Malvinas [Falklands] and 8 of the conflict between Russia and Ukraine over the Crimean peninsula [I am] refreshing the memory of some people.”

If Argentina’s reaction, at least at first, was marked by equivocation and reference to its own concerns, Brazil’s was seemingly close to supporting Russia. When Vice President Mourao condemned Russia’s actions, Bolsonaro said that he himself was “the only authority who can take a position on this crisis. It is the President who speaks.” He did not, however, make his position known. However, on February 28, he said that Ukraine “trusted a comedian with the fate of a nation” and defended Russia’s recognition of the Donbas “republics.”

Bolsonaro also cast the question in terms of Brazil’s need to purchase Russian fertilizer for its huge agricultural sector, which without it could experience “serious harm.” He stressed Brazil’s neutrality while adding that “the fertilizer question is sacred.” With a president clearly disinclined to criticize Russia, let alone Putin personally, Brazil’s Foreign Ministry contented itself with an initial position urging “negotiation leading to a diplomatic solution of the question.”

Bolsonaro’s likely rival in this year’s presidential race, Luiz Ignacio Lula de Silva (Lula), and Brazil’s Left generally did not go as far as Bolsonaro’s inclination towards Russia, but definitely agreed with his position of neutrality. Lula said: “The great powers need to understand that we do not want to be anyone’s enemy … We are not interested in a new Cold War.” His former foreign and defense minister, Celso Amorim, never a friend of the United States, said that “denouncing Russia would be submission to Washington’s agenda.”

The Ukraine issue soon made it into international organizations, uncomfortable fora for both Argentina and Brazil, as votes are taken, and equivocal positions are hard to maintain. When a resolution condemning the invasion was presented at the Organization of American States, both countries opposed it. But rather than addressing the substance, they argued that as a regional forum the OAS was not an appropriate venue to discuss the question.

Not currently a member of the United Nations Security Council, Argentina was spared having to take a position there. Brazil, a member, ultimately voted in favor of a resolution demanding that Russia stop its attack and calling for the immediate withdrawal of its forces. (The resolution predictably was vetoed by Russia.) However, it was reported that Brazil had sought to soften the language. As the scope of Russia’s invasion became clearer, dodging the issue became ever more difficult, and when a vote on a similar resolution was taken at the United Nations General Assembly, both Brazil and Argentina joined 139 other states in supporting it.

All Politics is Local

How did these two democracies, important in their region, and in the case of Brazil, with pretensions to a global role, find themselves in such embarrassing, self-contradictory positions? It appears to be a mixture of ideology, personal predilections, and domestic politics. Bolsonaro seemingly feels an affinity with Putin. Both have adopted macho public personas. Both have authoritarian tendencies (although Bolsonaro operates in a far more constrained environment as Brazil has a functioning free press, legislature, judiciary, and civil society). And both adhere to a murky mixture of nationalism and cultural conservatism. A sign of the ideological element to the trip was the fact that Bolsonaro’s other stop was Hungary, where Viktor Orban governs with his own brand of right-wing populism.

Obviously, Bolsonaro miscalculated the likelihood that Russia would actually move. He doubtless did not want to give up the chance to appear as an actor on the world stage where he is viewed poorly by many counterparts. He does not have the ties with President Joe Biden that he had with President Donald Trump.

And in Europe, he is something of a pariah, given the short shrift he gives to human rights, the environment, and gender equity issues. He must have found it galling that Lula was recently warmly welcomed by European leaders and treated almost like a sitting head of state. The desire to appear as a global statesman is surely intensified by the fact that he and Lula will run against each other in October of this year and Lula is well ahead in the polls.

While the Russian invasion left him on the wrong side of both international and domestic opinion, Bolsonaro has shown that once he takes a position, whether it is right or wrong, he tends to stick with it, often with increasing vehemence and hostility to those who challenge him. This was shown in his response to the Covid-19 pandemic, which he first described as “a little flu”; he was unenthused about vaccination (indeed he did not get vaccinated himself), promoted the alleged benefits of chloroquine, and opposed masking requirements. In the case of Ukraine, he took a position to the point of crudely denigrating Ukrainian president Volodymyr Zelenskyy and was slow to be moved off of it.