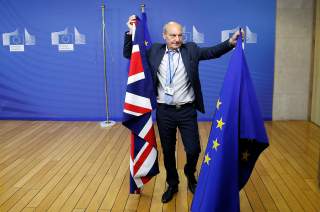 Britain’s parliament should overrule the people and cancel Brexit. There, I’ve said it.

By “stop Brexit,” I don’t mean water it down. I don’t mean finding a “soft” variant, or holding a second or third referendum until the people make the desired choice, or leave with no deal at all. I mean, literally, stop it. Parliamentarians, pass legislation now to annul the referendum result, and do your damnedest to reverse Article 50. And while you do it, stiffen your sinews, summon up your blood and prepare for the outcries to come.

When you overrule the referendum, also resolve to cancel this disastrous experiment in direct democracy, which is disfiguring our civic space and national life. Take us back from the toxic mythology of a fixed, unitary, unanswerable people’s will, to what our political settlement is supposed to be, a parliamentary government, a mediated and negotiated universe.

As a Eurosceptic at heart, I never bought the ambitious claim of the EU-phile idealists, that the EU is a the decisive force for European peace or the pacification of the continent. There were few potential wars that were waiting to erupt in the EU’s absence. Also, an early EU could hardly have arrested the monstrous forces that delivered up Nazism and Fascism in the interwar period. Nuclear weapons, NATO and the sheer deterrent effect of experience are enough to keep European states from the brink, thank you very much.

Neither is Brexit tantamount to an attack on internationalism or Britain’s technical edge. There are plenty of internationalist and dynamic democracies—think of Singapore, Canada, India or Australia—that aren’t part of single markets or political unions. And before the EU was born, there was collaborative international innovation. British scientists had the nerve and skill to develop the radar and discover penicillin long before the European Coal and Steel Agreement.

Nor should we cancel Brexit because of some cultural objection to independence. Recall the bien pensant sneer that Britons’ desire to quit the EU is somehow, inherently, both a symptom of provincial “Little Englander” sentiment for the shires and at the same time a regressive nostalgia for globe-straddling empire. The desire for sovereign independence is not something we readily mock when weaker, non-Western peoples claim it. Do Remain voters laugh at Palestinians, or East Timorese? Large swathes of the Remain campaign are responsible for fanning the revolt, with its conceit that only it represented internationalism, its conflation of the EU with European civilization, the abuse and condescension its adherents meted out in defeat, its unctuous appeals to youth over age, its class bigotries about elderly people who have worked, fought, had families and paid taxes all their lives. Talking down to the voters, Remainers were complicit in their own defeat, and helped get us where we are.

The better, stronger, bread-and-butter reason to cancel Brexit is simple: Brexit is too, absurdly expensive. It is wildly complex, time-consuming and likely to breed problems we have hardly thought about. Thanks to last week’s people’s verdict in the General Election, with the domestic front more volatile, it is now likely to get harder. As reasonably as we can expect to anticipate the course of bargaining between London and an EU that is eager to set a deterrent example, the whole gambit will cost too much treasure—and time—for not enough reward. People’s livelihoods and welfare will go the wall. We aren’t even equipped for it. We don’t have enough trade negotiators, experienced staff or precedent to guide us.

What indeed is the payoff? A bit more control, yet modest compared to the price. Britain may not be as independent as states outside the EU, but it is independent enough: we decide on our taxes, and defenses, and pensions, and most of our expenditure, and, yes, most of our immigration. The sky may not fall, but that’s easier to say if you have a secure job and livelihood that isn’t sensitive to far smaller fluctuations in the economy. Our major universities will likely survive, but getting ‘from here’ back to a tolerable place will be a hell of an effort, for little payoff. Besides, there are other more subtle ways of resisting the worst aspects of the EU. Other major EU states, like France and Germany, find ways of stretching or flouting rules when it suits their interests, and if we want to resist the tide of federalizing zealotry, there are worse ways of doing so than staying in as counterbalancing spoiler.

Am I being undemocratic? Yes. If you define democracy as direct democracy, where the majority issue final instructions to parliamentarians who are now their mouthpieces, as increasing numbers of people apparently do, then democracy can go to hell.

In its current form, the swapping of a liberal constitutional model for bids for popular mandates is plunging the country into crisis. At a time of increasing fiscal strain, of ever-mounting demands on ever more scarce resources, we simply can’t afford the Brexit adventure. And now that we have adopted a toxic form of direct democracy, it is begetting tyranny, setting up demagogic cries of “saboteurs” and “traitors,” and rival claims for mandates that can’t be resolved. Also, imaginary single “peoples”—whose will is reinterpreted by parties across the spectrum—are leading to plebiscites that generate demand for more plebiscites. The contagion of illiberal “mandate-ism” spreads from the rightist tabloids with their talk of Remainers as fifth columnists, all the way to the resurgent hard left, with its visions of a revolutionary, extra-parliamentary mobilization to give the members of parliament their orders, and the beleaguered center also indulges the populist turn, calling for more referendums to correct referendums. Is this what healthy democracy looks like to you?

The net effect of Brexit and the deeper political forces that are delivering it is to deny the legitimacy of parliament and its elected representatives. That is a violent and authoritarian tradition. We’ve seen where it leads. There was a less fraught, more compromising British democracy of greater equilibrium, summed up in former member of parliament Edmund Burke’s reply to the electors of Bristol: “Your representative owes you, not his industry only, but his judgment; and he betrays, instead of serving you, if he sacrifices it to your opinion.” Yet in the name of democracy, that constitutional tradition, where decisionmakers are held responsible and all decisions are provisional, is eroding.

If this critique just reprises ancient antidemocratic reaction, then so be it. Democracy is not the sum total of our liberty or way of life, and it must be weighed in the balance with other things we value. We also value solvency, and the material national interest, and avoiding gratuitous self-harm at a time when we must concentrate resources on other problems: the return of obscene levels of poverty, the growing legions of working poor, the decay of infrastructure, the hollowing out of our armed forces, the breakdown of family, the informal segregation of people into hostile solitudes, the return perhaps of sectarian violence in Northern Ireland, and the daily grind of life that is, for many, poorer, lonelier and desolate. As if that’s not enough, the demon of inflation has returned, long forgotten.

We have better things to do with our energy, cash and capacity, than spend two increasingly panicked years with parliamentarians scrambling to appease a version of the popular will. For this to happen, someone, somewhere, well-placed, needs to say it. With luck, it will embolden others. If the majority oppose the rescinding of Brexit, they can punish members of parliament directly, at the ballot box. If they really are determined to have their Brexit way, there’s always UK Independence Party and EU-rejectionists in pockets of the Tory right and Labour left. In which case, do your worst. There is no compelling principle by which government must rush towards hazard—with millions of vulnerable people—for fear of dissent. There’s still time to reverse it. Apologize for the referendum misstep, be up-front with the electorate whose will you are overturning, don’t dress your actions up as majority will. Above all, exercise your judgment, not your obedience. Stop it. Stop it now.

Image: Flags are arranged at the EU headquarters as Britain and the EU launch Brexit talks in Brussels, June 19, 2017. REUTERS/Francois Lenoir​.