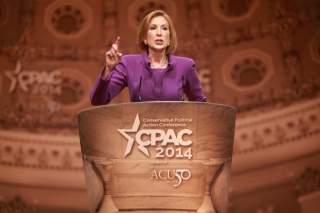 Carly Fiorina is on a roll. After the recent Fox News Republican presidential debates, she has enjoyed a significant bump-up in the polls—to 9 percent in the latest Rasmussen survey; 8 percent in the NBC/Survey Monkey poll; 9 percent in a New Hampshire poll; 7 percent in Iowa. A pollster at Suffolk University named David Paleologos tells the New York Post, “She has broken through….a real boost….She’s put herself in the game.”

What does this mean? And what does it say about the Republican electorate, the state of American politics, and Fiorina herself?

It probably doesn’t mean much, beyond the obvious fact that Fiorina is a very good debater. She doesn’t speak in platitudes or clichés, which is an observation that can’t be applied to some of her rivals in last week’s debates. She uses language that is crisp, bold and piquant. She takes firm, clear stands on issues, including high-voltage issues such as immigration. And she distinguished herself by acknowledging that the Donald Trump phenomenon is not about Donald Trump but about currents of sentiment running through the electorate.

What her little boomlet says about the Republican electorate isn’t particularly meaningful unless it is combined with two other interesting developments in these early months of the campaign—namely, the Trump phenomenon and the advance in poll numbers enjoyed by neurosurgeon Ben Carson. Neither Trump nor Carson will become president, and neither will Fiorina. But it’s interesting to note that the two men have no political experience at all, and Fiorina’s only political background consisted of a quixotic senatorial run in California against a three-term incumbent—which she lost in something approaching a landslide. In other words, her political career thus far has been a failure.

But Republican voters are restless. They don’t like the direction of the country. They don’t like politicians. They don’t think the political elites in Washington, Republicans or Democrats, know what they’re doing. So why not send them a message by casting votes for non-traditional candidates with no baggage accumulated through attachments to what is becoming a kind of Washington oligarchy? If you like the state of the country and its path into the future, vote for Jeb Bush. If you don’t, why vote for the junior Bush leaguers in the race? They all seem to be part of the same dysfunctional miasma in Washington. That’s how Fiorina’s stock began to rise. And Carson’s. Trump, being a national figure, already had leveraged this sentiment into head-turning poll numbers.

Eventually, one of the conventional pols will emerge as the party’s standard-bearer, but there are going to be some more surprises and weird developments before that happens. The Republican electorate is in no mood for conventional politics just yet.

And something similar is going on over in the Democratic Party, where the so-called frontrunner, Hillary Clinton, who has been campaigning as if she has a birthright to the office, seems listless, disengaged, haughty and vulnerable. Meanwhile, big crowds are flocking to see and hear Senator Bernie Sanders of Vermont, who bills himself as a socialist. Again, voters on this side of the aisle are disgusted with conventional politicians and are looking for alternatives. The Democrats, like the Republicans, are likely to embrace a conventional figure eventually, but for now the restlessness of the electorate is palpable.

So it appears that the Fiorina emergence, such as it is, reflects fundamental realities of today’s political landscape more than it reflects any particular political stature of the candidate herself, beyond her crisp rhetorical style and her primary win in the 2010 California senatorial race. Indeed, her most significant claim to stature was her six-year tenure as CEO of tech giant Hewlett-Packard, a job from which she was fired after engineering a mega-merger with Compaq that was widely viewed as a failure.

Consider this: To seal the $24 billion deal, Fiorina sold some 37 percent of HP assets to Compaq shareholders, including a printer business that commanded 40 percent of the market. It was, says Fortune magazine, “one of the great franchises in the world.” That was part of the price for HP to get Compaq’s struggling computer business, which was added to HP’s struggling computer business. The result was a larger struggling computer business. The folly in this becomes clear when it is noted that, at one point not long after the merger, the merged company’s Printer and PC business units each had some $24 billion in revenues, but Printers earned $3.8 billion, while PCs earned only $210 million. Why would anyone give up a third of HP’s glorious printer franchise to get a $24 billion PC business that earned only $210 million?

If there was a term to describe Fiorina’s HP performance, it would be “self-promoter.” Barely six months into her tenure with Hewlett-Packard, Fiorina appeared on the cover of Forbes for an article that billed her as a kind of “superhero savior,” as one critic put it. The magazine touted “The Cult of Carly,” described her approach as “All Carly, All the Time,” and provided great detail about her global lecture tour—dubbed, naturally, “Travels With Carly”—aboard a $30 million Gulfstream IV. As management expert Jim Collins wrote in the Wall Street Journal, “One was immediately left to wonder: Whose brand was she building anyway? It sure looked like the brand of Carly would soon eclipse the brand of HP.”

This was precisely the wrong approach to corporate leadership, argued Collins, author of highly praised books exploring the elements that go into corporate turnarounds and consistent corporate success. One element, he wrote, is CEO leadership that is “understated yet determined, quiet yet forceful.” Most successful CEOs, he added, “lack the liability of charisma” and, while “ambitious, to be sure,” are “ambitious first and foremost for their institutions, not for themselves.” That doesn’t describe Fiorina. Indeed, in comparing her with the late Katharine Graham of the Washington Post Co., Collins wrote, “One embodied the type of leadership required for true greatness, the other has thus far shown the type of leadership that erodes greatness. One saw the purpose of it all as far beyond herself, the other has acted as if the supreme purpose is herself.”

Perhaps getting elected president of the United States is far different than running a giant technology company, and Fiorina’s self-absorption will serve her well in the coming debates, primaries and caucuses, not to mention the hurly-burly of the general election. But she didn’t get where she is in today’s political whirl, wherever that is, because of any greatness as HP’s chief executive or any demonstrated brilliance at strategic decision-making or any proven political acumen. She got there because HP gave her a national profile, because the electorate is restless, and because she talks well. How far she goes from here will tell us plenty about Carly Fiorina but also about the state of the country.