Why China and Russia are Vying for Influence Over the Balkans 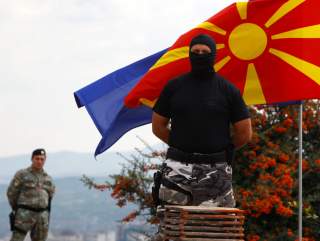 It was Otto von Bismarck, architect for Germany’s unification and rise to world power, who is alleged to have referred to the Balkans as the powder keg of Europe, a region whose internal problems often had a tendency to pull in outside powers. Indeed, it would only be sixteen years after the great statesman’s death that the assassination of the Archduke Franz Ferdinand would ignite the bloodbath of World War I. Since then the Balkans have remained a challenging geopolitical region, roiled by World War II, the Cold War and finally Yugoslavia’s savage unwinding in the early 1990s. The last gave birth to a number of countries, the tremors of which are still being felt today. This was made evident again in late January 2019, when the Greek parliament voted to give official diplomatic recognition to the Republic of North Macedonia. For a region where the interests of the European Union (EU), Turkey, Russia, China and the United States overlap, the political and economic development of even a small state like North Macedonia matters.

Since its independence in 1991 North Macedonia has been contending with pressures of creating a democracy out of an ethnic mosaic, which consists of a majority of Macedonians (a Slavic people) and a significant minority of Albanians, Turks, Romani, Serbs, and others. Together they account for about 25 percent of the population. The country’s political life has had an undercurrent of repeated crises related to problems in the neighborhood, including an overflow of refugees from fighting next door in Kosovo and a brief Albanian insurgency in 2001–2002. Furthermore, Macedonia was part of the recent migration of people from the Middle East to Western Europe, which strained the country’s resources.

As if the political challenges were not enough, North Macedonia’s economy is one of the poorest in Europe. Long closely linked to the larger Yugoslav economy, the newly independent state took considerable measures to open up the economy, making trade in a wide range of goods to EU markets a priority. Although Germany and other EU countries are now its major trade partners, the country’s exports remain heavily dependent on transit to northern European markets through Serbia.

North Macedonia’s outlook remains challenging. According to the International Monetary Fund, unemployment is over 20 percent, the labor market is hurt by skill shortages, the educational system needs an overhaul, and there is a need for a more impartial judiciary, all of which are needed to improve investment and growth prospects. Also critical to the country’s development is better infrastructure, especially in transportation.

The Balkan country had yet another problem; despite Skopje’s (the national capital) interest in overcoming its relative diplomatic isolation and desire to become a member of the EU and NATO, the path to membership was complicated and stalled by Greece, its neighbor to the south.

Starting in 1991 the Republic of Macedonia and Greece had a major problem—the name of the new state. For Greece, the problem was the name of that the new state was similar to one of its regions, which includes its second largest city, Thessaloniki. By claiming to be “Macedonia” there was concern that Skopje might one day seek to create a greater Macedonia, which would encompass parts of northern Greece, southwestern Bulgaria, southeastern Albania, southern Kosovo and Serbia. As the new country was initially in need of establishing diplomatic relations and joining international organizations, it became known as the Former Yugoslav Republic of Macedonia (FYRM), under which it joined the United Nations in 1993.

The impasse between the FYRM and Greece, however, was not an optimal situation for either country. Pressure to find a solution mounted over the last decade as trade links between the two countries gradually expanded; Greece’s depression (2010–2017) made it more important for Athens to improve relations with its northern neighbor; and the FYRM is playing an important role in the formation of new energy pipelines connecting Russia and European markets. Greece is highly dependent on imported energy and having a better relationship with its northern neighbor would be useful in this regard.

Enter Russia. Over the past decade the Russians have been active in stepping up their presence in the Balkans, a region of traditional interest. Various plans for pipelines for Russian gas (seeking to bypass Ukraine with which Russia has tense relations) include North Macedonia (among other countries). At the same time, North Macedonia is working to construct a country-wide natural gas pipeline and distribution network. Most of the country’s natural gas already comes from Russia via Bulgaria. However, in 2016 North Macedonia and Greece signed a memorandum of understanding to build an interconnector that could connect to the Trans-Adriatic Pipeline, or to an LNG import terminal in Greece.

Russia’s preference is for North Macedonia to remain outside of any Western alliance system like NATO and the EU. Russia would prefer North Macedonia and other countries in the region to fall more into its orbit. As the former U.S. Ambassador to NATO Kurt Volker in Foreign Policy noted in late 2018, “a Balkans region that is slowly, but surely becoming a normal part of Europe would upset Russia’s ambitions to keeping Europe divided into spheres of influence; of legitimizing nondemocratic, non-Western forms of top-down rule; and of creating opportunities for Russia to exercise influence through corruption, loaded energy deals, intelligence operations, and disinformation. Where Russia sees instability, insecurity, and weakness as opportunities, the EU tries to build stability, security and prosperity.”

Russia has been active in other parts of the Balkans, including Bulgaria and Romania, where it sought to influence elections. There were also investigations in Montenegro over an alleged pro-Russian coup attempt in 2016. Russia’s strategy is to maintain an important role in the Balkans, which are dominated by the EU (especially in terms of trade and investment), but it is a region that still has massive needs for infrastructure help. The opening for Russia is that the EU’s own internal politics have slowed the rush for new members, leaving countries like North Macedonia, Bosnia, Montenegro, Serbia and Albania outside of their organization.

China has been one of these countries willing and able to engage the Balkans and that includes North Macedonia. China has been active in bidding for business in the infrastructure area, in particular on the country’s transportation system. According to American Enterprise Institute’s China Investment Tracker, China’s foreign direct investment and contracts in North Macedonia during the 2005–2018 period has amounted to $400 million, all of it in the transportation sector. For China, North Macedonia is an important link between its port facilities in Greece (where it has invested in the same period $9.88 billion of which $6.7 billion has been in transport) and Serbia ($10.2 billion led by $4.84 billion in transport and $3.07 billion in energy). As China pursues its modernization of the old Silk Road through its Belt and Road Initiative the Balkans, including North Macedonia, will gain in significance as stepping stones into the broader and more affluent western European markets.

Considering all of the above, the January 25 Greek parliament vote (of 153 to 146) in favor of an agreement with its northern neighbor to recognize its decision to change its name from Macedonia to the Republic of North Macedonia has considerable consequence. The Greek vote is a major step for regional stability and a victory for the EU in the Balkan geopolitical game. Significantly it is clears the way for North Macedonia to move toward NATO and EU memberships at a faster pace. Indeed, one of the first to provide a positive response to the news was NATO Secretary-General Jens Stoltenberg, who tweeted that the vote is “an important contribution to the stability and prosperity of the region. I look forward to the future Republic of North Macedonia joining NATO.”

For its part, the United States recognized the Republic of Macedonia early in its existence and has been supportive of its membership into NATO and other Euro-Atlantic institutions. Indeed, in September 2018, then Defense Secretary Jim Mattis, visited Skopje, calling the country “a reliable security partner and a valued contributor to global peace and security.” At the same time, Mattis noted that Russia was conducting a veiled propaganda campaign against the name change in Macedonia.

The Balkans will remain a major geopolitical frontier, considering the region’s economic needs. The overlapping interests of Europe, Russia, China, and Turkey, which has its own links to local Muslim communities, will also ensure the region stays relevant. For Europe to maintain a dominant role it needs to be active in the game, something it has done through various financial institutions, such as the European Investment Bank and the European Bank for Reconstruction and Development. Bulgaria, Romania and Greece are already EU members, but the Western Balkans remain apart and open the economic statecraft of China and Russia. This makes it all the more important that the EU play its economic statecraft well. Also, the EU must continue to be supportive of deepening democracy and civic society. Along these lines, the January 2019 Greek vote was a victory, but now comes the hard part, getting North Macedonia (and other parts of the Western Balkans) up to the standards that Europe expects for a closer embrace, which means tackling government efficiency, transparency, corruption as well as improving democratic practices.