Why China Can't Be Trusted 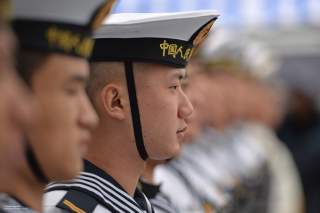 In an article published by state-owned newspaper China Daily on May 27, Director-General Ouyang Yujing of the Chinese Foreign Ministry’s Department of Boundary and Ocean Affairs reported that controversial new installations under construction on islands in the South China Sea are “primarily for civilian purposes,” including “runway, pier, telecommunication, meteorological, navigation safety, and environmental observation facilities.”

Just one day after Ouyang’s statement, the Wall Street Journal reported that U.S. surveillance spotted two motorized artillery pieces on one of the reclaimed islands. U.S. officials were quoted as saying that the weapons China planted on an unfinished reclamation could reach neighboring islands, many of which have long been under Vietnamese and Philippine control.

The presence of offensive weapons contradicted Beijing’s public statements that the reclaimed islands are mainly for civilian purposes. Van Jackson at the Center for a New American Security calls the apparent disconnect between China’s words and actions, “strategic double speak.” But the worsening strategic environment of the South China Sea requires a more thorough reassessment of China’s diplomacy and security overtures. One key question must be answered: is this something new or do China’s words and actions frequently diverge? A brief review of how Beijing engaged its neighbors in the past two decades reveals the latter to be the case.

In February 1995, a dangerous monsoon prompted Philippine forces to pause patrols of the Mischief Reef. Manila was caught off guard by how quick the Chinese maneuvered to seize the disputed domain. Soon after, the Philippines discovered that China built structures on top of the reef – four satellite communication-equipped platforms on stilts with at least three octagonal bunkers on each platform. Numerous People’s Liberation Army Navy (PLAN) vessels were also found surrounding the area, some of them heavily armed. It was Manila’s first taste of Chinese assertiveness in the South China Sea. Then-Philippine President Fidel Ramos raised the issue with his counterparts in ASEAN, and with the United States, the country’s only treaty-ally. Ramos also ordered the destruction of other buoys and markers dropped by Chinese government vessels on other parts of the Philippines’ exclusive economic zones. China threat instantaneously reverberated throughout the region. In an effort to contain the diplomatic fallout Chinese occupation of the Mischief Reef, Beijing insisted that its new facilities were only built to serve as temporary shelters of Chinese fishermen, not as permanent military garrisons. In addition, China agreed to sign a bilateral code of conduct with the Philippines to reassure the region it did not have the intention to further disrupt the status quo. However, between March and May of the following year, it was revealed that the Chinese facilities on the reef were upgraded with more sophisticated electronic equipment. By 1998, the tiny structure became a permanent, multi-story building, periodically hosting at least one PLAN frigate ever since.

Twenty years after the incident, China is now conducting a massive land reclamation project on the same reef. What Beijing described as simply a shelter for its fishermen within the Philippines’ UN Convention on the Law of the Sea (UNCLOS)-mandated EEZ in 1995 now appears to be a major military installation, which could soon host multiple PLAN vessels, and even aircraft—perhaps a prelude to the declaration of an Air Defense Identification Zone (ADIZ) in the South China Sea.

(Recommended: Could America & Russia Go To War Over Ukraine?)

In 2002, Beijing signed the ASEAN-China Declaration on the Conduct (DOC) of Parties in the South China Sea. Article V of the political document says: “The Parties undertake to exercise self-restraint in the conduct of activities that would complicate or escalate disputes and affect peace and stability including, among others, refraining from action of inhabiting on the presently uninhabited islands, reefs, shoals, cays, and other features.” In early 2014, China began land-reclamation activities on Fiery Cross Reef, Gaven Reef, Johnson South Reef, Mischief Reef, and Subi Reef in the Spratly Island group. These land reclamation projects enable the Chinese to inhabit previously uninhabited features in direct violation of the DOC’s Article V. Beijing continuously pledges to abide by its 2002 promises in the DOC, despite actions indicating the contrary is true.

At height of the Sino-Philippine standoff in the waters off the Scarborough Shoal in 2012, Beijing and Manila, through Washington’s mediation, agreed to diffuse tension by mutually withdrawing their ships in the area until a long-term deal is reached. Manila complied. Beijing did not. Since then, Chinese government vessels have been become permanent fixtures in the shoal, some 124 nautical miles from the nearest Philippine-island of Luzon and some 550 nautical miles from the nearest Chinese landmass, Hainan Island. In short, Beijing tricked both Manila and Washington, adjusting the status quo to its favor.

Beijing followed a similar pattern of strategic double speak during Premier Li Keqiang’s first visit to India in May 2013. During the trip, Li  said, “we both believe that as two ancient civilizations, China and India have the wisdom to find a fair, reasonable and mutually acceptable solution. Before the boundary question is resolved, we will improve the relevant mechanisms on border affairs and increase their efficiency, properly manage differences, and jointly maintain peace and tranquility in the border areas.” However, it was soon discovered that a Chinese battalion had pitched tents in Depsung Valley along the Line of Actual Control (LAC) in the western section of the India-China border, an area under Delhi’s control per the status quo. These events repeated themselves when President Xi Jinping visited India the following year.

These are just a few examples. However one describes such behavior—talk-and-take policy, creeping assertiveness, creeping invasion, or strategic double-speak—these cases all demonstrate one thing: there exists a persistent disconnect between China’s words and actions in many of its engagements with its neighbors. Each time Beijing is verbally confronted with this inconvenient fact, its answer is a blanket “indisputable sovereignty” claim over disputed areas. Instead of looking at how Chinese actions have worsened the region’s security environment, it resorts to blaming other countries.

Consistent with its “peaceful rise” refrain, China verbally portrays itself as a benevolent power with innocuous intentions. Perhaps most significantly, Beijing is pushing for a new type of major power relations with Washington. Recently, President Xi Jinping also declared that his country is “ready to work with the Japanese side to advance neighborly friendship and cooperation.” In the years ahead, more flowery words are likely to emanate from China and its leaders. However, with China’s actions constantly contradicting its diplomatic overtures, either instantaneously or belatedly, the world can no longer afford to take Beijing’s words at face value.