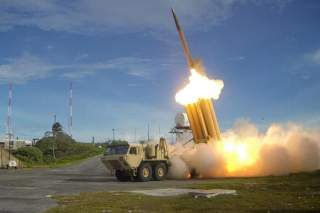 Well it seems we might want to hold off on all the predictions of Seoul and Beijing joining hands and riding off into the sunset as Asia’s new power couple--at least for now.

China is quite upset at the prospect of South Korea acquiring America’s latest missile defense platform, Terminal High Altitude Area Defense, or THAAD for short. However, Xi Jinping might want to redirect his anger at the real problem and why President Park Geun-hye might be considering THAAD in the first place: North Korea.

But before we get to the heart of the matter, it seems appropriate to understand what THAAD is, what it can do, and why its important.

Back in November, I spoke to Dan Sauter of Business Development for Terminal High Altitude Area Defense at Lockheed Martin to get a better understanding of the system and its capabilities. Sauter explained that THAAD is “a key element of the U.S. Ballistic Missile Defense System (BMDS) and is designed to defend U.S. troops, allied forces, population centers and critical infrastructure against short-thru-medium-range ballistic missiles.” He went on to explain that THAAD “has a unique capability to destroy threats in both the endo- and exo-atmosphere using proven hit-to-kill (kinetic energy) lethality. THAAD is effective against all types of ballistic-missile warheads, especially including Weapons of Mass Destruction (chemical, nuclear or biological) payloads. THAAD was specifically designed to counter mass raids with its high firepower (up to 72 Interceptors per battery), capable organic radar and powerful battle manager/fire control capability.”

THAAD also has one nice feature that is sure to get Beijing’s panties in a bunch--interoperability.

Sauter told The National Interest that THAAD is “interoperable with other BMDS elements, working in concert with Patriot/PAC-3, Aegis Ballistic Missile Defense, forward based sensors, and C2BMC (Command and Control, Battle Management, and Communications System) to maximize integrated air and missile defense capabilities. THAAD is mobile and rapidly deployable, which provides warfighters with greater flexibility to adapt to changing threat situations around the globe.”

Now that we understand a little about what THAAD is and what it can do, why should China care?

It seems Beijing is concerned that THAAD could blunt at least some of their military capabilities--going so far as to utilize Chinese hackers to steal at least some aspects of its design according to various reports.

Here is why Pyongyang matters and could drive a THAAD deployment close to Beijing’s borders. With North Korea constantly rattling the saber and developing various types of long range missiles the United States and its allies are looking for ways to defend themselves--and THAAD could certainly be part of that mix. However, as Beijing knows all too well--and why they are so upset--such weapons could be used as a shield against Chinese missiles as well.

Over the last several decades China has been building a massive arsenal of cruise and ballistic missiles. This would be a big part of any anti-access/area-denial strategy it would use against Japan and/or the United States. China’s nuclear weapons arsenal would be launched atop ballistic missiles as well. THAAD, if it were to be deployed to South Korea (which is far from a done deal, by the way), could at least in theory blunt some of the offensive firepower China is trying to deploy on both the conventional and nuclear side--double trouble for sure.

But while China might be upset at the prospects of more U.S. missile defense systems near its borders, this is a problem it hould have seen coming. Back in 2013, during the last big North Korea showdown, the United States moved THAAD to defend Guam from a possible North Korean missile attack.

The threat to China is quite clear. If North Korea were once again to create another crisis where the United States once more had to move additional missile defenses back to the Pacific and increase Aegis patrols as was done in 2013, Washington may just leave such defensive platforms in place. Back in 2013 when the crisis with North Korea was at its peak, I laid out the case for such a U.S. move and the repercussions in further detail:

North Korea may just provide the strategic rationale the United States needs to drop the veiled nature of the military and geostrategic components of its pivot to Asia...American military planners may decide to keep ever increasing amounts of ballistic missile defense systems forward deployed in East Asia for the next time North Korea threatens the region.

All of this has ramifications for Beijing. Ever increasing amounts of missile defense systems will certainly erode China’s growing anti-access capabilities. While it is hard to make solid predictions, it is clear that missile defenses utilized for the protection of U.S. bases and allies in the region also have the potential of being used and/or enhanced to defend against Chinese missiles in the event – however remote – of some sort of conflict. While no one knows for certain how effective China’s new capabilities would be in a crisis, nor how effectively American and allied missile defenses would prove against such missiles, there is certainly the potential that the potency of China’s asymmetric capabilities would be degraded.

Considering tensions between Washington and Beijing over multiple issues ranging from the Senkaku Islands, Taiwan, the South China Sea and so on, America might just conclude a little extra insurance policy against two potential problems might just be a really smart idea. Such a move would be purely defensive, strengthen cooperation with critical U.S. allies like South Korea and Japan, and could lead to a more regional outlook among this grouping when it comes to missile defense while nudging Seoul and Japan a little closer together. What is not to like?

For China, the next move should be very clear: it is time to reign in its allies in Pyongyang and make sure North Korea halts any further missile tests that could drive a U.S. deployment of THAAD or any other missile defenses. In the event of another crisis or a missile test that were to show some sort of North Korean ICBM capability, Washington would certainly rethink its commitments to missile defense in the Asia-Pacific. Any move to increase its capabilities and that of its allies would certainly negate Beijing’s missile capabilities and A2/AD capabilities. Does China really want to take such a chance? I don’t think so.