Why China Will Never Crackdown on North Korea 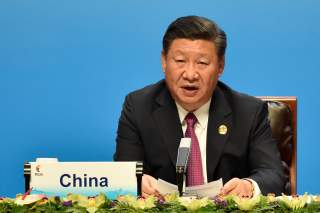 This has been a potentially momentous week in U.S.-China relations, particularly as they relate to the growing threat of North Korea’s nuclear and missile programs.

In his address before the United Nations General Assembly, President Trump used unusually direct and powerful language in warning Pyongyang that it would be “completely destroyed” if it precipitates a conflict with the United States or its allies.

His message to China, and to a lesser degree, Russia, was couched more diplomatically, but it clearly targeted their ongoing financial and economic support for North Korea:

It is an outrage that some nations would not only trade with such a regime, but would arm, supply and financially support a country that imperils the world with nuclear conflict.

Within forty-eight hours of his speech, which shocked many UN members not accustomed to such blunt talk, the president announced strong new financial sanctions against North Korea. Simultaneously, Beijing issued directives to Chinese banks to drastically reduce their dealings with their North Korean counterparts.

The question now, as it always has been, is how seriously China will sustain its new tough line against its erratic ally. That, in turn, will depend on how consistently Washington monitors Beijing and holds it to account. A clear-eyed recognition by the Trump administration of how we got into this precarious situation is essential.

That means dispensing with five myths that have long undergirded U.S. policy toward China. The working assumption, as the president put it, has been: “No nation on earth has an interest in seeing this band of criminals arm itself with nuclear weapons and missiles.” As for China, the record tells a different story.

In 1955, after the United States, South Korea and their United Nations allies had turned back North Korea’s invasion of the South, Washington deployed tactical nuclear weapons to South Korea to prevent any future aggression. North Korea’s leader, Kim Il-sung immediately began pursuing his own nuclear-weapons program with help from his Russian ally.

China, Pyongyang’s other Communist ally, which had been labeled an aggressor by the United Nations for joining in the invasion of South Korea, strongly condemned the introduction of American nuclear weapons. It called for a nuclear-free Korean Peninsula, but did not oppose Pyongyang’s nascent program under the rationale of defending North Korean sovereignty. On the contrary, China later actively supported the Kim regime’s nuclear pursuits by providing essential startup technology through the Abdul Qadeer Kahn network in Pakistan.

Beijing continued to see a strong, militarized North Korea as a useful buffer against the United States and the West. Over the ensuing decades, China supported not only Pyongyang’s nuclear program, but also its ballistic missile efforts. Extending the same assistance to Iran, Iraq (under Saddam Hussein), Libya (under Muammar el-Qaddafi), Syria and other anti-Western regimes, China became not only a proliferator of weapons of mass destruction but a proliferator of proliferators.

As North Korea’s nuclear and missile programs accelerated in the 1990s and the international community urgently sought China’s help, it responded by pressing for “denuclearization” of the Korean Peninsula—specifically, the removal of American nuclear weapons. President George H. W. Bush showed U.S. good faith by ordering the weapons withdrawal. China’s posture toward North Korea’s program did not change, then or over the following decades. It continued to be Pyongyang’s chief weapons of mass destruction enabler and its economic lifeline for food and fuel.

In addition to providing material support to North Korea, Beijing, working in tandem with Moscow, served as diplomatic protector for successive Kim regimes at the United Nations Security Council, using three basic approaches. For years, it regularly opposed economic sanctions in “principle” as violations of national sovereignty, counterproductive, and likely only to antagonize its ally and compel it to dig in its heels. Eventually, as Beijing saw itself becoming diplomatically isolated (except for Russia), it went along reluctantly with the concept of sanctions. But, in this phase of its strategy, it used its veto threat as leverage over the council and consistently diluted its resolutions to ineffectiveness.

Finally, in phase three, intense international pressure compelled China to join in the sanctions regimes, but only formally. It invariably undermined the resolutions either by simple nonenforcement or by active subversion through black market and back-channel networks. Earlier this year, for example, China “fulfilled” its promise to drastically reduce coal purchases from North Korea by first doubling up its orders for the months preceding the supposed reduction. Similar techniques over the years have prevented UN sanctions from having the intended bite on North Korea’s economy—while conveniently supporting Beijing’s argument that sanctions don’t work.

Defending its failure to compel North Korea’s denuclearization, Beijing continues to plead impotence, once saying Pyongyang would rather “eat grass” than abandon its weapons. Of course, China has never presented the Kim regimes with anything like that painful choice. Meanwhile, it is the North Korean population that has been condemned to deprivation and primitive starvation as the Kim regime elites fatten on luxury foods and goods.

Alternatively, Beijing argues that more severe pressure, such as a cutoff of China’s oil exports to North Korea, would trigger an economic collapse and precipitate a massive refugee flow into China. But that narrative assumes that the Kims, confronted with a choice of giving up nuclear weapons or giving up power, would opt for regime suicide. Beijing has never acted to convince Pyongyang that nuclear weapons do not assure its survival but threaten it, either from Chinese economic measures or U.S. military action that could also implicate China.

The more plausible explanation for Chinese behavior is that given the alternatives of a nuclear-armed North Korea posing existential threats to South Korea, Japan and American cities, or a unified, nonnuclear regime friendly to both China and the West, Beijing is content to stick with its erratic buffer ally, and Western concerns be damned.

“It is not in China’s interest for North Korea to possess nuclear weapons.”

Those words have been recited verbatim over the decades by virtually every China expert, in and out of government. Its wishful repetition, however, has not convinced Beijing. It has consistently seen its own interests differently from the way Westerners believe it should. While paying lip service to denuclearization, China has long recognized that a nuclear-arming North Korea has well served China’s strategic interests.

For almost seventy years, North Korea has been a major diplomatic distraction and resource diversion for the West. It has given China cachet as a responsible international stakeholder and good-faith negotiating partner purporting to pursue the termination of Pyongyang’s WMD programs. Together with its economic clout (fostered in large part by Western policies), the North Korea conundrum has enabled China to become Asia’s indispensable nation on security matters as well.

Whether the issue is currency manipulation, unfair trade practices, Taiwan, the South China Sea, or human rights, the international community is reluctant to press Beijing too rigorously because “We need China on North Korea.”

Aside from governments in China, Russia and other places that do not wish the West well, the international community has rightly been preoccupied with the dire implications of a nuclear-armed North Korea. But, even without those weapons of mass destruction (including chemical and biological munitions), successive Kim regimes in Pyongyang have already inflicted an ongoing humanitarian catastrophe on generations of the North Korean people.

In March, the United Nations Human Rights Council called for further action to implement the findings of the 2014 UN Commission of Inquiry on the human-rights situation in North Korea.

The commission found that the gravity, scale and nature of the human rights violations in North Korea have no parallel in any other country in the contemporary world, and amount to crimes against humanity. Abuses included enslavement, extermination, murder, rape and other sexual crimes, deliberate starvation, and enforced disappearances “pursuant to policies at the highest level of the state.”

Going after the Kim regime perpetrators presents the international community with the perennial ethical dilemma in such situations. While bringing North Korea’s evildoers to account may deter future crimes in other places, it would also constitute a disincentive for the present regime to surrender power, which is the ultimate solution for the North Korean people. Lessons from the experience of Nazi Germany, Imperial Japan, South Africa, Yugoslavia and elsewhere will apply in one form or another to North Korea.

For now, Washington and the West have prioritized denuclearization over the human-rights tragedy. Secretary of State Rex Tillerson indicated last month that Washington is prepared to live with a North Korea without nuclear weapons: