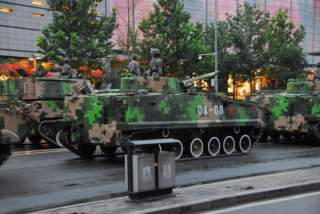 With confrontation looming in the South China Sea, all eyes are turned to China's military expansion. News that China is building massive naval docking facilities and transforming its new South China Sea island into a mid-ocean air force base is scaring the whole region into arming up. The message is clear: after 200 years of western domination, China is back.

Or is it? Contrary to the prognostications of western doomsayers, China is not facing imminent political collapse. Its economic growth is inevitably slowing down but its economy is relatively healthy compared to those of its peers. But claims (or fears) of Chinese global domination are clearly overblown. The budget numbers just don't add up.

The 2015 headline expansion in China's military spending is 10.1 percent, continuing two decades of double-digit growth. Astute economists have pointed out that these figures are rarely adjusted for inflation. Worse, they do not take into account the fact that wages (the PLA's largest expenditure category) are rising much faster than inflation in China. It may still be a lot of money, but 741 billion yuan just doesn't go as far as it used to.

And then there's corruption. Though America has had its share of procurement scandals, generalized corruption is not institutionalized in the United States Armed Forces. In China it is integral to the functioning of all state bureaucracies. The military is no exception, as the Chinese government itself admits.

In mid-January the government announced the names of 16 senior military officers who were placed under investigation for corruption in 2014, including a parade of former logistics officers. Then came the bombshell: reported investigations of 4,024 senior officers (including 82 generals) for corruption and other financial irregularities.

No one knows what proportion of China's double-digit military spending increases of the last two decades has been frittered away in corruption. But it is suggestive that the beginning of China's military spending boom roughly coincided with the government's 1998 decision to close down the PLA's civilian business operations.

Denied the opportunity to make a little money on the side, it could be that the PLA's officers shifted their business model from selling widgets to stealing directly from the public coffers. The PLA's bloated command structure is divided into seven military regions, creating a plethora of top officials administering their own budgets. This creates an environment that is positively primed for corruption.

Even low-level bureaucrats in China have been known to siphon off fortunes running into the tens of millions of yuan. Given the scale of corruption in China, it is no surprise that PLA officers routinely pay bribes to secure promotion, in effect purchasing commissions. This may or may not compromise China's military readiness. But it certainly inflates military budgets—and in a big way.

Today China's (acknowledged) military spending is rising roughly in line with GDP growth and is stable at about 1.3 percent of GDP, according to official figures from the China Statistical Yearbook. China acknowledges spending another 1.4 percent of GDP on internal security. This includes paramilitary units but also ordinary law-and-order policing. China offers no more detailed breakdown.

Western analysts sometimes lump these two figures together to conclude that China spends nearly 3 percent of GDP on defense, but this is clearly inappropriate. More than 80 percent of the internal security budget is spent by local government units. China's government may be opaque to outsiders, but one thing we can be sure of is that China is not allowing its provinces to develop their own military capabilities.

The Unites States does spend more than 3 percent of its GDP on defense, one of the highest rates of defense spending in the world. Considering that the United States also has the world's largest economy, the world's most advanced technology, and a web of globe-spanning military alliances, it doesn't have much to fear from China. A careful analysis of budgetary trends suggests that it never will.

As China approaches middle-income status, its government expenditures for social welfare are rising faster than GDP. China is expanding public education to better serve its rural population and considering extending urban welfare benefits to all urban residents, even those who lack official urban household registration (hukou).

At the same time, China's population is rapidly aging, placing enormous pressure on health and pension systems. The proportion of the population that is aged 65 and over is expected to rise from 10 percent today to more than 20 percent in 2035. Elder care will increasingly strain Chinese government budgets in the decades to come.

Just as the United States faces tensions between domestic and military spending priorities, so too does China. The difference is that the United States is already rich and is not facing demographic collapse. The United States also has a flexible and (relatively) effective system of progressive income taxes that can easily be raised in times of crisis. China does not.

Like most middle income countries, China relies mainly on indirect sources of revenue (consumption taxes, corporate taxes, value added taxes, and land sales) to make ends meet. These kinds of taxes tend to rise more slowly than income. Thus, as China continues to develop, its tax revenues will grow more slowly than its economy as a whole.

As a result, China's military spending will be caught between a rock and a hard place. The PLA may be able to maintain some fiscal momentum by improving efficiency and reducing corruption, but the days of double-digit budget increases are over. Soon the Chinese government will be asking the PLA to "do more with less." American generals may come to sympathize with their Chinese peers.

This is bad news for corrupt officers at all levels of the PLA, many of whom will have paid premium prices for their jobs at the top of the military market bubble. But it is good news for China's neighbors and the security of the Asia-Pacific region. The South China Sea may not break out in peace overnight, but China simply will not be able to sustain the current pace of its buildup in the region.

One of the most advanced weapons in the arsenals of developed liberal democracies like the United States, Japan, and Australia is their fiscal capacity. Corrupt, authoritarian states like China and Russia can make impressive short-term military gains but they do not have the fiscal staying power to compete in the long game of history.

China seems unlikely to become a developed liberal democracy any time soon. If it does not become one, it will never possess the fiscal resources required to threaten its neighbors or the United States. And if China does somehow manage to become a developed liberal democracy, its neighbors and the United States will have nothing to fear from the new China.

Salvatore Babones is an associate professor of sociology and social policy at the University of Sydney and an associate fellow at the Institute for Policy Studies.