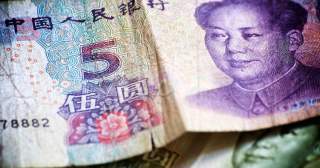 Beijing’s belated efforts to cut its $27 trillion debt pile have sent financial markets tumbling. Can China succeed in winding back a credit blowout before it turns to a bust?

When the National Interest last reported on China’s debt, the total debt burden exceeded an estimated 260 percent of gross domestic product (GDP), up from 163 percent in 2008 and outpacing the surge in U.S. and British debt before the financial crisis.

The nation’s “shadow banking” sector has also ballooned, with wealth management products tripling to $3.8 trillion in just three years, while corporate debt has swollen to 156 percent of GDP amid a quadrupling of total borrowings in just seven years.

Fast forward a few months and the picture is no less alarming for citizens of the world’s second-largest economy, along with the rest of the world. This week, Moody’s Investors Service downgraded China’s debt one notch and noted that the country would have to borrow more in order to maintain the level of economic growth that its government wants to achieve.

Prior to the downgrade, China’s latest GDP data showed that policymakers were continuing to rely on debt-fueled infrastructure spending to drive growth. The economy expanded by a reported 6.9 percent for the first quarter, ahead of market expectations for 6.8 percent growth, but as ANZ Research noted, it was the “same old investment story.”

An overheated housing sector got even hotter, with investment in real estate development rising by over 9 percent and housing investment by more than 10 percent. However, this saw mortgage debt jump by 800 billion yuan ($116 billion) in March, the quickest monthly growth ever recorded.

Total social finance—a measure for overall credit in the economy—rose 4 percent on the previous year to nearly 7 trillion yuan, spurred by more than 320 percent growth in the shadow banking sector.

A total of 4.2 trillion yuan was added to the debt pile in the first quarter alone, equivalent to around a quarter of GDP, according to ANZ Research.

“The question we need to ask is whether this investment-led model is sustainable as the authorities have trouble taming credit,” the Australian bank said.

“We need to watch closely whether China’s top leadership will send a stronger signal to tighten monetary policy,” the bank said in its April 17 research note.

However, credit-ratings agency, Fitch Ratings, has warned that even with this year’s more modest official growth target of around 6.5 percent, credit growth will outpace GDP by a factor between 50 and 100 percent.

“[The rate of credit growth implies] a further rise in leverage across the broader economy this year, despite the authorities’ acknowledgement of these growing financial risks,” Fitch Ratings said in a research note.

The result was a slump in mainland stock markets and a spike in government bond yields. The benchmark Shanghai Composite Index fell more than 4 percent from its April 11 peak, while yields on ten-year government debt hit their highest level since August 2015.

Beijing has imposed tougher capital controls to stem outflows, while the official exchange rate has been guided higher to prevent “panic sentiment from spreading to the currency market,” said economist Xia Le.

Chinese companies have also canceled an estimated 184 billion yuan worth of bond sales this quarter, although those companies still face an estimated 3 trillion yuan in bond repayments, amid rising bond yields. Four firms have defaulted since March 31 and more defaults are expected as borrowing costs soar.

According to the Financial Times, nearly a third of fund managers say China’s belated tightening of credit is now “the biggest tail risk for markets.” Not since January 2016 has China ranked above the threat of a eurozone break-up as the biggest worry, according to a Bank of America Merrill Lynch survey.

“Given the pace and level of credit creation in China, it is only a question of time, perhaps no more than two to three years, before it will endure some form of deleveraging, which is likely to presage a protracted period of low growth and currency depreciation,” he warns.

Magnus suggests that the shadow banking sector in China represents an Achilles’ heel for policymakers in their desperate attempts to keep the economy on track before the fall’s National People’s Congress.

“The funding structure of such liabilities does have a timeline that is much more immediate than the state rolling over state-owned enterprise and bank debts,” Magnus argues. “A shadow-funding crunch with lenders steadily shut out of the system, and going bust with potentially dire consequences for the rest of the financial system could well play out between six months and two years from now.”

The economist has nominated GDP growth sliding below 6.5 percent as the “acid test” for Beijing. “You can’t resolve a debt problem peacefully,” he told the Financial Times.

According to a Reuters survey, China’s economy is expected to slow to 6.2 percent GDP growth in 2018 from 6.5 percent this year, extending a slowing trajectory following last year’s 6.7 percent gain that was its weakest performance in twenty-six years.

Yet Chinese policymakers remain anxious to prevent a slowdown prior to the National People’s Congress, which is expected to cement Chinese president Xi Jinping’s hold on power. Xi’s latest project to cement his place in communist history is his Belt and Road Initiative, which may further exacerbate the nation’s debt problem.

Yet Minxin Pei, professor of government at Claremont McKenna College, warns that the whole project may result in a massive debt blowout for which China is ill prepared.

He points to a 260-mile railway being built at a cost of $6 billion in Laos, an impoverished Southeast Asian nation with a GDP of around $12 billion, as an example of massive loans being foisted on countries unlikely to ever repay them.

“China will have limited leverage over its debtors and may get pennies on the dollar if the hundreds of billions of dollars in Belt and Road Initiative projects become dud loans. Chinese taxpayers will be left holding the bag,” he said.

In the short term, Beijing can only hope that its crackdown on the financial sector will curb its excesses while not slamming the breaks on real estate prices, which would hit financial institutions along with local governments that rely on land sales for revenue.

But with everyone from the International Monetary Fund to Chinese bankers and politicians warning about the debt crisis, the clock is still ticking on the world’s biggest potential debt blow-up since 2008. Should a crash eventuate, the rest of Asia and the world would quickly share the pain.