Why Chinese Aggression Starts at Home 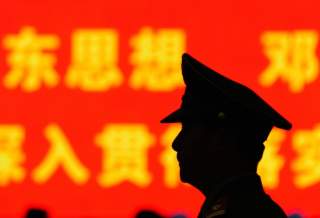 The cycle of U.S.-China relations has again spun downward, reminding us how difficult it is to maintain peace in a region where a new great power is emerging into the domain of another, longer-established great power. Chinese leaders are well aware of the danger of a rising challenger attracting hostility from the established great power or a coalition of states that want to preserve the status quo. Chinese officials, scholars and commentators have spoken for over two decades about their desire to avoid international opposition to a rising China. Yet PRC President Xi Jinping seems much less worried about this problem than his predecessors in Zhongnanhai.

To many outsiders, Xi’s assertive policies in East and Southeast Asia seem ill-advised even from the standpoint of Chinese interests. Regional governments, already wary of the prospect of Chinese domination, are watching China closely to discern what manner of intentions will guide growing Chinese military capabilities and economic power. Furthermore, China remains substantially weaker than the United States on the most important measures of national power. If we remove the problematic “purchasing power parity” filter, China’s gross domestic product in 2016 is about $11 trillion (based on Chinese figures, which outside analysts generally consider to be inflated). America’s is about $18 trillion. The United States is far ahead of China in productivity, innovation and technological sophistication. The U.S. military outclasses China’s, and the United States has a network of allies and bases in the Asia-Pacific. China has one formal ally (North Korea) and one military base, in the East African country of Djibouti. Washington appears committed to maintaining the U.S. strategic position in the region. This would not seem to be a favorable time for China to openly attack the U.S.-sponsored regional order. Yet China’s demands that neighboring states accommodate Beijing’s wishes appear to be strengthening. In the eyes of many Asia-Pacific governments and societies, some of China’s demands that foreigners accommodate Chinese preferences are unreasonable and even alarming.

The world has accepted many Chinese preferences as legitimate and accommodated them. Foreign capitals are not calling for China to give up its nuclear weapons. Countries tolerate massive Chinese economic penetration even when they worry about the harm this causes to their own industries and the political leverage China might gain from its economic influence. The international community does not obstruct China from winning when the Chinese play by the rules. Other governments do not recognize Tibet as an independent country. Societies that champion human rights engage in robust trade with China despite a worsening climate for civil and political liberties under the Xi administration. Contrary to popular belief in China, the U.S. government does not practice a “containment” strangulation policy against the PRC. Rather, America continues to abet Chinese economic development by educating Chinese students and tolerating a trade deficit with China that has reached $367 billion and is still rising. This despite continuous and serious complaints from American businesses inside China about unfair treatment by Chinese authorities. In deference to PRC sensibilities, only a handful of small, poor countries have diplomatic relations with Taiwan even though Taiwan has the world’s twenty-third-largest economy. Important international organizations welcome Chinese membership. Washington freely issues visas to Chinese journalists despite the official harassment of U.S. and other foreign journalists in China. After the United Kingdom rushed to join China’s newly-established Asian Infrastructure Investment Bank (AIIB) in 2015, an unnamed U.S. official complained about “a trend toward constant accommodation of China.” But Washington itself stopped criticizing the AIIB later that year.

Despite the space the region has cleared for China, Beijing is demanding international acquiescence to several Chinese strategic preferences that most regional governments consider illegitimate. For example, China claims some (unspecified) form of ownership over nearly the entire South China Sea and most of its “islands,” including features that are within the exclusive economic zones of Vietnam and the Philippines. From the standpoint of external observers, China’s claims are excessive and unjustifiable. Using China’s logic, America could claim the entire northeastern quadrant of the Pacific Ocean, India the Indian Ocean, and Mexico the Gulf of Mexico.

Although China and the other claimants each argue that their own claims are valid and that competing claims should be rejected, each should also recognize that compromise is necessary. Moreover, the reasonable solution to this quandary is for the international community to jointly establish a set of rules for sorting out maritime territorial disputes. This thinking resulted in the United Nations Convention on the Law of the Sea (UNCLOS), ratified by 164 countries including China. As the July 2016 ruling by the Permanent Court of Arbitration in the Hague reaffirmed, under UNCLOS guidelines China’s broad claim over most of the South China Sea as well as China’s assertion of “historical rights” to ownership of certain island-like features are invalid. Beijing now argues, however, that in this case, UNCLOS should not apply. This is because, according to China’s interpretation of Asian history, China owned these maritime territories long before UNCLOS came along. The PRC’s South China Sea policy presents two disturbing implications. First, Beijing reserves the right to disregard international agreements China has signed if abiding by them would go against a Chinese interest. Second, when involved in a dispute with other countries, Beijing’s inclination is to force them to submit to China’s will while presenting a veneer of willingness to negotiate. In the present case, Beijing insists on one-on-one talks with each rival claimant while pressuring them through economic leverage and military intimidation.

On the Korean Peninsula, Pyongyang has apparently figured out that the Chinese will underwrite the regime’s economic survival even if it defies China’s wishes by building a nuclear missile capability and attempting to force concessions from its adversaries through provocative statements and actions. China’s aversion to a collapse of the Kim regime is understandable. Less understandable, however, are Beijing’s attempts to restrict the South Koreans from taking actions to protect themselves against the dangers posed by North Korea. Chinese official commentary takes the position that Seoul’s decision to deploy the THAAD anti-missile system is as bad as or worse than Pyongyang’s nuclear and ballistic missile testing, and that China should make its cooperation on new United Nations Security Council sanctions against North Korea conditional on Seoul rescinding its THAAD decision. The Chinese criticism of Seoul for its desire to hold joint exercises with the United States or to deploy the THAAD anti-missile system is doubly unjustified considering the Chinese role in enabling North Korean behavior. Beijing naturally views its relationships with North and South Korea within the context of Chinese interests. For the Chinese to expect, however, that Seoul must significantly compromise its vital interest to conform to a Chinese preference for limiting U.S.-ROK missile defense cooperation is unreasonable.

Beijing insists that the people on Taiwan must sooner or later accept PRC provincial status, and warns them that making Taiwan’s de facto independent status official would result in a PRC military attack. This is a nineteenth-century mindset in a world that now believes in settling issues such as Quebec or Scottish separatism at the ballot box, not through armed conflict. China’s position is effectively state terrorism, tolerated by the international community because of China’s political and economic importance.

If Xi’s foreign policy seems counterproductive at the global level, we might be looking in the wrong place. The preeminent drivers of China’s foreign policy today are found in Chinese domestic politics. The first of these drivers is the Chinese view of history, which is a peculiar combination of entitlement and grievance. What the Chinese know about their history prior to its encounter with superior Western military power convinces them that China is the natural and rightful political, philosophical and economic leader of Asia. Education and propagandizing about the more recent Century of Humiliation, on the other hand, inculcates outrage and a desire to avenge foreign predations against China. The Chinese spin on history is that China should be on top, other countries will try to obstruct this outcome, and they deserve to be humbled.

The second domestic driver is the set of immediate political challenges that Xi faces. These include consolidating his position as paramount leader, rehabilitating the legitimacy of the Chinese Communist Party, and carrying out the necessary but painful transformation of the Chinese economy. By demonstrating to the Chinese public that he is a strong leader who can successfully impose China’s will on its neighbors and face down the Americans, Xi makes progress toward accomplishing all three of these goals. Confronting the alleged anti-China designs of foreigners (such as “stealing” Chinese resources and territory in the East and South China Seas) establishes the patriotic credentials of both Xi and his party, an essential qualification for worthiness to rule China. Recall that the Chinese still honor Mao despite his disastrous economic and social policies because he gets credit for getting China to “stand up” and bringing the Century of Humiliation to a close. The prestige Xi gains from demonstrating Chinese strength in the international arena will be essential for him to prevail against the entrenched interests that will resist his attempts at economic restructuring.