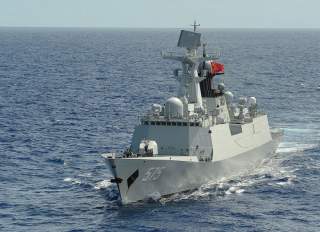 If we are sliding into a new era of great power conflict between China and the United States, then the front lines of such a struggle will clearly be located in maritime Asia.  It is here where Beijing appears to be intent on more actively asserting its claims to contested territory in the East and South China Seas.

Not surprisingly, China’s neighbors, particularly Japan, Vietnam, and the Philippines, have strenuously objected to these moves.  So far Washington has avoided being directly dragged into such confrontations.  However, should shots be fired over Asia’s troubled waters America will be find it difficult not to get involved.

There is a great deal at stake in both the East and South China Seas, not only for those competing over these spaces, but also for the United States. It is crucial to understand why the situation there has become so fraught:  In both cases it is widely recognized that the key driver for conflict is the rise of nationalism, particularly in China. But, such a view is incomplete, and as a result misleading.

Chinese nationalism is not a singular entity. The way it is framed with reference to China’s Asian neighbors varies significantly. Within such variations lie important, but largely overlooked, implications for the how Beijing is handling its maritime disputes, and by extension for the degree of volatility within such conflicts.

Paradoxically, Chinese nationalism towards Japan is so pointed that it has an ossifying effect on Beijing’s approach to the East China Sea. In contrast, in the South China Sea there is somewhat less at stake for Chinese nationalists and the situation is much more fluid and potentially dangerous.

The East China Sea-How Nationalism May Be A Deterrent of Conflict:

Opposing Japan is a foundational anchor for contemporary Chinese nationalism–and it is difficult to understate the depth of antagonism toward Japan in China. It is readily visible in everyday life within China, both in casual conversations and in the stream of shows on Chinese television that repeatedly re-create scenes of past Japanese aggression. Such belligerence was most recently on public display during Beijing’s September 3 commemoration of the 70th anniversary of Japan’s surrender that ended WWII.

One might think that such a vilification of Japan would tend to make the conflict between Beijing and Tokyo over ownership of the Diaoyu/Senkaku Islands in the East China Sea all the more explosive. It did appear to fuel confrontation in 2012 when the two sides last escalated their dispute over this territory.  However, at that time, China’s leaders stopped short of direct military engagement with Japan, because domestic ramifications of a battlefield death would have been wide-ranging and potentially impossible to manage. In other words, Chinese nationalist sentiment toward Japan was so toxic that Beijing appears to have come to the realization that bluntly engaging Tokyo on disputed territory carried too much risk.

The subsequent period of extended détente, albeit a frosty one, between the two East Asian nations, is a natural extension of such a push. Beijing is being deterred in the East China Sea by the depth of anti-Japanese sentiment in China.

Such a collective identity makes the prospects for peace over the Diaoyu/Senkaku Islands exceedingly remote, but it also has a calcifying effect on the conflict itself. It leaves it frozen in place, unlikely to be resolved, but equally unlikely to devolve into an armed confrontation. Thus, unexpectedly, Chinese nationalism, at least in this case, is a cause for something that resembles stability within the region.

Chinese nationalists have also set their sights on the South China Sea and reclaiming contested territory there. However, Chinese sensitivities here are less raw, less pronounced, than they are in the East China Sea. As much resentment as there is in China of perceived Vietnamese and Filipino infringements upon Chinese sovereignty here, Vietnam and the Philippines are bit players within the story of Chinese nationalism in comparison to Japan.

Perversely, the absence of such pointed animosity makes for a more fluid, and potentially dangerous, security dynamic. A Chinese death in the South China Sea, whether at the hands of Vietnam or the Philippines, would raise the ire of Chinese nationalists, but it would not enflame nationalist sentiments in the way that a similar event would if it involved Japan.

As a result, China’s leaders can bolster their nationalist credentials at home in these disputes by exerting greater pressure on Hanoi and Manila, without running as great a risk that should things go astray they might result in upheaval at home.

By extension the situation in the South China Sea is less stable, and more dangerous, than is the case in and around the Diaoyu/Senkaku Islands.

Ongoing Dangers (And a Sliver of Hope):

Relying on nationalism as a deterrent for armed conflict in the East China Sea is a rather bleak prospect, especially as the argument forwarded here suggests that, should China and Japan move in this direction, it would escalate rapidly. If peace hinges on just how much hatred for Japan there is in China then it is a fragile truce that has been reached at best. However, it is just such a prospect that may be sufficient to continue to put this contest on hold for the foreseeable future. The strength of nationalist sentiments within China mean there is no room for compromise with Japan, but also little likelihood of armed engagement.

In contrast, the dangers of military engagement in South China Sea are greater because China’s leaders are less hemmed in by domestic passions against the other claimants to these waters. Beijing can take the chance that assertive policies toward Vietnam, or the Philippines, might go astray through an unexpected contingency, or planned engagement, because should this happen the domestic blowback, and demand for retribution would not be as enraged, as adamant, and as potentially explosive, as would be the case should a similar episode were to occur in the East China Sea. This means that Xi has the leeway to engage in more adventurous policies along China’s southern maritime frontier.

There is, though, a possible silver lining within this otherwise dark view of where things stand in the South China Sea. As Chinese interests and identities are not quite so deeply entrenched here a potential opening exists for negotiation, multilateral discussions. In other words, stepping back from what is otherwise an incredibly dangerous game that could not only destabilize the region, but also drag U.S.-China relations into a new era of confrontation.

It is in Washington’s interest to create conditions that might encourage such dialogue, while at the same time signaling to Beijing that the U.S. is intent on seeing peace preserved throughout Southeast Asia.

America should not recuse itself from the Sino-Japanese territorial conflict, but instead, refocus its attention on the more tenuous situation in the South China Sea.  Despite the perils there, the U.S. may still be able to play a role in pulling the region back from the brink of war.