Why Civil War is About to Erupt in Somalia 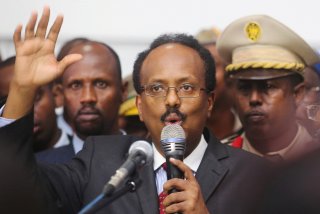 The “Black Hawk Down” episode and the piracy depicted in the film “Captain Phillips” continue to shape the American image of Somalia. For years, such perceptions have been unfair. Between 2010 and 2014, there were more than 350 pirate attacks or attempted attacks; over the next five years, there were eight; most piracy today occurs in the Gulf of Guinea, where 90 percent of kidnappings at sea now occur. Garowe, the capital of the Puntland state that I had the opportunity to visit last month, is secure. Business flourishes. Construction is constant. Locals and visitors both walk around the city or take advantage of its coffee shops and restaurants without security. Under the presidency of Sheikh Ahmed Madobe, Kismayo, the commercial capital of the Jubaland state, is also reportedly booming, even if its countryside is less secure than Puntland’s.

The national capital Mogadishu, however, remains a mess. Somalis, of course, bear ultimate responsibility for Mogadishu’s insecurity and decline, but much blame also rests on the international community and the tendency both in Washington and at the United Nations to confuse money spent with effectiveness. Since 1991, the international community has invested more than $50 billion in Somalia. Most of that money was wasted. This should never have been a surprise John Drysdale, who spent much of his career in Somalia, was fluent in Somali, advised several Somali prime ministers, warned in his history of the region, “Opportunism, being the ancient key to Somali survival in savannah conditions, could be readily turned by recent generations of urban dweller to the exploitation of alien moneybags.” The theory was reality. Transparency International has consistently ranked Somalia to be the world’s most corrupt country. While U.S. Ambassador Donald Yamamoto and James Swan, a former U.S. diplomat who now heads up the local UN mission, have lobbied both for aid and debt relief in order to build patronage for and empower the central government, the problem is that such a strategy has never worked in Somalia. Mohamed Abdullahi Farmaajo, whom Yamamoto and Swan have extra-constitutionally sought to empower, has used the resources provided to him to punish political competitors rather than fight terrorists or build the country.

Farmaajo’s four-year term expired two weeks ago after he had for months undermined the integrity of elections that might have replaced him. While the Somali president asserted the right to an extension as some of his predecessors received in order to arrange new elections, Farmaajo acted unilaterally rather than build broad consensus for the move. The opposition balked and called for peaceful protests in central Mogadishu but Farmaajo’s forces fired on crowds that included his chief competitors.

On February 21, Puntland President Said Abdullahi Deni, who has distinguished himself as among Somalia’s most effective and mature political leaders, addressed Somalia’s current situation. He warned bluntly that Farmaajo’s behavior and the international community’s tolerance for it could return Somalia to the chaos of the 1990s. The United States, United Nations, European Union, and African Union have all supported a federal model in Somalia that would balance regional and central government. Deni argued that Farmaajo has unilaterally abrogated this. Frankly, he is right: Yamamoto and Swan have both sought to empower the individual at the expense of the system. The Puntland leader warned that Farmaajo has threatened to use the Turkish-trained Gorgor special forces and Harimocad special police, both of which he had previously deployed against political enemies, but Deni said that he would not give in and he has forces that will protect his regional government. Indeed, Deni pointed out that since Farmaajo took office, Somalia’s special forces only do battle with political critics but not the al-Shabaab terrorist group that they were created to counter.

The credibility of the international community is at stake. Deni said that when he and other regional leaders warn Yamamoto, Swan, and other ambassadors about their concerns or seek assistance to stop Farmaajo’s violations of previous agreements, the international community simply refers to the sanctity of the Sept. 17 agreement in which Farmaajo and Somalia’s five Federal Member States agreed to an indirect model for the forthcoming elections. Deni noted, however, that Farmaajo had refused to uphold his end of the agreement. Mediation always fails when one side violates agreements with impunity. Regardless, Deni said that the issue is no longer the Sept. 17 agreement, but rather the lack of the agreement during the summit in Dhusamareb on Feb. 1-6, 2021, summit and Farmaajo’s use of force against the opposition.

That the international community—including the United States—funded the forces that Farmaajo now wields both gives Washington standing to intervene diplomatically and raise questions about the management under Yamamoto and both the Obama and Trump administrations of the counter-terror portfolio.  The situation is now so bad that neither Deni nor Madobe can travel to Mogadishu for fear that the increasingly erratic Farmaajo will poison them.

Deni’s speech was not an exaggeration but rather a blunt warning. Farmaajo failed and seeks now to ruin elections than face defeat in them. Yamamoto and Swan, too, have failed. They acted like colonial governors, sought to prop up a client, and are now unwilling to admit error. Together, tens of thousands of people might now die because of their pride.

Somalis and the international community now have a choice: civil war or Farmaajo’s exile. There is no longer a middle ground.