Why Colby Is Wrong on Taiwan 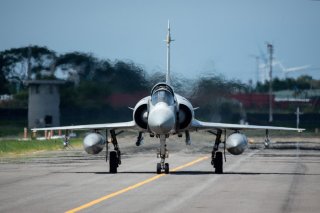 In his recent Foreign Affairs article “America Must Prepare for a War Over Taiwan,” Elbridge Colby argues that the solution to sustaining stability in the Taiwan Strait is for the United States to greatly ramp up its defense spending in Asia in order to deter an otherwise likely Chinese attack on Taiwan and preserve peace in Asia.

Yet instead of preserving the peace, Colby’s approach would guarantee conflict, produce an open-ended U.S-China arms race, significantly increase the chance of further conflicts over Taiwan or other issues, and of course, destabilize the global economy.

Colby consistently fails to adopt any frame of analysis for the Taiwan issue other than a simplistic force-on-force approach. In doing so, he overestimates the capabilities of the Chinese military to take Taiwan and totally ignores the reality that even a militarily inferior Beijing will still employ force against the island if it believes that the United States were using its military might to back a clear bid by Taipei for independence.

As examined in my recent Quincy Institute study of U.S. threat inflation, the Chinese military has certainly greatly increased its capabilities relevant to Taiwan over the previous decades and poses an increasing threat. But it has not amassed anything approaching the level of superior force that would be required to confidently subdue Taiwan while deterring or defeating any U.S. intervention. The Chinese military still operates under a wide array of limitations in weapons, logistics, training, and experience that would make any full-scale resort to force a gigantic roll of the dice. Thus, continuing to sustain such a high risk for Beijing does not require a huge increase in U.S. defense spending, as Colby suggests.

But Beijing would be quite willing to throw the dice if it were to conclude that Washington had entirely discarded its One China policy and decided that Taiwan is a vital strategic asset for the United States that must be kept from China, as a recent senior U.S. defense official has suggested. Such a Chinese attack could come in the form of a blockade or an attempt at an outright invasion of Taiwan, or a lesser but still highly escalatory kinetic action designed to force Washington to reconsider. Any of these would almost inevitably lead to a direct Sino-U.S. clash with disastrous consequences for all.

The Chinese leadership would take this gamble and essentially be willing to fight and possibly lose an initial conflict over Taiwan if the alternative were to risk a permanent loss of the island by doing nothing. Such a national disgrace would almost certainly bring down the regime, given the close link that exists between its legitimacy and the completion of the sacred Chinese task of national reunification. And if the Chinese lost the initial engagement, they would assume that there would be subsequent rounds and thus increase their capabilities even further in order to establish a military advantage in the future. I know of no reputable China security specialist who doubts this.

All this means that to avoid producing the outcome Colby ostensibly seeks to avoid, any “peace through strength” strategy must also include credible reassurances that American strength will not be used to backstop the permanent separation of Taiwan from China. This requires a very credible, continued U.S. commitment to its One China policy, something Colby does not even mention. Indeed, his other writings suggest that this policy could be hollowed out or discarded entirely by bringing Taiwan within the U.S. defense perimeter, i.e., making it into a de facto security ally.

Why does Colby ignore the fact that the Taiwan issue, at root, is not about military balances but political motives? I think it is partly because he is a defense analyst who believes most security problems are nails that only require a solid hammer to resolve. More importantly, I suspect it is because he has not spent any part of his career trying to understand Chinese views on the issue. He simply believes that the Chinese will behave like unrestrained power maximizers, a tenet touted by the offensive realist theory he champions. And so, he posits a People’s Republic of China that goes from seizing Taiwan to attacking Japan, then the Philippines, or any other place in Asia that just might challenge China. This extreme notion lacks any substantive evidence to back it, relying only on theoretical assumptions.

There is a more financially feasible, less provocative, and dangerous approach to the Taiwan issue. Rather than unnecessarily doubling down on defense spending, bringing Taiwan into the U.S. defense perimeter, and denying, in effect, the efficacy of the U.S. One China policy, the United States should adopt a more stabilizing, defense-oriented, and affordable force posture in Asia, along with genuine efforts to reinvigorate the One China policy. And the United States should also coordinate this defense strategy with the more cautious, restrained stance of America's allies in the region. None of them, including Japan, want the kind of militaristic, zero-sum stance toward Beijing that Colby proposes. The same can be said of the American public, who, despite their growing concerns about China, want Washington to engage the Chinese in meaningful diplomacy, not risk yet another war or engage in endless arms racing. This is all spelled out in a recent report by the Quincy Institute, a multi-authored document that includes former U.S. government officials and intelligence officers on the defense budget, the Chinese military, and China's foreign and defense strategy.