Why Congress Must Pass the TPP 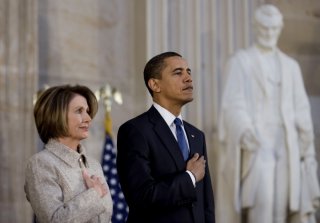 President Obama’s own party last week defeated his central foreign policy initiative in Asia – the legislative package for the Trans Pacific Partnership (TPP) trade agreement— and rendered U.S. policy in the region as unserious. If America is to save its leading role in Asian politics, diplomacy and security, which it has enjoyed since the end of World War II, it has to modernize the economic underpinnings of that role or suffer marginalization. Congress voted for marginalization. It needs to correct that immediately.

This happened as voices in Congress are raising their decibel level over Chinese hybrid diplomacy and territorial salami-slicing in the South and East China Seas. These critics claim the Obama administration is all talk and no action, and they have a point. Across Washington, policymakers and think tanks are searching their thesauruses for tougher adverbs and adjectives to describe Chinese behavior, but uniformly fail to come up with effective alternatives.

The administration stumbled for a year over how to deal with China’s new proposed Asian Infrastructure Investment Bank, and suffered a humiliating diplomatic defeat. China has now launched and promised to fund new initiatives in Southeast, South, and Central Asia, known collectively as “one belt, one road,” (OBOR), which are intended to deepen interdependency between China and its neighbors. The United States meanwhile is struggling to find chump change to help Vietnam and the Philippines defend their maritime territories.

Under these circumstances, instead of continuing to try to persuade friendly governments on China’s periphery that the United States is committed to its “rebalance to Asia,” and therefore to their and its own security, Washington might as well say “never mind.” There are always doubts among such countries that the United States might not mean what it says, especially when a power transition between the United States and China is taking place before their eyes. Now they can see the proof.

And this is occurring on the eve of the annual Strategic and Economic Dialogue between Beijing and Washington, where the two sides are supposed to address the important issues besetting them. Congress could have hardly designed a more effective means of disempowering America’s diplomats to deal with the very issues it is clamoring to see fixed.

What can be done now?

The first order of business is for the House to get the TPP legislative package passed this week. Eleven friendly nations have bet their futures on America remaining deeply engaged in their region by reaching the TPP agreement. It is a vital part of the needed counterweight to a still rising China.

Since the president walked away from his commitment to punish Syria for its use of chemical weapons (a commitment he casually and unwisely made), the administration planted a disturbing suspicion that the United States is not as reliable as it once was. The region’s leaders remained eager to find proof that their suspicion was misplaced, but it never quite went away.

Now, as China beavers away in the South China Sea building islands out of submerged features, the region has watched as Washington developed a near hysteria of rhetoric, evidently without the means to do something about the facts that China is creating on the waters. Instead of repeating futile calls for maintenance of the status quo and cessation of upgrades, which have been flagrantly ignored by all claimants there, the United States should launch an intense diplomatic initiative, preferably partnering with others and not negotiating for them, to address territorial disputes, marine resources, and undersea hydrocarbons.

As China adds air and sea ports to its newly reclaimed islands, the United States should help the Philippines upgrade its contiguous Palawan island facilities at Bautista air field and Ulugan port. Roughly 100 miles from the new Chinese facilities, upgrading these stations will provide a visible counter to them. If Beijing chooses to militarize the new islands, Manila and Washington will have a credible option to deploy forces to Palawan. Meanwhile, the Seabees and Filipino counterparts can upgrade them using the same humanitarian justifications China’s Ministry of Foreign Affairs has claimed. They need not be stymied by the Philippines Supreme Court’s deliberation over the constitutionality of the new Enhanced Defense Cooperation Agreement (EDCA) between the U.S. and Philippine governments.

From 1998 to about 2008, Chinese diplomacy and economic activity with its neighbors were amazingly effective. With the great financial crisis of 2008-09 and the successful hosting of the Beijing Olympics, however, something happened in China to make its diplomacy and economic activity, as well as its rapid military modernization, suddenly appear more threatening to the neighbors. Beijing became more “assertive” about its perceived maritime rights as it acquired the military and paramilitary means to do so.

For a variety of reasons, the Obama administration pronounced its “rebalance to Asia” starting in 2011, pledging to hold American capabilities steady in Asia as it reduced them elsewhere in the aftermath of the Iraq and Afghan conflicts. To most Chinese, it seems, the rebalance was seen as “containment” of China and inherently hostile.

Now it is arguable that China has seen that there was an unnecessary cost in being more assertive and that it needs to change its game plan. Nineteen months ago, new President Xi Jinping hosted a conference to examine its diplomacy toward its neighbors. And seven months ago, he convened another conference on foreign policy that seemed to pull the various strands of Chinese activity together. Beijing’s hosting of the Asia Pacific Economic Cooperation leaders forum last November signaled the beginning of Beijing’s new smile diplomacy.

Therefore, we see today Chinese initiatives intended to link their neighbors more closely to the Chinese economy, through infrastructure connectivity of every type, plus direct investment and trade. I assume this is to add to the gravitational pull of China on long wary neighbors and diminish the attractiveness of the United States. Separately, where China has active disputes, with Japan, the Philippines, and Vietnam, it is keeping up the pressure of physical presence while softening its rhetoric, for the most part.

If you think about it, the two components of inducement and compellence in China’s newly energized diplomacy are likely to have at least one common outcome: diminishment of the value of U.S. alliances and relationships among the targeted nations. This is China’s “counter-balance” to America’s rebalance. It appears to be deadly serious. Now it is time for the United States to be serious, beginning by passing successfully the TPP agreement.

Douglas H. Paal is vice president for studies at the Carnegie Endowment for International Peace.