Why Congress Is Right to Acquit Donald Trump 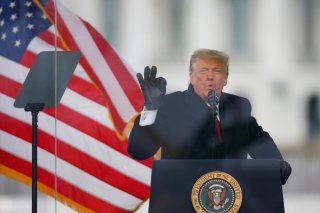 The Oxford Dictionary definition of “twit” is pretty straightforward. A twit, it tells us, is “a silly, foolish person.” Time and again during his four years as president, Donald Trump said and did a lot of silly, foolish things. All too often, his actions were those of a twit, and a twittering one at that.

But being a twit is not an impeachable offense. And despite a barrage of doctored videos, truncated quotes taken out of context, and a lot of shameless appeals to prejudice and emotion, the Democratic prosecution team failed utterly to prove that Donald Trump consciously, demonstrably incited his followers to violent “insurrection” at the U.S. Capitol. The charges simply did not fit the twit. And to adapt a phrase made famous by O.J. Simpson’s defense attorney, the late Johnny Cochran:

“If the twit don’t fit, you must acquit.”

As Bruce Castor, the former Pennsylvania prosecutor and attorney general heading the Trump defense, pointed out in his mercifully brief, succinct closing statement, President Trump urged his followers to behave peacefully, to abide by the law, and to respect law enforcement authorities repeatedly before, during, and after the violence at the Capitol.

Castor also pointed out that Trump’s words couldn’t have triggered the violence since a very small cadre of violent extremists had been plotting and organizing for days and weeks before the events of January 6. The night before the attack, two pipe bombs had been planted on Capitol Hill, and the attack on the protective barriers at the Capitol began before Trump had finished his speech to a rally of supporters elsewhere in the city. It was physically impossible for anyone attending the rally Trump addressed to have been simultaneously present on Capitol Hill when the attack was launched.

From its inception, the revenge-fueled, politically-motivated and illogical attempt to remove a president from office via impeachment when that president was already out of office, has been a farce, and a farce that has wasted valuable time at a moment when our country faces an unprecedented health and economic crisis. It also avoided the fact that there was much violence perpetrated this past summer by the votaries of Black Lives Matter that served as the antechamber for the events of January 6.

It says something about the political paranoia of Congressional Democrats that they are still so obsessed by and afraid of Donald Trump that they have tried to pervert the impeachment process into a tool for political revenge by depriving him of his basic right to seek office in the future.

I am one of many people who opposed Donald Trump for the Republican nomination in 2016, but who voted for him in the general election because I considered his opponent even more flawed, and far more politically corrupt. Ditto in 2020.

I look forward to never having to vote for Donald Trump again. But that choice should be mine, not that of partisan politicians who would bend the impeachment process to declare Donald Trump, the man they love to hate, a non-person in the worst traditions of the old Soviet Union.