Why the Coronavirus Is Making U.S.-China Relations Worse 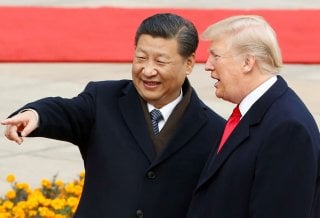 American relations with China were already difficult before the novel coronavirus appeared in January. Now the COVID-19 crisis has made them worse, and that represents a colossal failure of top leadership in both countries.

The COVID-19 episode illustrates both China’s strengths and weaknesses. Its initial censorship, suppression of feedback and curtailment of the free exchange of international information allowed the pandemic to develop. The tight quarantine of Wuhan curtailed its spread, China then launched a government propaganda campaign to promote the theme that it’s behavior had been benign. Worse, a foreign ministry spokesman falsely attributed the origins of the virus in Wuhan to the U.S. military, and many Chinese now believe that.

China has been aided by the Trump administrations fumbling response to the crisis. After disbanding the NSC unit responsible for pandemics, cutting contributions to the WHO budget, and curtailing the impressive sharing of information that had developed between the two countries after SARS and flu epidemics, the administration went from denial to blaming a “Chinese” virus. Of course, a virus could not care less about the nationality of a human.

Beyond the COVID-19 crisis lies a larger question of how to frame American strategy toward China. President Trump’s focus on great power competition and trade wars provided the benefit of a wake-up call in both countries. Although clumsily handled, the Trump administration was correct to punish China for cybertheft of intellectual property, coerced intellectual property transfer, and unfair trade practices such as subsidized credit to state-owned enterprises. Reciprocity needs to be enforced. If China can ban Google and Facebook from its market for security reasons, the United States can take similar steps against Huawei or ZTE.

But Trump’s strategy is inadequate because the information revolution and globalization are changing world politics. Even if the United States prevails over China as a military power, we cannot protect our security acting alone. Regardless of setbacks to economic globalization and the decoupling caused by trade wars, environmental globalization is continuing to increase. Pandemics and climate change threaten all Americans, but we cannot manage the problems alone. And in a world where borders are becoming more porous to everything from drugs to infectious diseases to cyber terrorism, we must use our soft power of attraction to develop networks and institutions that address new threats.

Since Nixon, China and the United States have cooperated despite ideological differences. Rapid Asian economic growth has encouraged a horizontal power shift to the region, but Asia has its own internal balance of power. Chinese power is balanced by Japan, India, and Australia among others. None want to be dominated by China. If the United States maintains those alliances, the prospects are slight that in traditional interstate competition China can drive the United States from the Western Pacific, much less dominate the world. Washington holds the high cards in the traditional great power competition. The question is whether it will play them well.

The more difficult question for an effective national security strategy will be whether the United States and China can develop attitudes that allow them to cooperate in producing global public goods to deal with transnational threats like pandemics and climate change while simultaneously competing in the traditional areas of great power competition. Can we manage a “cooperative rivalry?” Exaggerated fears and worst case analyses may make such a balanced policy impossible.

The current COVID-19 crisis presents a test. First, both sides should agree to de-escalate the propaganda wars. Second, we should realize that if 1918 is a precedent, we will see future waves of COVID-19 after this first wave tapers, and must be better prepared to cooperate. Third, new waves of COVID-19 will affect poorer states less able to cope, and that Third World reservoir will hurt us. Both for self-interested and humanitarian reasons, the United States and China should announce generous contributions to a new UN fund to combat COVID-19 that is open to all countries. And fourth, given how much humans still have to learn from each other about this new virus, we should restore the rich web of contacts among scientists and medical professionals that existed a decade ago. Even better would be to add a binational high level commission on COVID-19 chaired by Vice President Pence and Chinese Premier Li Keqiang to provide political cover and cut through bureaucratic red tape. Otherwise, the lesson of COVID-19 will be that we lack a true national security strategy.

Joseph Nye is a professor at Harvard and author of Do Morals Matter? Presidents and Foreign Policy from FDR to Trump.